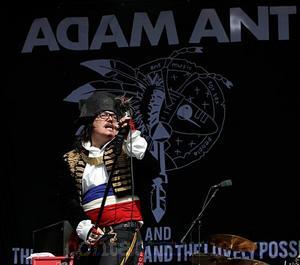 This is really cool! In a new interview posted at ContactMusic,Adam Ant praises No Doubt’s 2009 cover of his classic song ”Stand And Deliver” saying that he feels their version is the best interpretation of the song. He goes on to hail Gwen as one of the coolest women in pop and that it was an honor for him for Gwen to sing ”Stand And Deliver”!

The 1980s icon was delighted when Gwen Stefani’s band No Doubt covered his chart-topping hit Stand and Deliver in 2009, and he is convinced their version is the best interpretation of the song.

Now he has spoken out to hail Stefani and her fellow female performers for outshining their male counterparts.

Ant says, “Gwen Stefani is one of the sexiest, coolest women in pop. She’s amazing, and it’s an honour to have someone like her cover my song. I’ve seen her perform it with Shirley Manson from Garbage and Katy Perry, too.

“If you add Lady Gaga and Pink to that list, you’ve got five women who are saving the music industry. I’m serious – women are ruling the pop music industry and those women have been at the top for a long time.

“I love hearing girls singing my song and making it their own. I think we should sit up and take more notice of what women are doing to pop music these days. They look cool, they make an effort, and they’re incredibly talented. All this is going on at a time when most blokes in music look like they’ve just crawled out of bed with a bad dose of (pubic lice).”