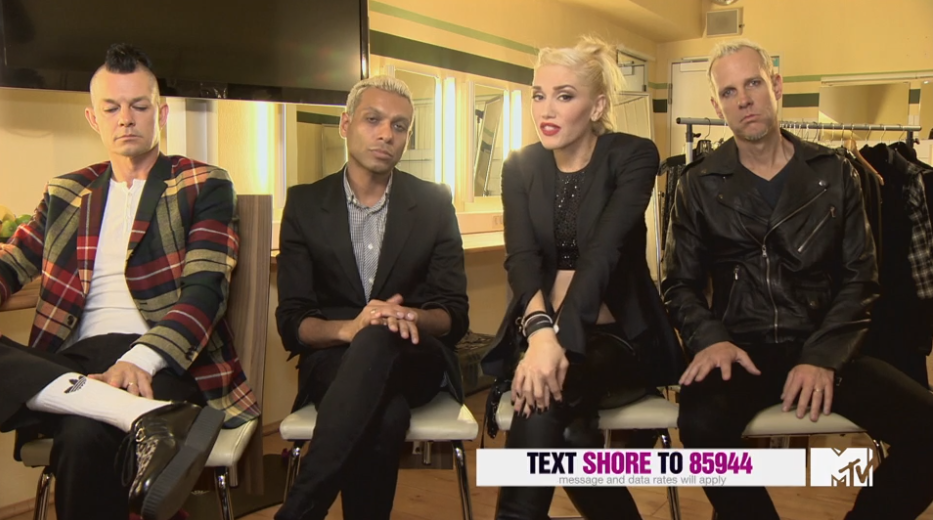 Last night No Dout took part in MTV’s Restore the Shore special for Hurricane Sandy victims,and now the band is doing even more to help those affected by the devastating storm: they have partnered with Charity Buzz to auction off a VIP package for their December 6 concert at Gibson Ampitheatre in LA. The package includes 4 tickets to the show,as well as hospitality passes, backstage access, a merch pack (tee shirts), an autographed copy of the new album, and a parking pass. The current bid is $350 and the auction ends on November 29 at 12:08PM EST;proceeds from the auction will benefit the American Red Cross,which is doing so much for Hurricane Sandy disaster relief. Good luck to anyone placing abid,and thanks again to No Doubt for always being so generous.

You and 3 guests will attend the upcoming No Doubt concert on December 6th at the Los Angeles Gibson Amphitheatre! Included with your tickets, you will also receive hospitality passes, backstage access, a merch pack (tee shirts), autographed copy of the new album, and a parking pass.

No Doubt has achieved a lot as a band, including releasing several multi-platinum albums (1995’s diamond-certified Tragic Kingdom, 2001’s Rock Steady, and a 2003 Singles Collection) and a string of chart-topping hits (“Just A Girl,” “Don’t Speak,” “Hey Baby,” “Hella Good,” “Underneath It All,” and “It’s My Life”). They’ve launched international sold-out tours, won two Grammy Awards and five MTV Video Music Awards, and were invited to perform for Paul McCartney and the President at the annual Kennedy Center Honors in 2010. Lead singer Gwen Stefani has further emerged as a global music and fashion icon via two best-selling solo albums and her L.A.M.B., Harajuku Lovers and Harajuku Mini clothing lines.

Through all the success, the band members have remained grounded by a long-standing friendship that began when Stefani, guitarist Tom Dumont, bassist Tony Kanal, and drummer Adrian Young — bonded by a shared love of ’80s British New Wave and ska bands — began performing together in their hometown of Anaheim, California. Their natural camaraderie, not to mention the musical alchemy that occurs when these four friends play together, is palpable throughout the band’s new album Push And Shove — a supercharged blend of rock, reggae and electronic pop that will remind people why No Doubt has maintained its position as one of the most beloved and commercially successful acts of the past 20 years.

Terms: Valid for the No Doubt show at the Los Angeles Gibson Amphitheatre on December 6th. Meet & Greet is not included. Cannot be resold or re-auctioned. Travel and accommodations are not included.

Shipping and Handling The minimum shipping, handling and applicable insurance for this item is $9.95. Additional shipping charges may apply based upon the location of the winner. Hard copies of tickets, travel certificates and merchandise are shipped via FedEx or professional shipping service. Detailed redemption information for non-tangible items will be emailed to the winning bidder.

Donated by: No Doubt