taken from: US Magazine

US Magazine did an online article about Michelle Obama coming to Gwen’s home for “Sunday Of Fun”. Below are a few more details of The First Lady’s speech: 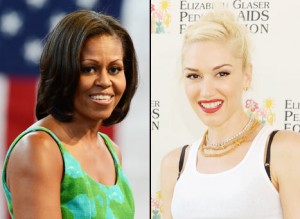 Being an A-list celebrity and successful fashion designer can bring in a lot of perks. For Gwen Stefani, it’s transforming her Los Angeles home into a fundraising site for the First Lady of the United States, Michelle Obama.

Hosted by the 42-year-old No Doubt singer and her bandmates, the event’s 400-person guest list included celebrities Nicole Richie, 30, Joel Madden, 33, Alyson Hannigan, 38, plus their respective broods. Tickets for the reception started at $2,500 with proceeds benefiting the Obama Victory Fund, a joint fundraising committee of Obama for America, the Democratic National Committee and several state Democratic parties.

“Getting ready for Michelle Obama to come for a Playdate,” Stefani tweeted early Sunday, hours before the crowd arrived. Meanwhile, No Doubt drummer Adrian Young posted, “On our way to meet the First Lady! Life in (No Doubt) land gets more strange and wonderful everyday.”

Among the festivities offered at the day of fun: face painting, balloon animal construction, and passed refreshments including roasted steak and chicken, cookies and fresh fruit.

Before she buckled down to business, the First Lady had some housekeeping/shout outs for her gracious hosts.
“I want to thank Gwen, in particular, for being so kind and gracious and hosting us all here at her beautiful home,” Obama, 48, said during the opening of her speech. “And even though Gavin [Rossdale] couldn’t be here, I also want to say a special thank you to him as well, and also to Kingston and Zuma,” she added of Stefani’s husband of nine years and their sons, 6 and 3, respectively. “I mean, they are letting all of us just enter their house, all the chaos, and they’re being so good about it today. So thank you, guys, for letting us come — indeed.”

Her opening remarks were followed by a discussion on why the group was gathered in the first place: her husband’s campaign for reelection this fall.

“Barack can’t do it alone. He’s not Spider-Man. He’s not a superhero. He’s a human, so we need your help,” Obama, 48, who was sporting a sleeveless navy dress and flat sandals, told the crowd. “I am not just talking to the adults here today. I am talking to the young people here as well. All of our young people — you might not be old enough to vote. You vote at school, I know — I met several young people who are going to be voting for my husband, who are 10 and under — we accept those votes,. But you can play an important role in this election, too. I want you all to feel empowered.”

“Every now and then I’m known to make a mistake,” Romney, 65, explained to reporters in Norfolk, Va. “I did not make a mistake with this guy.”