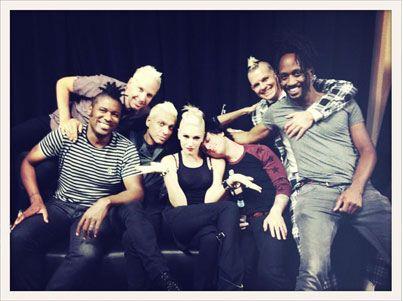 Billboard has revealed some No Doubt-related moments from backstage at the iHeartRadio Music Festival in Las Vegas last night involving P!nk and Billie Joe Armstrong from Green Day.

2. No Doubt’s Biggest Fan: P!nk | The currently blonde-haired, carnation-named singer nearly spoiled No Doubt’s surprise (shared via @IHeartRadio on Twitter minutes before their opening performance) to anyone in Clear Channel’s VIP seats by openly singing (and dancing) along to the band’s hits-heavy set (“Hella Good,” “Spiderwebs,” “Don’t Speak” and “It’s My Life” were all played) before jumping on stage to share vocal duties with Gwen Stefani on “Just A Girl.” “I just got off stage from the raddest surprise performance with No Doubt. She really is that cool. #imjustagirl,” Pink tweeted after the show. The singer opens Night 2 of the festival – perhaps Stefani will return the favor on “Get This Party Started”?

5. Green Day and No Doubt’s Filthy Love Fest | Following a touching, tear-fillled trip through the press room that included a heartfelt chat about makeup with Gwen Stefani and “The Ellen Show”‘s 13-year-old correspondent Talia, an aspiring makeup artist who won a trip to cover the Festival for “Ellen” and become an honorary CoverGirl in the process. No Doubt’s visit took a turn for the blue during a surprise reunion with fellow 90s rockers Green Day. “If I wasn’t married I’d fuck the shit out of you!” an ebuillent Billie Joe Armstrong declared to a clearly non-plussed Stefani. Instantly saving the vibe from turning uncomfortable, No Doubt drummer Adrian Young immediately retorted, “And if I wasn’t married, I’d fuck the shit out of YOU!” to Armstrong, amid thunderous laughter from both bands and all witnessing media. Incidentally, noted guyliner fan Young also traded makeup tips with Talia, sharing the secret to his look was careful penciling then a harsh pressing of the knuckles across his eyelids.