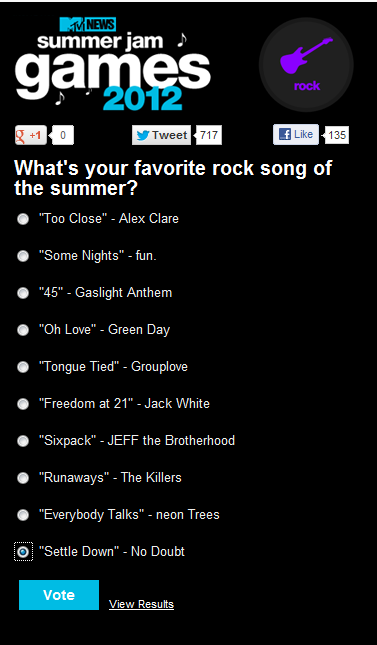 In honor of the Olympics,MTV is holding its own Summer Jam Games,bringing together the best of the best to compete for gold, silver and bronze medals in their genres of music,and ”Settle Down” is in the running in the Rock genre!! Voting is now open — you can help spread the word via Twitter, using the hashtags #SJG and #SummerJamGames — and polls will close at midnight ET on Sunday,August 5. Be sure to vote for No Doubt and spread the word to help ”Settle Down” win the gold!!

VOTE FOR ”SETTLE DOWN” FOR FAVORITE ROCK SONG IN MTV’S SUMMER JAM GAMES!!!!

Kanye West, Carly Rae Jepsen, Justin Bieber and more are all vying for the song of the summer in MTV’s inaugural Summer Jam Games.

The Olympics are officially underway in London, but they’re not the only games going on: After a lavish opening ceremony on Friday (we lit a torch and everything), today, we’re kicking off the first-ever Summer Jam Games, where the biggest names in the business will go head-to-head for summer supremacy … with your votes determining the winners.

Like the actual Olympics, the Summer Jam Games bring together the best of the best — the Kanyes, Katys, RiRis, Biebers and Green Days of the world — to compete for gold, silver and bronze medals in their respective genres. Voting is now open — you can help spread the word via Twitter, using the hashtag #SJG — and polls will close at midnight ET on Sunday (August 5).

On Monday (August 5), we’ll announce the winners in each genre with an elaborate medal ceremony — anthems and everything — and all this week, we’ll be breaking down the action with in-depth analysis from the MTV News braintrust. The competition for the Summer Jam gold is sure to be fierce, and with acts from all over the globe (the U.S., Canada, Barbados, Sweden, Turkey, wherever David Guetta’s from) in the mix, anyone could come out on top. Of course, you get to decide who comes out on top.

And so, without further ado, here’s a look at the field of acts competing in our inaugural Summer Jam Games. From battle-tested vets to upset-minded rookies, they’ve each trained hard to get here, and now, with dreams of gold dancing in their heads — and some serious summer-jam cred to their names — they’re looking for your votes. Who has the hottest song of the summer? We’re about to find out … let the games begin!

Forget about the Olympics, vote now in MTV’s Summer Jam Games! Polls are open and will close at midnight ET Sunday (August 5). Guide your favorites to golden glory, and help spread the word via Twitter, using the hashtag #SummerJamGames