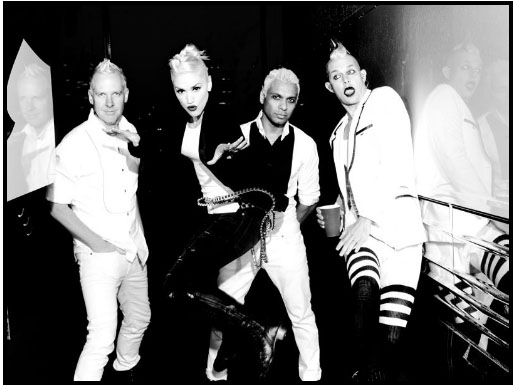 Heads up,No Doubters!! MTV is holding its third annual Musical March Madness Tournament,in which 64 bands are pitted against each other in bracket voting and fans determine who advances to the next rounds,and No Doubt is one of the groups in the running!! Voting begins on March 12,and first-round voting runs until midnight ET on Sunday,March 18;No Doubt is the 10 seed in the West division and is up against Van Halen in the first round. No Doubt was included in last year’s Musical March Madness,but unfortunately lost to Paramore in the first round. Let’s help No Doubt go all the way this time and be crowned the MTV Musical March Madness champion when the tournament ends on April 3-the winner gets a cool huge gold trophy(and of course major bragging rights!) To help spread the word to vote for No Doubt,we can use the hashtag #MMM on Twitter like this:

We can also use this official No Doubt MMM badge as the profile on our social networking accounts:

Let’s be sure to keep voting for No Doubt and spreading the word to any No Doubters we know!!!

It’s back! MTV’s third annual Musical March Madness tips off March 12,pitting the 64 bands that matter most against each other in a bracket-battle to the death (OK, no one actually dies, but we’re rolling here). And like in previous years, your votes determine who advances on — and who will ultimately hoist the big gold trophy when the tournament ends April 3.

Can Green Day repeat as MMM champs? Will perennial powerhouses My Chemical Romance, 30 Seconds to Mars and Paramore finally make it to the top of the mountain? Or will 2012 bring us another unheralded winner, a la Coheed and Cambria in 2010? All of these questions — and more — will be answered in the coming weeks, as the drama and majesty that is Musical March Madness plays out before our very eyes.

You can help your favorite band advance by downloading one of our MMM badges below (they look smashing on any social profile), or by spreading the word via Twitter, using the hashtag #MMM.

Who will reign supreme? Well, it’s up to you. But let’s take a look at the 64 bands that will compete for the 2012 MMM title!

West
For the third year running, the West is most definitely the best — bracket, that is. The Foos sit atop a positively loaded field, with established acts like last year’s champs, Green Day, #2 Red Hot Chili Peppers, #3 Blink-182 and #4 Maroon 5, and a host of hotly tipped newcomers, including #6 Foster the People, #8 Best Coast and #13 Lana Del Rey. Plus Van Halen and No Doubt. We wouldn’t discount 15th-seeded Panic! at the Disco (Elite 8 the two previous years) or tourney-tested Adam Lambert, either. If you’re looking for a dark-horse pick, our money’s on Skrillex, who might not technically rock, but used to front From First to Last, and based on his thunderous live sets, definitely knows how to move folks. The first-round matchups are:

MTV’s 2012 Musical March Madness Tournament is underway! Voting in the first round runs until midnight ET on Sunday, March 18, and winners are determined by fan votes, so if your favorite act made the cut, it’ll be up to you to guide them to glory. You can rally the troops on Twitter using the hashtag #MMM or by downloading one of our custom badges-but get ready, it’s gonna be a war.

1 thought on “Vote for No Doubt in MTV’s Musical March Madness!!!”