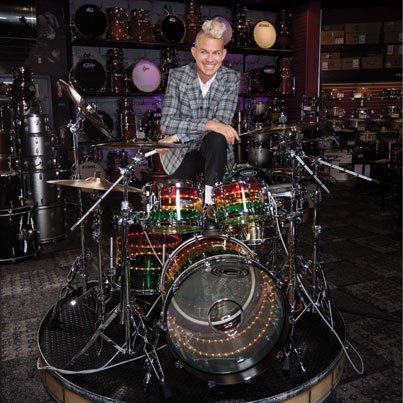 KROQ is having a poll where fans can vote for the Greatest Rock Drummer Of All Time and of course our favorite drummer,Adrian,is in the running! Be sure to vote for him and spread the word to every No Doubter you know-voting closes Friday, November 16 at 10AM PST and the winner will be revealed Monday, November 19 at 10AM PST!!

They’re literally the heartbeat of their bands, providing the rhythm that powers the music of bands from all genres. From the legendary stomp of late Led Zeppelin bash-master John Bonham to the intricate complexities displayed by Rush’s Neil Peart to the hip-hop-influenced punk beats of Travis Barker, the list of legendarily talented rock drummers is as varied as it is vast.

In a musical world where DJs, drum machines and computer-generated beats continue to encroach on the realm of actual drummers, these trap-masters and their bands keep it real with flesh and blood rhythms.

Narrowing the field down to 40 (or so) of the best beat-keepers to ever rock a kit, it’s your votes that will determines who reigns supreme as the single greatest rock drummer of all-time.

Support your favorite drummer in the poll below!

Adrian Young (No Doubt) Notorious for his wild style and propensity to rock out with his, um, naked, Young is also famous for his metronomic sense of rhythm, snagging him lots of session work on the side.