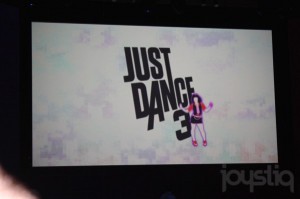 Thanks to Memo for the info,”What You Waiting For” will be included on Ubisoft’s Just Dance 3 dance video game,which is due out on October 11. The game will be available on “all motion platforms”–meaning another appearance on Wii,and its debut on Kinect and PlayStation Move.

While it may seem unthinkable, Ubisoft took the wraps off of Just Dance 3, the latest sequel to its massively successful series of dancing and/or embarrassment simulators. The trailer featured all sorts of professionally attractive people having a good time and who are we to judge them? Have you seen what we look like?

Just Dance 3 is coming to “all motion platforms” – meaning another appearance on Wii, and its debut on Kinect and PlayStation Move – on October 11.

Update: Ubi just sent over a press release with some more details on the game, including console-specific features like the Wii’s “four-player choreographies and dynamic environments” and Kinect’s “Shout Out!” feature “which allows players to score extra points by belting out their favorite song verse.” The first confirmed tracks include: