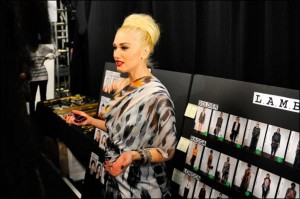 Gwen has been named one of the Best Celebrity Entrepreneurs by Fox Business for the enormous success of her fashion lines.Much congrats to Gwen-wishing her continued success with L.A.M.B. and Harajuku Lovers!

No matter how many red carpets you’ve walked, fame alone can’t sell a brand. Check out startup dos and don’ts from A-list entrepreneurs.

Incognito brands work for clubs or restaurants, which must blend into the local culture. But when it comes to fashion, fragrances or image-enhancing products, packaging a whiff of the star’s fame, fortune and sex appeal is exactly the point.

Snowboarder and skateboarder Shaun White, for example, with older brother Jesse, has translated his two-time gold medalist cool into edgy casual clothes and gear for young men and boys. The brothers know their target demo and sell at moderate-income, mass-market outlets like Target.

Gwen Stefani likewise went upmarket, launching L.A.M.B., a clothing line Forbes dubbed a perfect mix of the singer’s “sassy style, mixing Japanese schoolgirl, English governess and Southern California punk teenager.” Plus, Stefani owns the line rather than inking a licensing deal with a producing partner. Instead of a hefty up-front fee and 8 to 10 percent of revenues, Stefani likely is reeling in about 12 percent on an estimated $100 million in annual sales.