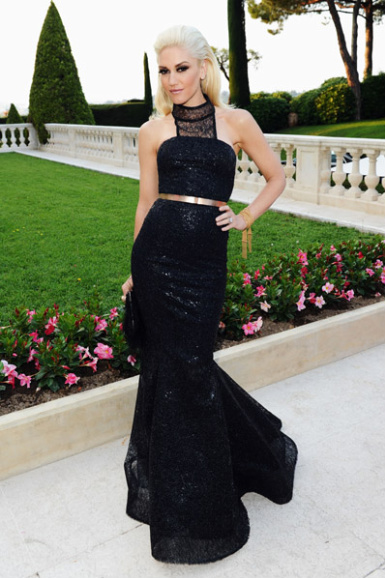 Earlier this week there had been rumors that the gorgeous L.A.M.B. gown that Gwen wore to the amfAR gala and later auctioned off at the gala’s auction for over $127,000 was not designed by Gwen herself but rather by designer Michael Angel;the rumor was sparked by Mr.Angel’s appearance in THIS behind-the-scenes video uploaded by L’Oreal,in which Mr.Angel is billed as Gwen’s stylist for the gala.Thankfully,Michael Angel has released a statement reassuring eveyone that Gwen DID indeed design the gown and that he looks forward to working again with Gwen in the future.We are so glad that this unfortunate rumor has been cleared up-we knew Gwen would never take false credit for a design,she is much too honest,sincere and gracious!

This statement is being attributed to Michael Angel. “Earlier this week a former employee from my camp spoke to the press without having full knowledge of the collaboration between Gwen Stefani, L.A.M.B., and me. I strongly want to reassure everyone that the dress was designed by Gwen Stefani for L.A.M.B. to wear and be auctioned off at the amfAR gala. I’m disappointed that the focus has shifted away from what Gwen and I originally intended, which was to create a custom outfit for a great cause. We both were thrilled with the outcome and enjoyed the process. I have nothing but respect for her and look forward to working with her on more projects in the future. I can assure you that this is my only comment on this matter and any other quotations or statements written on my behalf are false.”