A while back we mentioned how Gwen was being included in the Women Who Rock: Vision, Passion & Power exhibit at the Rock & Roll Hall of Fame in Cleveland,Ohio,which opens May 13,and will run through February 26 of next year. Now it’s been revealed by ABC News Radio that the item of Gwen’s that will be featured in the exhibit is one of her tour outfits from the 2004 No Doubt Singles Tour.There doesn’t seem to be any exhibit photos of the outfit yet,but if anyone going to the exhibit manages to take any photos,please send them in! Much congratulations again to Gwen on deservedly being included in such an historic exhibit!

Called Women Who Rock: Vision, Passion & Power, the exhibit traces the influence of women in rock and its related genres over nearly 100 years. Organized by era, it highlights the female blues singers and country artists of the 1920s, the early female rock ‘n rollers of the fifties, the girl groups, rock icons and singer-songwriters of the sixties, the disco and punk queens of the seventies, the music video stars of the ’80s, the teen idols of the ’90s and the massive pop stars of today. Jim Henke, the chief curator of the Rock and Roll Hall of Fame and Museum, tells ABC News Radio, “I think when people think back, they always think of the men in rock and roll, but the reality was that, going back to the roots, women have played an important role, and we really wanted to show that.”

On display in the exhibit are artifacts and memorabilia from the most famous female musicians of all time, as well as from today’s hottest stars. There are quite a few pieces from Taylor Swift, who says, “When I picture the phrase ‘Women Who Rock,’ I think of guitars, I think of writing songs, I think of telling stories. I think of connecting with your fans on a level that’s very personal. And, y’know, hair flying and stuff like that. Those are all things that spoke to me, in artists that I loved and looked up to.” Among Taylor’s favorite Women Who Rock: Shania Twain, Stevie Nicks, Pat Benatar, The Dixie Chicks and Faith Hill.

Here’s a rundown of some of the coolest stuff you’ll get to see at the Women Who Rock exhibit:

-Lady Gaga’s legendary meat dress, and her childhood piano.
-Madonna’s tuxedo from the Girlie Show tour, her gold Jean Paul Gaultier bustier and panties from the Blonde Ambition tour, and the handwritten lyrics to “Erotica.”

-Cyndi Lauper’s iconic thrift-store outfit from the cover of her smash album She’s So Unusual.

-Joan Jett’s guitar, leather jacket and lyrics to “I Hate Myself for Loving You.”

-Stevie Nicks’ handwritten lyrics to “Stand Back” and her stage outfit.

-Aretha Franklin’s dress from her first performance at Radio City Music Hall in 1979.

-Nancy Wilson of Heart’s guitar from 1987, and the dress she wore on the cover of Rolling Stone in 1977.

**UPDATE** Thanks to our friends at Beacon Street Online and Johanna,check out photos from the exhibit-apparantly in addition to Gwen’s 2004 Singles Tour outfit, a pair of Tom’s shoes and a guitar of his from the Rock Steady tour are also included in Gwen’s display.Also in the Hall of fame is a footall signed by the whole band(except Gwen)and Sting from their performance at the 2003 Super Bowl Halftime Show,and the signs used in Moby’s ”Southside” music video which featured Gwen-very cool!! 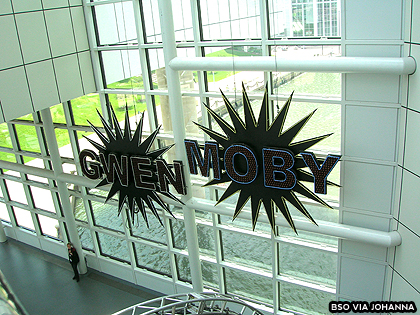