Another day,another lucky fan named Hannah who met Gwen and Gavin outside their Primrose Hill home in London! Congrats to Hannah,who shared her amazing story and photos on the No Doubt forum.She met Gavin and later Gwen yesterday outside their home,and got photos with both of them-Kingston and Zuma even wanted to be in the photo Hannah took with Gwen! Gwen also signed Hannah’s L.A.M.B. bag-she is always SO gracious to the fans!! 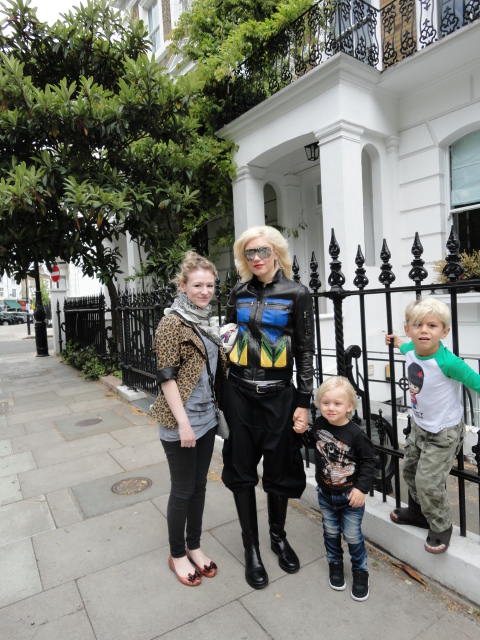 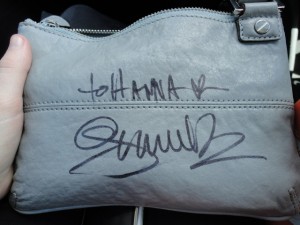 Hey!! I am absolutely completely amazed/ecstatic/excited/shaking at the fact that I just met GGK&Z yesterday!! I went to London specially to visit Gwen’s house (not to intrude, mostly out of curiosity) I wasn’t even really expecting anything to happen out of the day, but then all of a sudden, Gavin walks out of the house and agrees to take a picture with me! A couple of hours after, a taxi pulls up and I see platinum blond hair and completely freak out! I run over to the house and then realise that It’s just the nanny with King and Zuma (Still exciiting though!) Then I literally waited in the park opposite her house for 3 hours, with paparazzi turning up everywhere, and suddenly Gwen walks out with Zuma and Kingston! I was so unbelievably excited, and so really really badly wanted a picture with Gwen, but I thought that as she was by herself with the 2 kids, there’d be no way she’d say yes…. BUT SHE DID! And not only did I get a pic with Gwen, but King and Zuma wanted to be in the photo too!! I then walked back to the park where I was originally, and I realise that Gwen’s following me! Gwen was there with K, Z, their nanny and Kingston’s godfather. Turns out that they were all going to the park to fly a kite, which the kids had never done before! After about 20 minutes, Gwen starts running back towards the house, as if she’d forgotten something, and it’s just at this point when I remember that I wanted to get her to sign my L.A.M.B bag! So I kind of run after her (it wasn’t as stalkery as it sounds!! :P) And waited for to come back outside her house and across the road when I kindly asked her to sign my bag, Gwen being one of the most gracious celebrities out there, says she’ll sign it! Btw, I was actually so, so surprised at how helpful the paps were in helping me meet Gwen! One of them told me to run over quickly now before they all swarm, and it was then that I managed to get the pic with her! AAHH! sorry if my story was a tad long-whinded!!