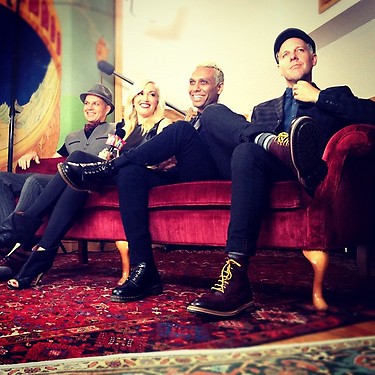 New York City radio station Fresh 102.7 has posted a great new interview with No Doubt;listen to the full interview here,and we also uploaded it to youtube.

’90s ska-rockers No Doubt are back in the game with their brand new album “Push & Shove,” out on September 25th. The first single off off the new CD, “Settle Down” has been taking over the airwaves for the last few weeks and the band has already released a video for the song. Oh, and the band performed at this year’s Teen Choice Awards, too.

No, they’re not wasting any time.

In case you missed the new video, the four members of the band play the roles of truck drivers/rock stars. This got Fresh 102.7′s Dylan thinking: “Have No Doubt ever had to drive their own equipment around and can anyone in the band actually drive a big rig?”

When Dylan had a chance to sit down with Gwen Stefani, Adrian Young, Tom Dumont and Tony Kanal on their recent press tour, he got the answers to those questions and so much more.

“I can, yeah,” says Gwen. “I’ve done a lot of driving on tour. I used to drive the trailer… I’m not exaggerating!”

“She’s not kidding,” says bassist Tony Kanal. “When we first used to tour we used to have a big 12 passenger van – which we’d put 15 people in – and then we’d have this trailer behind us. And we’d take turns, we’d actually flip a coin to see who was going to drive that night. Whoever wasn’t driving could have some drinks, whoever was driving had to not drink.”

“And they made me do it,” says Gwen. “I had to drive with the sun coming up in a cornfield, hoping I’m not going to kill everyone because I’m so tired… rolling the window down trying to make sure the cold air kept me awake!”

Back in 2010, the band performed a medley of Beatles hits (with their own twist) at the Kennedy Center Honors ceremony which was attended by Sir Paul McCartney himself, seated next to Oprah Winfrey and Barack & Michelle Obama.

“It was incredible,” says Gwen. “It was really, really fun. And to watch them all swaying to the music up there, it was surreal.”

After the performance, Paul “was very complimentary,” says Tony, “and that was so reassuring… that’s like the pinnacle!”

More recently, Gwen Stefani hosted First Lady Michelle Obama at her home to celebrate families and benefit the Obama presidential campaign. “It was like a little picnic with face painting and all stuff for children to do,” says Gwen. “What was really great was just listening to her speak. She talked about what was important to her… she’s just very gracious and very inspiring. It was another one of those weird ‘is this happening?’ moments.”

“Gwen introduced her,” says Tony. “To watch our band mate get up there and introduce the First Lady was incredible.”

Now that everyone in the band has their own family and kids, writing songs for the new album became a constant struggle while finding the time and energy to get both the parenting and rock star jobs done.

“Every single album was different,” says Gwen. “‘Tragic Kingdom’ took three years on Beacon Street in a garage that we built [with an] 8-track recorder that the record company graciously bought us. Then with ‘Return To Saturn’ we rented a house up in the Hollywood Hills and half the guys lived there…. that was a really struggled album coming off the success [of Tragic Kingdom]. Then with ‘Rocksteady’, it was this lighthearted fun thing we were writing in Tom’s bachelor girl-trap pad…”

“This one was a real struggle to get together and find the time to do it,” Gwen continued. “We wanted to do it so badly, and that desire, the fight is what made it so great.”

“Especially for Gwen being a mom and having to leave her two boys and come to the studio.” adds drummer Adrian Young. “All these sacrifices and the struggles to schedule and make it all happen. But we all really wanted to make this record and obviously that’s why we did it. Now it’s so amazing to be sitting here talking about it!”