Tom shared on his Instagram a photo of his awesome new Spirit of ‘79 guitar by GJ2 Guitars-he posted a link to more info on the guitar and promised to share more photos of it when he picks it up next week. Congrats to Tom on another rad addition to his axe collection! 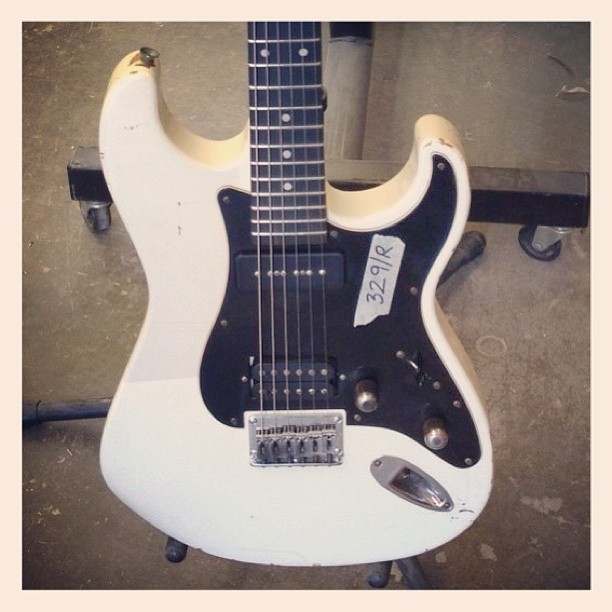 This a shop picture of my new “Spirit of ’79” by @gj2guitars -I’ll post some close-ups when I pick it up next week. It has 1 humbucker, 1 TD91, ebony fingerboard and hardtail bridge.

Everything old school is new again it seems.

In response to repeated customer requests, GJ2 Guitars is releasing a new limited edition model—the Spirit of ‘79™— that harks back to the early days of Grover Jackson’s guitar-making career in both look and feel.

The “Spirit of ‘79” series is a “distressed” modification of the GJ2 Glendora guitar line. Production will be limited to 40 guitars in all (10 white, 10 red in the USA; another 10 white, 10 red for international markets).

Made using an ash body, maple neck, rosewood fingerboard, Floyd Rose tremolo system, and in-house made Habanero™ pickups, the model is available in Antique White with black pick-guard, or Candy Red with white pick-guard. Pickup options include single humbucker, or humbucker/single/single configurations. The Spirit of ’79 is priced from $1999. Like all GJ2 guitars, this new limited edition line is built at the company’s headquarters in Orange County, California.

GJ2 Chief Mechanic and Visionary Grover Jackson has always been a good listener, making guitars based on what players say they want. By offering the Spirit of ’79, “We’re responding to multiple requests for an aged instrument that echoes the beginnings of Grover’s career,” explained Chief Enthusiast and Optimist and GJ2 co-founder Jon Gold. “We get requests from our customers in much the same way a band does. Popular bands can’t just perform new material every time out, they have to play their hits, too. Although GJ2 is a new company, Grover Jackson has created many ‘hit’ guitar designs that have remained popular since he began building back in 1979. So for us, The Spirit of ’79 embodies that era, as well as a new beginning.”

While test-driving the new GJ2 Spirit of ’79 model, Grover declared, ”It’s the kind of guitar you don’t want to put down.”