We LOVE the new No Doubt photo shared by the LA Times in an article about the 6 Gibson shows! http://www.latimes.com/entertainment/music/posts/la-et-ms-no-doubt-concerts-gibson-amphitheatre-20120904,0,6961071.story The article mentions that a full profile of No Doubt is coming in Sunday’s Arts & Books fall preview section. Thanks Edgar for sharing! 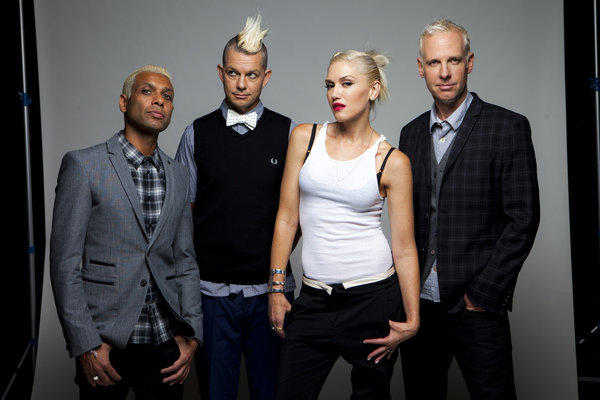 Following the release of No Doubt’s first studio album in 11 years, “Push and Shove,” the long-running band will settle in for a hometown stand of six shows later this year at the Gibson Amphitheatre.

No Doubt will headline Nov. 24, 26, 28, 30 and Dec. 2 and 4 at the theater, with priority tickets becoming available first to members of the group’s ND2012 Club. There will be a limit of four tickets per person, and prices are set at $115 all inclusive, according to the group’s website. Ticket presales begin Thursday, with a general on-sale date still to be announced.

In preparing to write and record “Push and Shove,” No Doubt played 58 dates in 2009, primarily at sports arenas and large amphitheaters, and drew an average of more than 15,000 fans per show, according to Pollstar. That tour grossed almost $34 million and was among the Top 25 grossing tours of the year.

The No Doubt website states that there is no membership fee for the ND2012 Club, and that tickets purchased through the club will include not only priority seating but also early entry to the amphitheater and a commemorative pin and postcard set with each ticket.

Presale information is available at nodoubt.tickets.musictoday.com

A full profile of No Doubt is coming in Sunday’s Arts & Books fall preview section.