Thanks so very much to the adorable Lacey Noel for sharing with us her amazing blog post,photos and videos about her experience attending the Gibson shows,including being pulled onstage on Night 6 and having Gwen sign (and kiss!) her sketchbook! Much congratulations again to Lacey!!!! 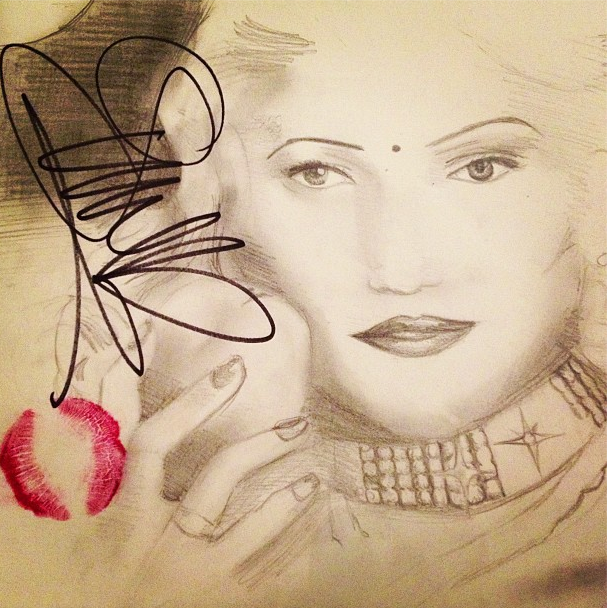 For the past two weeks, I have been rather busy. I am very proud to say that I’ve been busy going to quite a few No Doubt shows at the Gibson Amphitheatre! We’ve been to five out of the seven of them!!

Night One was really exciting. Especially since it was the very beginning of their “Seven Night Stand”! For this night, we sat more towards the back of the venue. Although it seemed a little distant from the stage, I liked it because you could see what was going on on the whole stage.

When they came out, my eyes got all watery. I haven’t seen them since their last tour and I was so happy to see them again. I danced and sung along until they got to their sentimental songs which I started to cry to. Their lyrics are just so powerful and from growing up listening to these songs, it brought back so many memories and so I got a bit emotional.

And I think Gwen got a little emotional, too… Right after they played the last note of Sparkle, I could’ve sworn I saw two tears stream down her cheeks. She’s so amazing… I love how she puts so much feeling and emotion into music.

That night, when we went home, I made a video expressing my feelings for the band. I’ve been a fan my whole life and through their albums playing all the time, I learned what music was through them. They mean so much to me…

The Second Night was even better. Originally, we only planned to go to the first and last concerts of the Seven Night Stand, but we ended up winning tickets! The seats we won were much closer and that meant we could see the band a bit better!

When they performed certain songs, it almost seemed as if Gwen kept looking at us! When she pointed at us, me and my mom were shrieking in excitement!

One of my favorite parts about the show was when they performed Looking Hot. Gwen had changed into an amazing sparkly red outfit that she was definitely “Looking Hot” in!

The Third Night was pretty rad as well. We had seats that were pretty close to the stage again! They performed perfectly, I cried again, and also… I got interviewed for their website!

When the show came to an end, she pulled some fans onstage! I was very happy for them, but as each night went by, I started to lose a little hope. It seemed like whenever I got closer, she got farther away. That night I even had this wonderful dream that she pulled me onstage and took a photo with my drawing I did of her. I woke up the next morning sadly disappointed. It was my biggest dream to meet her. I’ve wanted that so much…

But the night I want to focus on is Night 6: the most amazing No Doubt show I’ve ever been to, and also it was the best night of my life. Since LiveNation saw my video, they gave me and my mom free pit tickets! We rushed to the pit and waited and waited until our favorite band arrived.

The concert is even better if you’re in pit!! When Gwen was singing, dancing and walking around, I now could tell that she WAS making eye contact with me!! They performed a few more amazing songs and after they ended New, the blonde, beautiful woman came back to our side saying “Now, there’s this little girl…”

My eyes grew wide and my jaw dropped. “Oh, my god… Oh, my god…” Was the only thing I could say. Was she talking about me?!
“She needs to get up here!”

I started to feel a bit… Sparkly. (The sensation i have throughout my body that is a sign that i might faint.) I handed my mom what I thought was my sign and I attempted to get onto the stage myself.

“Can’t you just pick her up? She’s like 40 pounds!” Gwen jokingly suggested to the security guard in front of me. The man, much taller than I am, picked me up and took me to the stage. There she was.

This can’t be happening.

The first thing I did was cover my mouth with my hand. She was so beautiful and I couldn’t believe this was happening. I wanted to cry, but I was in so much shock, I didn’t. I walked up to her and gave her a hug. “I wanted to see what you look like, you are so CUTE! Oh my god!” She pointed to my purse and said, “That is some old school Harajuku Lovers, girl!!! I felt the crowd cheering as I said “I have something for you.”

I took my sketchbook out of my purse and showed her the drawing I had been working on of her. “Aw, look at that! It’s so GOOD!” I pulled out a sharpie and she baptized my drawing with her signature and a kiss. We hugged again and she smelled so good! As we parted, I bowed and blew her a kiss and she put her hand to her chest and made a motion with her hand like blowing a kiss.

I don’t know how I got off stage, but when I was reunited with my mom… It was such a powerful moment. We were sobbing and sobbing… “I-I’m so happy f-for you” my mom kept saying. My mom was a huge No Doubt fan who gave birth to a huge No Doubt fan. My whole life I’ve admired them and it meant everything to me to have met her. Those words now sound so strange to me…

I’ve been trying for so long and it finally happened. It finally happened… The next song they played was Hey You and it was almost coincidental that they performed it after I met her. I used to relate to the lyrics because I always thought that meeting her would just forever remain as a fantasy in my mind.

“Hey you with the dreams in your head, You’ve been so mislead by your heart’s pull… I know you’re waiting for your ship to come in, You anxiously wait for such a long time… Hey you with the eyes full of hope, You think you can rope your desire… I know you’re waiting for your tide to roll in… How did you ever set such high hopes? …You’re just like my Ken and Barbie Doll… In a plastic world of make believe.”

I no longer have to relate to that song anymore. I no longer have to feel sad anymore. Back when I went to my first concert, Gwen’s Sweet Escape Tour at the Tweeter Center in Camden, NJ back in 2007, I thought that that day was the greatest time in my life. Who knew that when I was crying out in the field watching the show that five years later I would be ON STAGE with this marvelous woman… Who knew that when my mom carried me in her arms singing Don’t Speak as a lullaby to me that someday I would be in the arms of the wonderful woman who sang that song. Who knew…

Ugh… I am just so happy. That night was the greatest time of my life. I met my idol and I now have an even better relationship with my mother. She is the best mother I could ever have…

The last show was amazing. They played Excuse Me Mr. and Gwen pulled some more lucky fans on stage! I felt incredibly happy for them, knowing how good meeting Gwen feels. I love how much they appreciate their fans and it makes me love them even more.

I am so blessed with the honor of Night 6. So blessed!! I will treasure the signed and kissed drawing and treasure that moment for the rest of my life.

I would like to give a special thanks to LiveNation for the tickets and my mom for being the best mother ever. I love you, mommy. You are best friend and mother I could ever have…

Photo credit: Jason DeBord of Rock Subculture, Missy (I like to call this woman, “Mommy”) of Miss Missy Photography, Leslie and Keith.

This is a video I made after I finally met Gwen. Please watch: