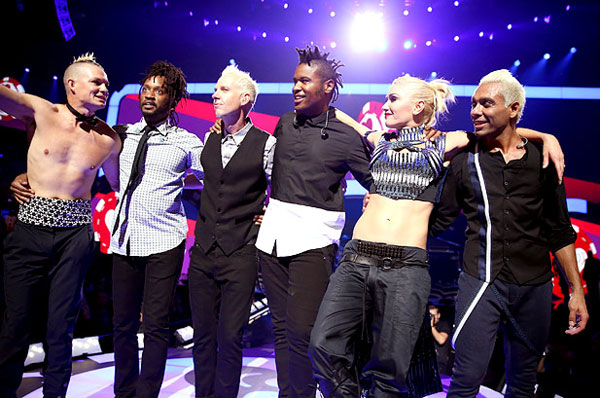 YAY! This is just amazing! According to Rolling Stone, No Doubt will be one of the headlines on 2014’s Free Global Citizen Festival! It’s the first time in 2 years that No Doubt will be playing a show! The Festival will be taking place this year on September 27th on the Great Lawn in New York’s Central Park!

We couldn’t be any more excited!

It may surprise some to see a hip-hop icon like Jay Z — the rapper who helped personify the idea of ostentatious wealth — go hard to end world poverty, but that’s exactly what you can expect at the upcoming 2014 Global Citizen Festival.

The rapper will headline the annual charity event organized by the Global Poverty Project, taking place this year on September 27th on the Great Lawn in New York’s Central Park. Of course, Jigga has always claimed that his blinged-out persona was in service of inspiring the less fortunate, and S. Carter is committing to these ideals with his Global Citizen Festival appearance. “Change only takes place when and where there is action,” the rapper said in a statement. “I’m joining the 2014 Global Citizen Festival because I believe through actions, whether it be by raising awareness, getting involved or educating ourselves, the goal to end extreme poverty by 2030 is possible.”

But Jay is just one of the megawatt music names slated to perform at this year’s festival, which includes country superstar Carrie Underwood, alt-pop hitmakers fun., hip-hop’s greatest band the Roots, dance music veteran Tiësto and No Doubt, who will be making their first live appearance as a band following an extended hiatus from performing. “Global Citizen will be the first show No Doubt has played together in two years,” bassist/co-founder Tony Kanal tells Rolling Stone. “It’s a great way to get us back on stage. It was such an honor to be asked to play this particular concert. It’s unacceptable that over 1 billion people live in extreme poverty, and it’s got a pretty eclectic lineup, which reflects the event’s true spirit of diversity.”

“Global Poverty Project’s effort to end extreme poverty by 2030 is a cause I strongly support,” Tiësto tells Rolling Stone. “I am incredibly honored to be part of this year’s lineup for the the Global Citizen Festival in Central Park and to add my voice and the voices of my fans to those calling on the world’s leaders to throw their weight behind GPP’s efforts. It’s going to be an amazing show in one of the most unique venues in the world.”

“I love how this year’s lineup brings together the king of hip-hop and the king of EDM,” notes Global Poverty Project co-founder Hugh Evans. “Jay Z and his Shawn Carter Foundation have been with us on the whole journey, and No Doubt were so excited to do it from day one. We also felt like we needed to bring in some country for the first time: Carrie Underwood was the first country artist we reached out to, and she said yes. And personally, I’m such a huge fan of fun. and The Roots, too. The bill truly expresses that Global Citizen is a broad-based, non-partisan movement that crosses cultures and genders. We’ve always had an amazing diversity of artists each year, and 2014 continues that trend.”

As such, the upcoming festival builds on the template established in its previous incarnations of bringing together the most important musicians of the moment with an undeniable cause. The 2013 edition featured John Mayer, Stevie Wonder, Alicia Keys, Elvis Costello and Kings of Leon; likewise, the debut Global Citizen Festival in 2012 offered sets on the same stage from Neil Young and Crazy Horse, Foo Fighters, The Black Keys, Band of Horses, John Legend and K’naan. This year’s festival, meanwhile, will add media partners NBC and MSNBC, who will promote the event on flagships like The Today Show and broadcast it to an enormous audience worldwide. “By now, I think we’ve proved we’re not a fluke,” Evans says. “We’ve grown every year. It doesn’t get any easier, but the event does get bigger and bigger.”

That scale accentuates the mission of the Global Poverty Project, which was formed in 2008 to promote awareness and encourage action to end the worldwide scourge of extreme poverty. As in previous years, the festival has been timed to coincide with the United Nations General Assembly, using its high profile to bring the issue of poverty to leaders gathered there to discuss and implement social policy on an international scale. Global Poverty’s literature claims that, since it began the festival two years ago, advocacy demanded by its attendees have encouraged $1.3 billion in new funding, along with 35 commitments from world leaders, to combat world poverty. “We’ve found the power of this movement can create bigger, and more impressive, change,” Evans tells Rolling Stone.

For fun., who haven’t performed live in order to work on their new album, the opportunity was too good to decline. “We couldn’t pass up a chance to play Central Park for such a great cause,” band member Andrew Dost tells Rolling Stone. “Our manager has been pretty protective of our time lately because we’ve been working on a new album. But when he brought this to our attention, we were all excited about it.”

According to Evans, Global Citizen 2014 focuses on three key issues: bringing vaccines to the world’s poor (in particular, working with the Bill Gates-driven GAVI Alliance to raise funds to immunize 300 million children over a five-year period); bringing education to the nearly 60 million youth worldwide who are denied learning; and a new initiative highlighting the importance of adequate sanitation in stemming disease and other social problems.

“Sanitation is not a sexy issue, but we want to bring it to the forefront,” Evans tells Rolling Stone. “The world’s water crisis is always a focus, but you can’t address water without sanitation. And it goes beyond what you’d think: in India, two girls were tragically raped after they’d gone out at night to find a proper toilet to go to the bathroom in. In the wake of that incident, India’s prime minister Narendra Modi made a controversial speech where he said ‘India needs toilets, not temples.’ We’d love Prime Minister Modi to come up on stage at the Global Festival and announce a partnership with the World Bank to fund putting toilets in every house across India.”

The Global Citizen Festival doesn’t just aspire to engage world leaders, but also concertgoers. A key tradition of the event is its unique ticketing system: over 80 percent of the tickets are distributed free, earned by performing activist actions on the Global Citizen online platform. This aspect especially appealed to the members of No Doubt. “To get a ticket, you have to get involved in the cause – that’s amazing,” says Kanal. “Eliminating that barrier of entry is in the spirit of equality that’s at the heart of the whole event. What makes this particular concert special is that it’s not just about raising money, but awareness. That’s a different way of doing this kind of show: awareness is a different form of currency, and with this you can see it rise exponentially.”

In fact, the Global Poverty Project has grown its efforts using music as an awareness tool beyond the Global Festival. In association with Pearl Jam manager Kelly Curtis and Universal Music executive vice-president Michele Anthony, GPP has expanded its Global Citizen Tickets program to the U.K., Australia, and New Zealand, where artists like Beyoncé, Ed Sheeran and One Direction donate proceeds from two tickets from each of their concerts to poverty-ending concerns.

It’s also started Global Citizen Nights, where big names play local concerts across America to pressure local politicians on poverty-related issues. So far this year, The Fray and Aloe Blacc have performed such events in Austin, Texas and Chicago, Illinois. GPP is also harnessing the youth-reaching power of EDM with events like the recent Thank You Festival at Columbia and Maryland’s Merriweather Post Pavillion on June 26th, which featured an Electric Daisy Carnival-worthy lineup of Tiësto, Above & Beyond, Krewella and Cedric Gervais.

“EDM is hugely important,” says Evans. “It reaches real millennials – 15-, 17-, 19-year-olds – like nothing else. At the Thank You Festival, the head of the U.S. Agency for International Development, Dr. Rajiv Shah, got up onstage with Tiësto to announce a $2.9 billion realignment to save the lives of 500,000 children. That demonstrates the cause and effect we’ve seen the Global movement have on U.S. policy.”

For the artists, meanwhile, working with the Global Poverty Project’s mission renews ties to the socially conscious music that inspired them to become artists. “One of the first 45s my parents bought me when I was a child was ‘’We Are The World,’ which had a huge impact on my understanding of what artists could do to make a difference,” Aloe Blacc told the Chicago Sun-Times.

For No Doubt’s Kanal, meanwhile, the group’s participation with the Global Citizen Festival recalls the anti-racist foundation of the ska movement, with groups like the Specials releasing protest anthems like “Free Nelson Mandela.” “The Specials made people aware of apartheid, and also made an incredible piece of music,” Kanal says. “Bands like that lead by example, and in that spirit we’re playing Global Citizen. Not only do you get to have a good time playing and hearing music, but together we’re raising awareness of the plight of humanity. We’ve never been a political band, but we’re concerned about human-rights issues, and this was a win-win on all fronts. We just couldn’t say no.”