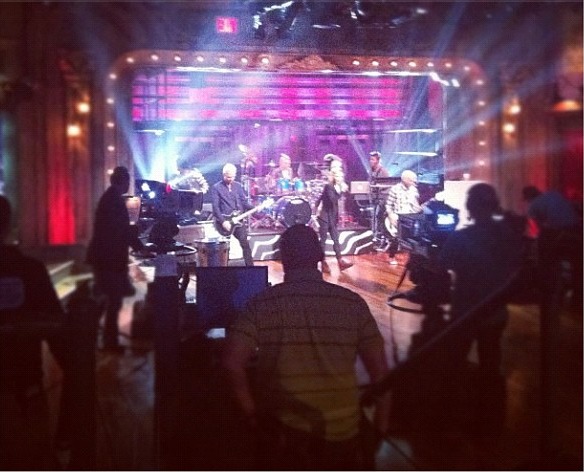 As everyone knows,No Doubt taped a performance tonight in NYC for Late Night with Jimmy Fallon-our own Amy was there,and reported that the band surprised the audience with a mini-concert,playing “Settle Down” twice, “It’s My Life”, “Underneath It All” and “Spiderwebs”;an amp busted at the end of “Spiderwebs”-ND must have really rocked the house!!! Remember,Late Night with Jimmy Fallon airs tonight at 12:35 AM EST on NBC;it’s thought that only the ”Settle Down” performance will air on TV,but hopefully at least one of the other performances will be uploaded to Late Night’s website. For those outside of the US,here is a livestream link for NBC. We look forward to the rest of Amy’s report from Fallon-Amy will also be among the lucky fans attending No Doubt’s Good Morning America performance tomorrow in Central Park;if you would like to share your stories, pics or videos from either show,we’d love to see them!

UPDATE: Thanks BoomBoxBattery from the official No Doubt forum for sharing his story of attending the taping!

No Doubt were INCREDIBLE!!! They did a mini concert, 4 songs!!!!!! “Settle Down” “It’s My Life” “Underneath It All” “Spiderwebs” The audience were going wild the whole time, lots of fans there representing. I assume “SD” will be the only performance broadcast on TV, so hopefully the other 3 will be online. I also am guessing this will be the same setlist for GMA tomorrow. SO MUCH FUN! 🙂 No interview. The guests before them were Bill Cosby and Fred Williard. Cosby was on for a long time so there probably wasn’t enough time to interview the band but Jimmy was really excited to have them on the show~ Also, the end of “Spiderwebs” was cut short because the amp blew out…it was hysterical! They performed “Settle Down” twice in a row because they weren’t sure which one to use to air on TV, depending on the camera angles and stuff. It sounded better than the TCA performance.

UPDATE: YAY,here’s the video of No Doubt’s AMAZING performance of ”Settle Down”!!!

4 thoughts on “No Doubt on Late Night with Jimmy Fallon Tonight!!”