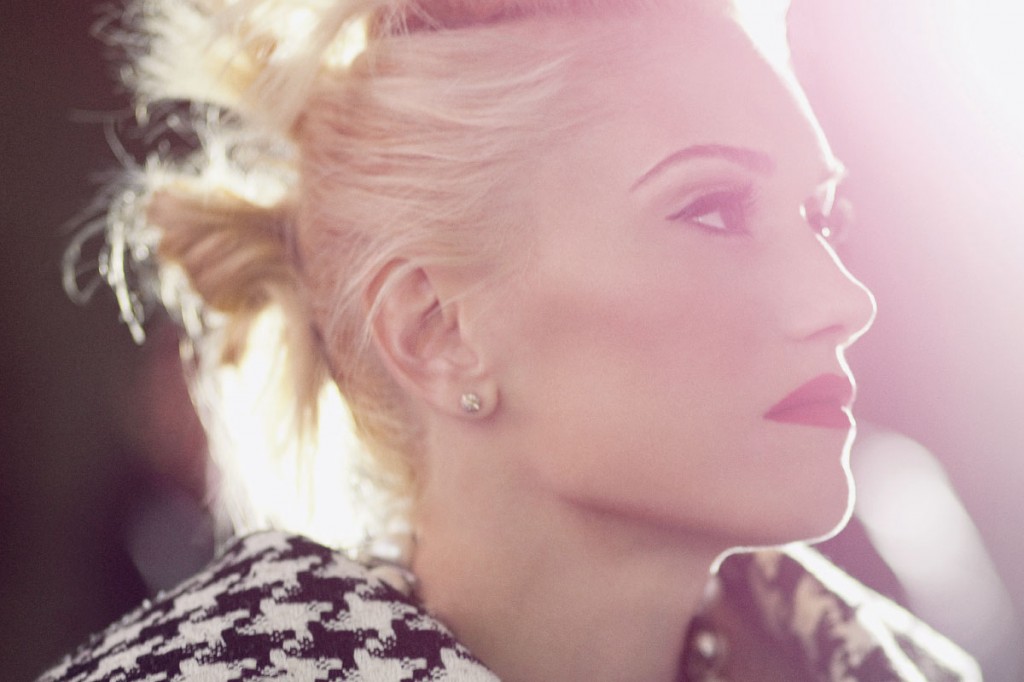 Gwen sat down with Elle for a new interview and talked about lots of things, including “The Voice”, Lingerie, what’s next for her regarding music and lots of other stuff.

There’s a reason Gwen Stefani has graced the covers of ELLE many times—she manages to do it all and still keep her cool, despite being one of the most famous women in the world. She just had another baby, but the No Doubt frontwoman isn’t slowing down, even for a minute. In fact, life these days for Stefani is B-A-N-A-N-A-S. The mother of three has just signed on as a judge for The Voice, along with Pharrell Williams, Blake Shelton, and Adam Levine. Plus, she’s got a new collaboration with Hanky Panky out this month, featuring some of the label’s best-selling styles in Stefani’s signature camo and rasta prints. And, of course, she’s got a music career of her own and her clothing labels to manage as well. We sat down to talk to her about lace and lingerie, all things Pharrell, and her return to New York Fashion Week.

You have a lot of projects going on, between the lingerie collaboration, a new baby, and now your role on The Voice. Is it true that you and co-host Adam Levine might be working on some new music together?

I just met Adam and we are talking about collaborating and getting into the next phase. I didn’t know I was going to be doing The Voice. I literally had the baby and then got a call and then suddenly, I was doing it. I didn’t really know what was next. Now, all of a sudden, I am doing The Voice, my son is going into kindergarten, and I am going to be working on some new music. It’s all very exciting.

Pharrell is also a co-host on the show. What’s it like working with him again?

I was freaked out. I know Pharrell as a producer and in a different role. I am a huge fan and when I am around him, I like don’t know how to describe it, my heart sort of flutters a little bit. I have known him for a long time and we have a lot of history together. He is so inspiring, talented, and humble and the list goes on. He is unbelievable really. Over the years, he has gotten even more deep and special because he has matured. As for Blake, I think I might be his number one fan. I don’t even know him though, I have only been on the set with them for like a week. The version you get of Blake and Adam on TV—I get the R-rated version. They are so funny and have such an amazing chemistry. It’s brand new and I am just getting my toes wet.

Where’s music going these days, do you think?

I think it’s an exciting time in music. It’s inspiring to be in the position of coach, which is something I have never done before. I am hearing a 15-year-old boy who had all these hits on YouTube saying that’s how he became famous—that’s not what we did. We asked our dad for $5, rented a mic and went to the garage. You can be nobody but become someone thanks to the Internet. I think that’s exciting.

What can we expect from your new music?

As for me, I don’t know what is happening next musically, but I know the way I am going to do it is different. I have already started on it. I feel inspired that I went onThe Voice and did “Hollaback Girl,” which is such an old song, and it went back on the charts the next day. It made me feel so happy and made me want to do new music.  It made me think that maybe people might want to hear it.

Getting back to fashion, I hear you reached out to Hanky Panky about working with them. What drew you to the brand?

Yes, after doing L.A.M.B for so long, there’s so many different categories I could do. Working with someone that already has that expertise is kind of a no-brainer. I am a big fan of the brand and that’s what I’ve worn before. I added my signature prints and things that represent me. They know what works and what doesn’t work.

What do you look for in lingerie?

I go through different phases. Right now, I am nursing so it’s about how can I get to these boobs the fastest. I am really just happy to be back into my Hanky Pankys again and to have my body back (it’s still a work in progress though). I had phases where I was really into neon and I was like, ‘If I’m going to wear this, it might as well be neon.’ But at the end of the day, it’s about comfort. If you feel uncomfortable it’s almost not worth it.

Will we ever see L.A.M.B return to New York Fashion Week?

Interesting you should ask, I am going to do some sort of presentation or show this September. The only reason I haven’t lately is because it falls when my kids go back to school and I was like, ‘Oh, I guess I will go to NYFW and miss my kid’s first day of kindergarten.’ No. This year it falls on a different week so I can be in both places.