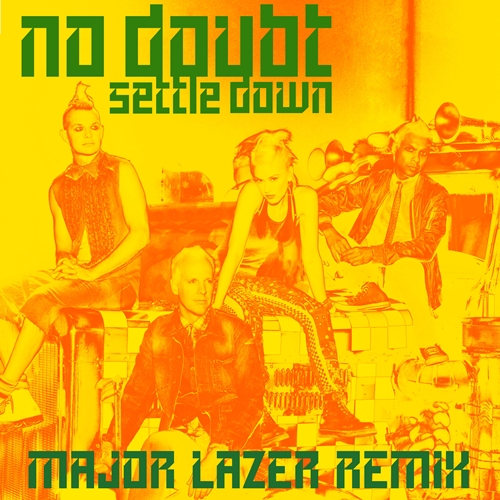 YAY,here’s the treat that the fans were promised for helping ”’Settle Down” advance to the next round of the Popdust Popoff!! No Doubt just tweeted and posted on the official site the full Major Lazer ”Settle Down” remix!! It sounds absolutely amazing! Thanks so much to the band for sharing-they have promised that even more ”Settle Down” remixes are coming soon!!

Did you hear that? It must be the brand new “Settle Down (Major Lazer Remix) that we’ve got for you right here, exclusively on NoDoubt.com. Click below to listen and expect to see more remixes of “Settle Down” coming soon!

No Doubt have released many remixes over the years, most famously Roger Sanchez’s remix of “Hella Good” which won a Grammy Award for Best Remixed Recording in 2003. Expect to see a lot more remixes from Push And Shove, including four more “Settle Down” remixes coming soon.
Post your favorite No Doubt remixes in the comments below!

Thanks to all the fans that helped No Doubt win Popdust.com’s “Pop Off” and advance to the next round. Hope this remix is a nice reward for all of your hard work! Click here to vote and get the band into the PopDust Hall of Fame!

No Doubt has now uploaded the remix to their official Youtube channel.

Cool! Major Lazer just tweeted a link to the remix on No Doubt’s Soundcloud page,mentioning that it and other Major Lazer/No Doubt collaborations will be available soon! (Diplo had mentioned in a recent interview that he was working on a remix for the ”Push and Shove” song.)

3 thoughts on “Major Lazer ”Settle Down” Remix at NoDoubt.com!!”