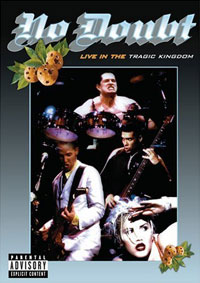 Bonus Material: Several extras and easter eggs were included on the 2006 DVD release of Live in the Tragic Kingdom, including a three-song video clip of a concert in Den Haag, Netherlands during the Tragic Kingdom Tour, an alternate version of “Don’t Speak”, a photo gallery, and trailers for No Doubt’s two previous DVD releases, The Videos 1992–2003 and Rock Steady Live.