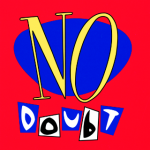 Interscope didn’t back a single for the album due to poor sales, but the band financed a video by themselves. The video got airplay in Orange County, byt did not chart. To this day, this is the only video to feature Eric Stefani as a band member (he does make a cameo in the video for Sunday Morning).