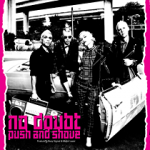 Push and Shove was released as a promotional single on  iTunes on August 29, 2012, with the song premiering on the Ryan Seacrest show. No Doubt stated that they were unsure whether the track would be a single, where it was then later confirmed that “Looking Hot” would be released as the second single from the album instead.