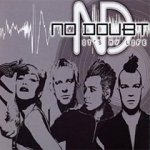 No Doubt decide to record a cover song to promote their greatest hits album, since Gwen was already in process of recording L.A.M.B and the band at that point was under a short hiatus, so writing a new song was not an option. The band listened to a lot of 80’s songs and narrowed down to Talk Talk’s It’s My Life and INXS’ Don’t Change. Unsure about recording a cover song, the band decided it might be better to write a new one, but after rehearsing the song with producr Nelle Hooper, the band decided go to with It’s My Life. The versions of the song were released as singles, the studio version and remix.