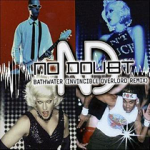 The remix was released to promote their greatest hits album, the song was remixed by Invencible Overload, Tom’s side project. The video for the song is an edit of the original video. This is the last single before No Doubt’s hiatus due to Gwen going solo.