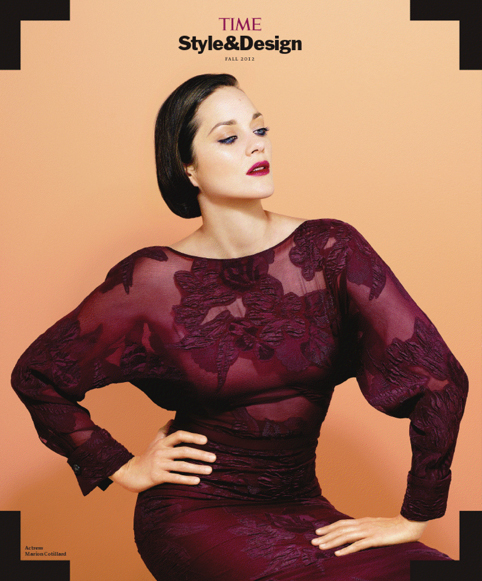 From My Fashion Life:

It’s exciting enough to learn that Time has just released the Fall 2012 issue of its biannual Time Style & Design, but imagine our delight when we discovered that Marion Cotillard was on the cover… and both she and Gwen Stefani were among the interviewees!

Marion Cotillard has had her fair share of mag covers recently (as has Gwen!), and this is another one for her to be proud of, don’t you think?

As Marion was the first celeb to wear new-season Dior Couture on the red carpet, it’s safe to say that she is regarded as quite a big fashion influence, so it was inevitable that she’d be asked to dish the dirt on her sartorial choices past and present.

“I love men’s hats, because my father wears them,” Marion said. I wore a lot of my father’s clothes as a kid, even though most of the time it was a disaster.”

And let’s not forget music and style goddess Gwen Stefani, who spoke out about songwriting and clothes designing.

“I’m more experienced with songwriting,” she said when asked which was easier. “Design is more of a fun hobby. There’s not as much pressure. It’s not emotional. It’s so fun and so indulgent. It’s all about what I want and what I can make.”

We can’t wait to get stuck into those interviews! Will you be getting the new Time Style & Design?

UPDATE: Looks like Time has posted the full 10 Questions with Gwen feature!

It’s been 11 years since No Doubt’s last studio album, Rock Steady. As you wrote and recorded together again, did things feel rusty?
It was definitely a rough start. I thought, “I might have overdone it. I have nothing left inside me except a baby growing.” Even after Zuma was born, I felt depleted and had no ideas. So we went on tour. Being able to sing the songs I’d already written—and seeing the fan support—made me relax and relieved the pressure.

Why the title Push and Shove?
It felt like that to make this record. The whole record talks about being overwhelmed and working hard to get the creativity going.

You and your husband Gavin Rossdale weren’t fans of each other’s music before dating. Who came around first?
We kind of both did at the same time because our label asked Gavin to take No Doubt on tour, and he said, “They’re not a good fit.” Until he saw the video for “Just a Girl”—then he decided to think about it. When we met, we were both like, “Uh-oh.” We ended up going on tour together.

Did you make the first move, or did he?
Oh my god, are you serious? He did! I’m not that kind of girl.

You recently said that you wear makeup to make Gavin like you more. Is natural beauty overrated?
Of course not! Personally, I’ve just always loved the theater, the glamour. I was an art major. But it’s not something that I take seriously. It’s unbelievable—you say something and you’re laughing, and then it’s quoted everywhere. It’s embarrassing.

Your 6-year-old son Kingston is photographed almost as often as you are for his style—the blue Mohawk, the biker jackets. Are those his choices?
When he was 3 and got his first Mohawk, that was me. But it was his fault. He stuck a slinky in his hair, and it got completely tangled, so we had to do something. I was about to go on tour, and we were all bleaching our hair and cutting it, so we did his. I cried for two weeks after, like, What did I do to his hair? But now there’s no room for your opinion. You can’t force them to do anything. Especially when they hit the superhero phase, which my 4-year-old is at now.

Kingston is named after the capital of Jamaica, which has influenced many parts of your life. Rock Steady was partly recorded there, and your fashion line L.A.M.B. is all about colorful, Rasta-chic pieces. Why are you drawn to it?
It started when I discovered the music as a teenager. The ska scene back then was all about unity, black and white coming together, and that was important to us. Orange County was multicultural, but not as much as it is now. We were babies trying to play a part and make a statement by copying the bands that we loved.

When you debuted L.A.M.B. in 2004, celebrity designers weren’t so ubiquitous. Did people make you feel like a poseur?
I worried that everyone from music would think I was only doing it to make more money. And then I worried I could never be accepted in the high-fashion world, because for me, it had been about thrift-store clothes, making your own thing, being unique. The expensive stuff wasn’t real, you couldn’t get your hands on it, only skinny models wore it—those were my thoughts as a little girl.

You did have a high-fashion designer, John Galliano, make your wedding dress, which is now on loan to London’s Victoria and Albert Museum. Have you talked to him since he was dismissed from Dior last year for anti-Semitic remarks?
No, I haven’t talked to him. I was never really friends with him. I wanted to be, but he was in Paris and really busy. I do remember rolling into a beautiful Christian Dior boutique to have a fitting with John, and I was so mad because I didn’t even have a new pair of underwear to put on.

What’s easier, writing songs or designing clothes?
I’m more experienced with songwriting. Design is more of a fun hobby. There’s not as much pressure. It’s not emotional. It’s so fun and so indulgent. It’s all about what I want and what I can make.