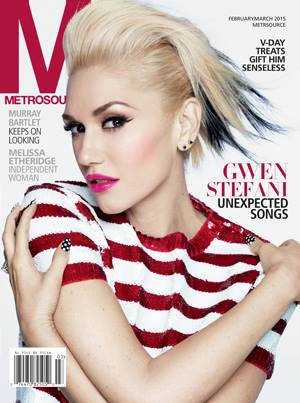 Gwen will grace the cover of the February/March issue of the Metrosource Magazine! The website shared the article, where she talks about some iconic songs from her carreer, as “Just a Girl”, “Baby Don’t Lie”, “Spark the Fire” and “Wind It Up”. Read it below.

After swearing off going solo, Gwen Stefani surprised fans by joining the coaching panel of The Voice and releasing tracks from a new solo album. Now, she talks to Metrosource about the happy accidents that helped change her mind.

Gwen Stefani’s life has been full of surprises lately. After two successful solo albums, she had reunited with No Doubt and had no intentions of doing another solo album anytime soon. But then life threw Gwen a few curveballs — including an unexpected pregnancy, a coaching gig on NBC’s hit The Voice and new opportunities to collaborate with Pharrell Williams (who helped pen Stefani’s massive hit “Hollaback Girl”). Suddenly, a third solo album went from impossible to inevitable. We spoke to the world’s busiest blonde as she wrapped up her debut season on The Voice with an explosive performance of the track “Spark the Fire” and continued to craft her forthcoming album.

“I’m excited. I love talking about myself,“ Stefani jokes as we dive into a conversation that touches on everything from her constantly evolving creative process to the tribulations of making eye-popping music videos.

JUST A GIRL
It’s hard to believe, looking at the eternally youthful Stefani, but she started recording with No Doubt in the mid-1980s. Those who know the band from massive hits like “Don’t Speak” (which spent 16 weeks at number 1 on the Billboard charts) may not realize that the band’s breakthrough album Tragic Kingdom was actually their third.
From the beginning, Stefani was a study in contradictions that captured the public’s imagination. Her flawless platinum locks, often swept up in a way that recalled 1940s glamour, might not have seemed a natural match with her cutting-edge fashions and hanging-with-the-boys attitude. Yet somehow, on Stefani, it all worked.
So it was no surprise when in 2004 she embarked on a solo career, releasing Love. Angel. Music. Baby. What was surprising: Stefani turned out to have even more unique tricks up her fashionable sleeve. Much of the music on L.A.M.B. and its follow-up The Sweet Escape hearkened back to some of the best pop of the ‘80s — helping to usher in a major retro revival. Other aspects of the projects were wildly forward-thinking — incorporating contemporary Japanese culture (notably in the form of her “Harajuku Girl” dancers) and adding phrases like “hollaback girl” to the popular lexicon.
In 2011, No Doubt reunited to write, record and perform in support of their sixth album Push and Shove, and Stefani gave every indication that she would make music exclusively with the band moving forward. At least that was the plan.

BABY DON’T LIE
“This was never intended to happen,” Stefani says of the as-yet-untitled solo album. But once she’d been asked to do The Voice, she knew she wanted to release new music while she was on the show, and she knew there was no way another No Doubt album could materialize in that time.
“Our last record took three years to make,” Stefani explains — blaming some of that slowness on her own busy schedule balancing work with her fashion line L.A.M.B. and family obligations (Stefani is married to British musician Gavin Rossdale and the mother of three boys).
So she had to find another way to make music. “It’s so weird, the creative process; especially these days, after having done so many things in different ways,” says Stefani, who tends to use the word weird with a giddy frequency that is both adorable and hilarious.
Stefani tells me that the album “started with visuals.” She describes putting together “mood boards” of colors, inspirations and “vibes” — hoping to both reconnect with her last solo period but also move forward.
Next, Stefani headed into the studio. From early on, the focus of the album was collaboration. “It’s all working with talented people,” she explains. “It’s basically a record for talented writers, and me trying to piggyback on top of them.”Some songs evolved from a process of emailing tracks back and forth with her collaborator — which she describes, with a laugh, as “so weird!”
Though she can’t yet reveal all the people she’s worked with on the album so far, Stefani says that their time working together as coaches on The Voice made her particularly excited to get back into the studio with Pharrell.“I think being together all the time, being around all the music, doing something I had never done before,” she says, “It’s very inspiring.”
She recalls saying to Pharrell of the first two tracks they worked on, “Whoa, dude, you’re going to go there? These songs are kooky!” The following morning he surprised her with the beat to what would eventually become the album’s second single, “Spark the Fire,” and, “I was like, That’s it!” she says.

GET OFF MY CLOUD
The video for the album’s first single, “Baby Don’t Lie” features Stefani traveling through a colorful, computer-animated wonderland. But, she says, the process of making that kind of green-screen magic is far less colorful than the result. “It was so boring. All I did was walk on a treadmill,” she says, sounding like a kid who can’t go out to play on a rainy day. She recalls repeatedly asking, “Are you sure there’s enough going on?” at the time, but ultimately was pleased with the result. “They kind of took this blank green page and made this whole world around it.”
Fortunately, while the process was going on, Stefani was also getting inspired about the visuals for “Spark the Fire.” “Oh my God! I know what I need to do!” she remembers thinking. “We’re going to have emojis coming out of my mouth, and I’m going to do this and I’m going to wear that and I’m going to have a cloud outfit!”
And though much of the visual pyrotechnics of the “Spark the Fire” video were also layered on with computers after filming, Stefani had a chance to experience the live equivalent when she premiered it on The Voice. “When I was on the Voice set, the people there are just so incredible and I was like, “Okay … can I have a cloud? And can I have this? And can I have that? It was: Check! Check! Check! Everything I wanted, they made happen. It was the weirdest experience. Usually there’s a lot of pushback and budgets,” she says of the performance (during which she did, in fact, ride in on a giant, smiling cloud).
She also notes that she was a bit sad to see that process end. “It’s almost like Christmas for the kid, where there’s such a buildup and then it’s the day, and they have all the toys — they don’t know what to [do]!”

WIND IT UP
In the meantime, Stefani, continues to work on finishing the album. “First I thought I was done, and now I’m kind of like, Hmm, I think I want to write a few more,” she says. “I was going to try to get it out before Christmas, and then thought, Why am I rushing it?”
Is there anything in particular we can look forward to? “I just did a new song with Pharrell a couple of days ago; that’s really cool,” she says. “And there’s another one that I’m working on with — I can’t say who!”
Before we say our goodbyes, I mention to Stefani that it seems many of her fans — particularly her gay fans — worship her style with a fervor once reserved for the screen sirens of Old Hollywood. We laugh over the fact that she actually has played an Old Hollywood screen siren — Jean Harlow in The Aviator. “How weird is that?” she says, before she gets serious. “I feel really blessed to have anybody still looking my way,” she says. Stefani confesses that she was convinced, from very early on, that there would come a day when the public’s appetite for her would fade — it even helped motivate her to start her fashion line as a fallback career. “I know that they’re not going to still like me,” she says with what seems to be genuine humility. “You know what I mean? There’s no way. The high can never last.”
As for the idea of being worshipped like a screen siren, Stefani says: “In my world, my gay friends that I know — people that are in my life — are the most sort of creative, exceptional human beings and they’re special,” she says. “They’re part of my creative team and people that I really count on, so it means a lot to me. Thank you very much.”