Thanks to Bec from No Doubt Australia for the heads up,Gwen is on the cover of Australia’s Sunday Magazine that is included in today’s editions of The Herald Sun and The Daily Telegraph. The magazine features a new interview with Gwen on being a parent and a popstar;the cover photo is from Gwen’s US ELLE shoot last year. Hope you Aussie fans can get a copy! 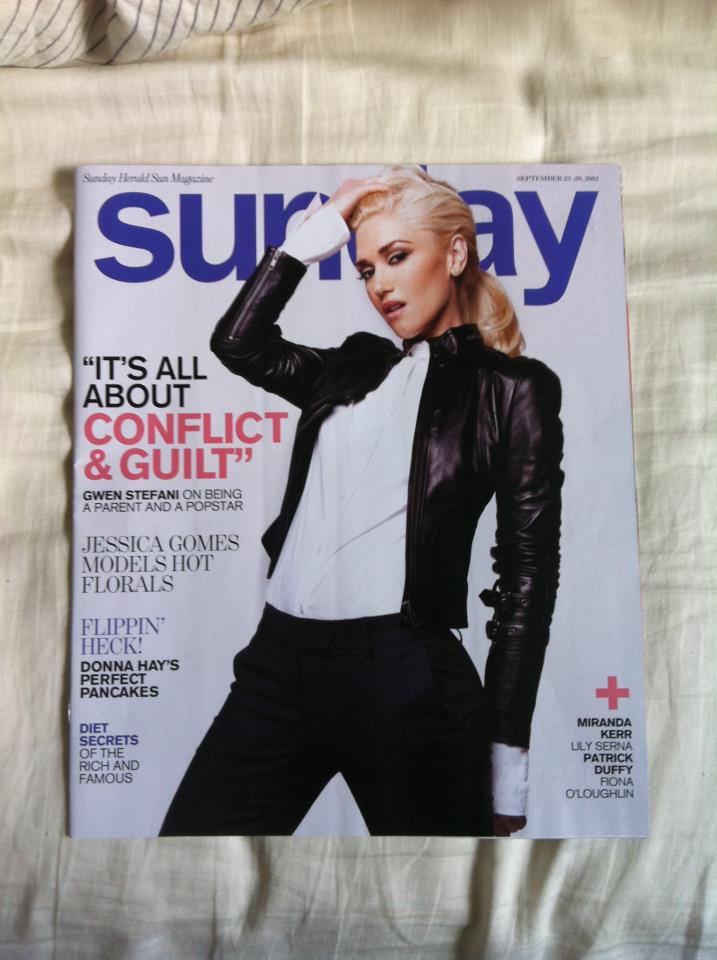 UPDATE: Here is the article:

AFTER 11 years, a wedding, two kids and two solo albums, Gwen Stefani is reuniting with her band.

Gwen Stefani surveys the scene at LA’s Ocean Studios, where No Doubt, the band she’s fronted since she was 17, recorded its latest album, and turns up her nose. “It smells as if cats have been living here.”

Decked out in the street-wise haute couture she does so well (checked pants, vertiginous heels and black leather jacket), Stefani is looking as cool as ever, and yet she’s fidgety, nervous even. She’s joined by bandmates Tony Kanal, Tom Dumont and Adrian Young, the same “dudes” (as she refers to them) she’s known since she was a teenager growing up in Anaheim, California, and with whom she has since sold about 25 million albums.

Some 25 years after their first gig, the quartet still look like the goofy, cartoonish, ska-punks that burst out of the Southern California punk scene in the late ’80s, although their op-shop clothes have been replaced by designer duds, and the laugh lines have become a bit deeper.

The band are here to play their new album, their first since 2001’s Rock Steady, for a group of journalists and they all seem anxious.

An engineer hits ‘play’ and Push and Shove thumps through the speakers. It’s classic No Doubt; the songs jaunty, the ska roots more pronounced than they have been in years and Stefani’s throaty vocals out in full force. It’s nice to hear them back. Stefani looks at those assembled and mouths the words, “Do you like it?” Getting the thumbs up, she actually looks relieved.

Surely, after all of these years, a bunch of journalists can’t make one of the world’s biggest bands nervous?

“Really, I’m scared,” cackles Stefani, when we meet the following day in another LA photo studio. “It’s difficult to know what people like any more. And it’s such a transition from being at home with the kids.”

Chugging down a decaf soy latte, Stefani is tired, having been up early with her two sons, Kingston, 6, and Zuma, 4. “It’s not like the old days,” she smiles.

But she isn’t your usual celebrity. There’s no pretence; she’s candid and still very much the California girl who grew up in Orange County (her speech is peppered with “dudes” and “supers”) obsessed with British bands such as Madness.

Push and Shove is one of the most anticipated albums of the year for fans and peers alike (even Lady Gaga tweeted she was “excited” about its impending release). Stefani, however, needed convincing to take the mike again. After all, a new breed of popstar had emerged in her musical absence – Lady Gaga, Rihanna and Katy Perry had all become global superstars.

The 42-year-old admits she wondered if she was still relevant. No Doubt hadn’t put out an album since 2001, and although her subsequent solo efforts, Love. Angel. Music. Baby (which sold seven million copies globally) and its follow-up The Sweet Escape, had been hugely successful in their own right, it had been six years since her last musical offering. Her solo albums had inspired her. No Doubt, she says, had grown stale, with their music, with travelling, with each other.

And for Stefani, life had taken over. She’d married British musician Gavin Rossdale and become a mum. She’d also shifted her focus to her burgeoning fashion empire – the mega-successful labels L.A.M.B, Harajuku Lovers and Harajuku Mini (for kids). She’s been sewing since she was a kid and used to make all of the band’s early outfits, and found fashion gave her a different outlet to music that she found infinitely less taxing.

“Ultimately, music is more emotional, because it documents a time in your life and you put everything into it. With fashion, it’s the creative process of being excited and having an idea – the process of making something – that I really enjoy. At the end of the day, I don’t care about the clothes as much as I do about making them. For me, it’s so much easier. You’re just making stuff for yourself and your closet.”

Music was definitely on the backburner until her bandmates (who’d all subsequently had families of their own) came calling. They were ready to go. She wasn’t. At the time, she was pregnant with Zuma.

“I felt horrible, because that’s a long time – when you’re pregnant – to say, ‘I don’t want to work,’” she says. “But I couldn’t; I was sick every day, I was huge and I had a toddler running around.”

After Zuma’s birth, Stefani was keen to work, but it was a slow process. “It was like, OK, he’s out! Let’s do it! And then… nothing.” The band found they couldn’t write songs, that nothing worked.

Instead, they went out on tour, playing old favourites, getting their fans – and themselves – interested again. “That was a good way for me to get my body back in shape and feel good,” she says. “And just
to feel relevant again, because when you’re in mom mode, you think, how am I going to make a modern record?”

From the outside, Stefani may appear to be a gorgeous popstar with an extraordinary lifestyle (she and her brood have play dates with the Jolie-Pitts), but she’s always been upfront about her struggles with body image.

“I was chubby when I was a child and I have all the issues everyone else has,” she says. “I’m like every other girl; I’m vain and I want to wear cute clothes. But, over the years, I’ve learnt it’s a waste of time to worry about it so much.”

Her personal life has had its share of up and downs, too. Her first love, fellow band member Kanal, broke her heart after a seven-year relationship, just as No Doubt were enjoying major success (on the bright side, the pair’s split spawned the band’s mega-hit ‘Don’t Speak’, which propelled them to stardom).

“How did we last through that?” she says. “It was because we were always friends more than anything else. I was lucky that, although my heart was broken, I met my husband one year later and it was sort of like, bang, bang, and I fell madly in love.”

Stefani met Rossdale in 1995, when No Doubt toured with his band, Bush, and they married in 2002. A decade must be worth triple that in Hollywood years, surely?

Stefani laughs. “We have our ups and downs. There are moments when I’m madly in love with him and other times I’m not. But the difference is now we have kids and we’re prepared to make it work.”

Is it difficult juggling young children and demanding careers that take her and Rossdale all over the place?

“I don’t think there’s any way to make it work with kids. Someone is always suffering,” she says. “Even today, my son is at the beach with the nanny, and I’m thinking about him the whole time. I’d rather be watching his chunky little legs running around in the sand. It’s conflict and it’s guilt and it’s super-hard. Somehow you figure it out, but it’s ever-changing.”

Reflecting on the band’s early days, she says, “We were broke, we were excited, everything was new.” But times, she agrees, have changed. Fame, age and wealth will do that.

“It’s a different time in my life and it’s OK, because now I don’t want to go on tour for two years. Everything would hurt too much. It’s fun doing things until you’re done with them, and then you’re done with them. When I finished my solo tour, I felt ready for No Doubt. I was done with having the baby, and I was ready to go on tour. You just know when it’s time for some things to end and other things to begin again.”

— Push and Shove (Universal) is out now.