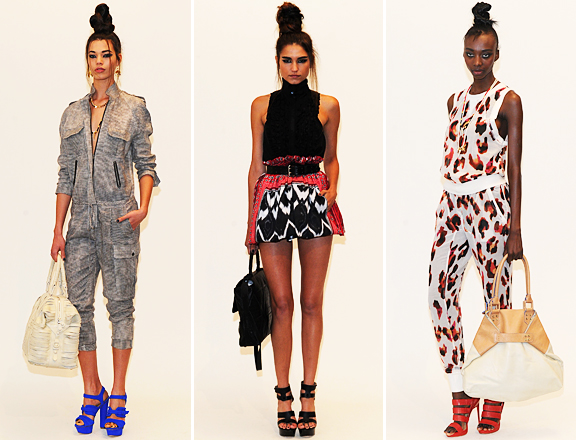 Incredibly long lines weaved through the Lincoln Center filled with die-hard Gwen Stefani fans (we were one of them, obvs) patiently awaiting a glimpse at her spring 2012 L.A.M.B. collection. When we finally made it inside, we were greeted with around 15 looks that reminded us of Gwen’s signature style—lots of loud prints, comfy jumpsuits, and super short minis (but sadly Ms. Stefani herself wasn’t there). Gwen is literally the QUEEN of making one-piece ensembles look fabulous, so it’s no surprise she created a few springy streetwear-inspired options for the coming season. She plastered cargo pockets on the front and sides of a pair of drop crotch printed jumpsuits giving them a chic military vibe. She finished the look with a few gold chains and KILLER platform shoes (don’t worry, we’ll get to those bad boys later!). Gwen also used a bold black and white tribal print throughout a few of her pieces—a flouncy mini skirt (seen above), a collared shift dress, and a one-shouldered maxi dress (with zipper detail around the arm openings!). And as, um, self-declared leopard print addicts, we immediately fell in love with her fiery print tank and matching harem pants ensemble. We can’t think of anywhere we WOULDN’T wear this outfit. MEOW.

*GASP* The shoes! Gwen is known for always making to-die-for kicks, and this season was no different! We saw tons of strappy platforms and wedges we’d want to get our paws on. Our favorite pair HAS to be the cerulean blue buckled platforms that instantly add edge to any ensemble, but we can’t ignore the strappy black wedges that would go with literally everything in our wardrobe. Also, peep the top photo for a glance at her fierce red stilettos. Gimme.

And, of course, the most OBVIOUS part of these looks was that uh-mazing sky-high hair! We loved this particular model’s ‘do that mixed both blonde and black strands, but kept a few pieces free for a decidedly softer look. The darkened eyebrows and dramatic cat eye are nothing new for Gwen, in fact, we’ve seen almost this EXACT beauty look before on Ms. Stefani herself! The jewelry was filled with thick, gold statement necklaces with a tribal feel and tons of bangles that we’d stack on each arm.

YET another sensational review from FashionEtc–we are SO thrilled for Gwen receiving such high praise for her collection!!

Theme: The Rat Pack, graphics, and the Maharaja

Accessories: Bags by Artisan House, shoes by Titan, and jewelry by Noir for L.A.M.B.

The big question regarding this season’s L.A.M.B. presentation was whether people would attend. It was previously reported that designer Gwen Stefani would likely be a no-show—she’s finishing up her latest record with No Doubt, so one had to wonder if the clothes would be enough of a draw. The answer: a resounding yes. The venue (the studio at Lincoln Center) was over capacity 20 minutes into the showing.

With two lines of editors, writers, fans and more flocking to see the collection, it was a chaotic scene. But after a solid 35-minute wait, the crowd pushed forward and we entered into the room. Panic inducing? Yes. But let’s talk about the clothes shall we?

Stefani is strongest when she designs for herself. The star’s style is notable, fun, and a look many a girl has emulated. And the Spring 2012 collection is very much in that vein. Printed jumpsuits (with a loose, forgiving fit and tapered, cropped leg) paired with bright, chunky heels could have easily walked off the set of one of her music videos.

A ruffled tuxedo shirt offered up a more demure take when paired with pants in the same print as the aforementioned one-piece, while an animal-print combo (matching top and pants) was fun and looked like something straight out of the designer’s own closet. In fact, the strongest pieces were those that screamed Stefani. Even the loose fitting green trousers were very much on par with her personal style.

Guess we didn’t miss Gwen after all—she was definitely there in spirit.

Here’s another review from USA Today:

Celeb designer Gwen Stefani may have been absent from the L.A.M.B. presentation, but her influence was all around. USA TODAY’s Arienne Thompson scoped out the line, which was shown in a club-like atmosphere complete with dark lighting, loud music and beautiful people.

Stefani’s inspiration for the collection was three-fold: India (gilded), the Rat Pack (black and white) and electric pop (brights). This bibbed dress is part of the Rat Pack segement, and is paired with blue suede heels.

This babydoll tunic is part of the Indian-inspired segment of the line. The impressively tall topknot is not surprising coming from Stefani, who loves to try creative hairstyles in her own life.

Leopard print gets the Stefani touch with a tinge of coral. Think this will fly at the office with a blazer on top? We sure hope so.

Gwen Stefani’s L.A.M.B. show normally shuts the curtain on Fashion Week in a packed to the rafters spectacular, where onlookers are inevitably treated to sightings of the pop star-turned-designer’s adorable sons, Kingston and Zuma.

This season, neither Stefani nor her darling progeny made an appearance, and the label opted for a more staid presentation dedicated to “The People of New York City on the 10th Anniversary of 9/11.” But it was still a big draw with editors and the usual crowd, who flooded the small space to see the collection, which was again, a mirror of the singer’s own wardrobe. All of her sartorial moods were covered in the myriad of boyish plaid separates, tribal printed maxidresses, cropped slouchy trousers in neutrals and jewel tones and sexy but slouchy pantsuits.

From PurseBlog-they have some fantastic photos,too!
Just because Gwen Stefani was missing from the LAMB Spring 2012 presentation at Mercedes-Benz Fashion Week New York (she’s a musician first, after all) didn’t meant that her stylistic influence wasn’t felt heavily. The colors and patterns that ran through the collection all felt like something she would wear, and perhaps more importantly, they felt like something a lot of girls will want to wear.

The striped brights were the clear standout for me, with the other bold patterns playing a close second. LAMB tends to do well when it goes bold, and the prints mixed with several very sharp leather biker jackets were all I needed to see to be convinced. These are fun casual clothes for young women, which is what Gwen and her team do best. A full gallery, after the jump.

Another glowing review from Style.com:

Gwen Stefani stayed in L.A. for this season’s L.A.M.B. presentation, but over e-mail the day before the show she shared the three central themes in Spring’s outing: Rat Pack, high voltage, and maharaja. And while the designer may have been absent, her personal style is never far from where the collection lands, so there was a healthy dose of Stefani, style darling, in the mix as well.

A menswear element came through in slouchy jumpsuits; cropped, wide-leg trousers; and a dandy suit in hypnotic black and white. It was more California cool than Rat Pack crisp, but there were a few quilted motorcycle jackets that had plenty of retro élan.

Oversize bags and towering platforms provided the color jolt. A one-shoulder to-the-floor caftan in graphic black and white ikat was exactly the thing you’d like to be caught in by the paparazzi—modern, sexy, relaxed, and yes, a little maharaja. Stefani is happy to admit that L.A.M.B. is a direct reflection of her personal taste—her “dream closet,” she said over e-mail. Luckily for fans—and her—it’s a closet that plenty of girls still want to shop.

In past seasons, it may have been fair to question whether the throngs of people who turn up vying for a seat, or even a tiny corner to stand in at the L.A.M.B. runway show were truly there to view the collection, or simply fans of its rockstar-turned designer owner Gwen Stefani and the many celebrities her work attracts. But for Spring 2012 that question was put to rest. Stefani toned down the production to a modest presentation instead of a splashy runway affair, and made it known well in advance that she herself would be unable to attend. Still what felt like thousands of people showed up wanting to cram themselves into the tiny Box space at Lincoln Center, making it clear: Everyone loves L.A.M.B.

This devotion to the label is not unwarranted. There is plenty to love about the Spring 2012 collection. Primarily black and white with a sharp graphic appeal, the looks were easily wearable, and full of the Stefani spirit; a little bit sweet and a little bit punk rock all at the same time.

Occasional nods to L.A.M.B. past season collections such as Caribbean-inspired prints, super short circle skirts really spoke to Stefani’s background as a ‘normal’ girl growing up in Southern California. These pieces are meant to work with the L.A.M.B. fans already have hanging in their closets. This is not a debutante minded label that wants you to buy it one season and never wear it again. L.A.M.B. is all about that ‘normal’ girl who buys a great piece and makes it work in her own way for years to come. This economy, not necessarily in fabrication as the materials and production were all of the highest caliber, but in spirit, as it pertains to the regular girl Stefani still is at heart, is one of the most endearing aspects of the label.

L.A.M.B., Gwen Stefani’s label, always draws a big crowd for its shows. But instead of the usual runway show, the label opted for a presentation this season in the Box, the small space at the Lincoln Center tents. The crowds were still there, but this time everyone had the same vantage point of the clothes, whether they were using their iPhones or a Canon SLR.

The looks: L.A.M.B.’s signature look is the flirty tomboy, which this season translated into checkered workman jumpsuits, zip jackets and shorts. The girliness factor was played up with over-the-top filigree necklaces that covered some of the models’ décolletage, heavy slashes of black eye makeup and hair that was twisted into a top knot.

The accessories: Purses in pale neutrals and primary colors sported loose basket-weave strips of leather. Platform sandal heels were sky high, and in natural hues, as well as electric reds and blues.

The surprise sweet moment: Someone’s little girl, who looked about three years old, was so smitten with a model that she begged her mother to take a photo with her. She did, setting off a wave of “Awwwws.”

The color palette: Bone, white and black dominated the collection or were featured in prints. Gold, red and blue stepped in as accents.

Last, but not least, check out one of our favorites: StyleWylde.com to see what they thought of L.A.M.B. Spring 2012!

1 thought on “Rave Review of L.A.M.B by MTV Style”