Thanks to Jonathan for sharing with us scans of a Gwen interview from a September 7,2005 U newspaper supplement in which she talks about the inspiration behind her Spring 2006 L.A.M.B. collection,which debuted on the runway during NY Fashion Week on September 16 of that year. We posted a transcripton of the article below. 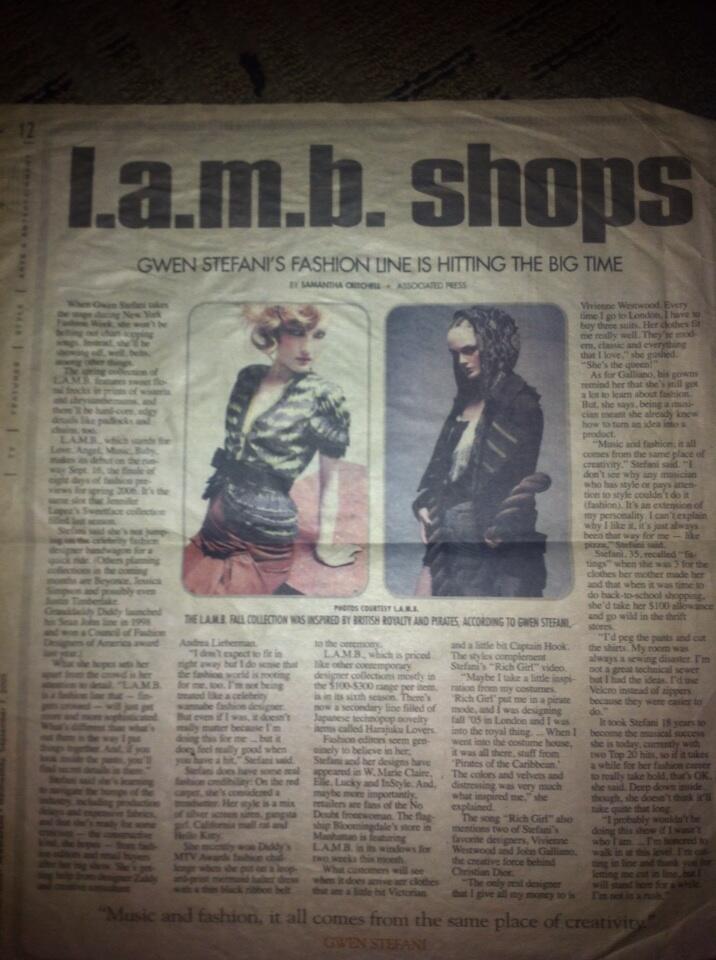 When Gwen Stefani takes the stage during New York Fashion Week, she won’t be belting out chart-topping songs. Instead, she’ll be showing off, well, belts, among other things.

The spring collection of L.A.M.B. features sweet floral frocks in prints of wisteria and chrysanthemums, and there’ll be hard-core, edgy details like padlocks and chains, too.

Stefani says she’s not jumping on the celebrity fashion designer bandwagon for a quick ride. (Others planning collections in the coming months are Beyonce, Jessica Simpson and possibly even Justin Timberlake. Granddaddy Diddy launched his Sean John line in 1998 and won a Council of Fashion Designers of America award last year.)

What she hopes sets her apart from the crowd is her attention to detail. “L.A.M.B. is a fashion line that – fingers crossed – will just get more and more sophisticated. What’s different than what’s out there is the way I put things together. And, if you look inside the pants, you’ll find secret details in there.”

Stefani says she’s learning to navigate the bumps of the industry, including production delays and expensive fabrics, and that she’s ready for some criticism – the constructive kind, she hopes – from fashion editors and retail buyers after her big show. She’s getting help from designer Zaldy and creative consultant Andrea Lieberman.

“I don’t expect to fit in right away but I do sense that the fashion world is rooting for me, too. I’m not being treated like a celebrity wannabe fashion designer. But even if I was, it doesn’t really matter because I’m doing this for me … but it does feel really good when you have a hit,” Stefani says during a recent interview.

Stefani does have some real fashion credibility: On the red carpet, she’s considered a trendsetter. Her style is a mix of silver screen siren, gangsta girl, California mall rat and Hello Kitty.

She recently won Diddy’s MTV Awards fashion challenge when she put on a leopard-print mermaid halter dress with a thin black ribbon belt to the ceremony.

L.A.M.B., which is priced like other contemporary designer collections mostly in the $100-$300 range, is in its sixth season. There’s now a secondary line filled of Japanese technopop novelty items called Harajuku Lovers.

Fashion editors seem to genuinely believe in her; Stefani and her designs have appeared in W, Marie Claire, Elle, Lucky and InStyle. And, maybe more importantly, retailers are fans of the No Doubt frontwoman. The flagship Bloomingdale’s store in Manhattan is featuring L.A.M.B. in its windows for two weeks in September.

What customers will see when it does arrive are clothes that are a little bit Victorian and a little bit Captain Hook. The styles complement Stefani’s “Rich Girl” video.

“Maybe I take a little inspiration from my costumes. ‘Rich Girl’ put me in a pirate mode, and I was designing fall ’05 in London and I was into the royal thing. … When I went into the costume house, it was all there, stuff from ‘Pirates of the Caribbean.’ The colors and velvets and distressing was very much what inspired me,” she explains.

“The only real designer that I give all my money to is Vivienne Westwood. Every time I go to London, I have to buy three suits. Her clothes fit me really well. They’re modern, classic and everything that I love,” she gushes. “She’s the queen!”

As for Galliano, his gowns remind her that she’s still got a lot to learn about fashion. But, she says, being a musician meant she already knew how to turn an idea into a product.

“Music and fashion, it all comes from the same place of creativity,” Stefani says. “I don’t see why any musician who has style or pays attention to style couldn’t do it (fashion). It’s an extension of my personality. I can’t explain why I like it, it’s just always been that way for me – like pizza,” Stefani says.

Stefani, 35, recalls “fittings” when she was 3 for the clothes her mother made her and that when it was time to do back-to-school shopping, she’d take her $100 allowance and go wild in the thrift stores.

“I’d peg the pants and cut the shirts. My room was always a sewing disaster. I’m not a great technical sewer but I had the ideas. I’d use Velcro instead of zippers because they were easier to do.”

It took Stefani 18 years to become the musical success she is today, currently with two Top 20 hits, so if it takes a while for her fashion career to really take hold, that’s OK, she says. Deep down inside, though, she doesn’t think it’ll take quite that long.

“I probably wouldn’t be doing this show if I wasn’t who I am. … I’m honored to walk in at this level. I’m cutting in line and thank you for letting me cut in line, but I will stand here for a while. I’m not in a rush.”