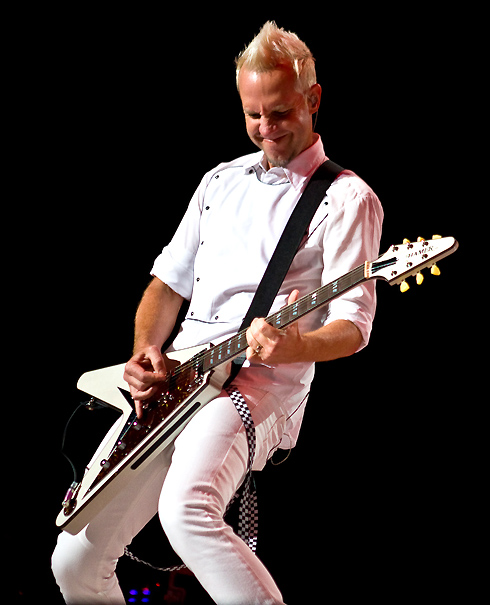 Tom tweeted a link to his cool new interview with GrindTV!

There should be No Doubt that you’ve heard of him–he plays guitar in one of the world’s most notoriously famous, female fronted, punk-rock-ska bands; he is a husband, a father of three, and when he has the time, he likes to indulge in some surfing and standup paddling. (That is, if his kids don’t have a game.)

We got a chance to speak with Tom about the recent drop of No Doubt’s newest album, “Push and Shove.” Here is what the modest kid-from-Anaheim/rock-star/family-man/waterman had to say:

What have you been doing with yourself?

I’ve been working mostly on the new No Doubt album, “Push And Shove,” these past few years. Right now the band is traveling in Europe, performing the new songs and promoting the album. As a side project, I’ve been co-designing a new guitar model with Grover Jackson, who builds his custom line of “GJ2Guitars” in his shop in Laguna Beach, California.

Was it hard to get back as a group and start jamming after a break of 11 years in the studio with your No Doubt comrades?

Even though it has been 11 years between studio albums for No Doubt, the actual break lasted about three years; we still toured and wrote and recorded songs for many of those years. I also got married and started having kids over the course of those years.

In addition I produced two albums for Matt Costa, and composed the film soundtrack for the documentary “The Providence Effect.”

What are your favorite songs or moments of creating the album “Push And Shove”?

We worked really hard on this album, and there were many days where we had these little breakthroughs. … The album is a menagerie of those little magical moments that happened over the course of the three years it took to make.

Major Lazer/Diplo also contributed to this album, correct? What was that collaboration like? And how did it affect the sound of the album?

Major Lazer came to us with an amazing intro of a track that would eventually become “Push And Shove.” They had gone down to Jamaica and recorded these great verses with Busy Signal, and we wrote the choruses and bridge. Gwen (Stefani) had to figure out how to relate her life to Busy’s lyrics and indeed they found some common ground. This song is like a roller coaster and has probably the most old-school ska beat that we’ve ever recorded, contrasted with these epic dub-step inspired choruses.

Will there be a full-blown tour?

Yes. We all feel most at home as a band and on stage and can’t wait to hit the road again. We’re hoping to be out there next year–gotta figure out how to balance that and letting our kids finish the school year!

How do you usually like to spend your free time as far as extra activities go?

These days my time away from the band is primarily spent trying to be a good dad. I have three boys so it’s lots of playing imaginary super heroes, playing soccer with them, and swimming–and now a little surfing and SUP boarding. I’m a waterman at heart, so that’s the focus of my non-music time.

Breakfast with my family, a day at the beach with my boys, and playing music with my No Doubt band-mates at night. I’m planning to have at least six of those days coming up in November and December when No Doubt plays shows at the Gibson Amphitheatre in Los Angeles!

I’d love to just keep on doing what I get to do now–hang with my wife and kids, surf and sail more, plus of course play music with my friends Tony, Adrian, and Gwen in No Doubt from time to time. I also have some philanthropic projects in mind, and I plan to spend more time volunteering in the coming years.

Thank you so much for taking the time Tom, looking forward to seeing you guys live again!