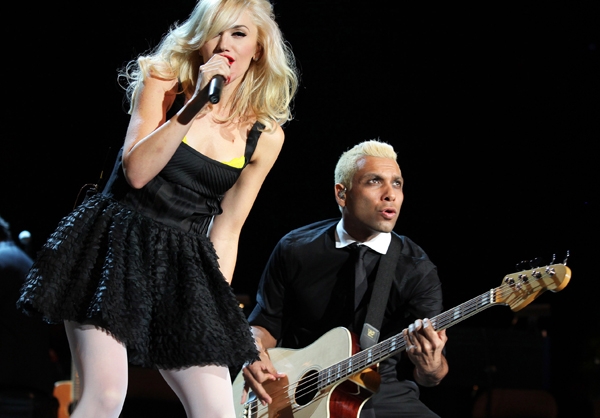 Tony sat down with Rolling Stone to yet another interview, in which he discusses the album making and gives us a little more details on “Undercover”, “Looking Hot”, “Heaven” and “Undone”. Check it out!

No Doubt’s Tony Kanal on New Album: ‘We Always Knew It Was Going to Happen’

Most albums aren’t recorded overnight; just ask Steely Dan or Bruce Springsteen. However, No Doubt‘s upcoming Push and Shove, out September 25th, is one of the longest-gestating pop albums in recent memory. According to bassist Tony Kanal, it’s a triumph that the album – the band’s first since 2001’s Rock Steady – was completed at all.

“We always knew it was going to happen,” Kanal says, “but there was a lack of clarity as to when it would happen. We went through a period when we thought, ‘Wow, will this ever get done?'”

The winding road to Push and Shove began in 2007 while lead singer Gwen Stefani was touring behind her second solo album, The Sweet Escape. In June, during the encore for one of her shows in Irvine, California, the other members of No Doubt joined her onstage for a four-song set that included their hits “Just a Girl” and “Hella Good.” “The response was so amazing that we said, ‘We have to start working,'” explains Kanal.

Not long after the show, the band convened to start writing new material, but Stefani was still exhausted from touring and was expecting her second child. The band was also hit with collective writers’ block. Those songwriting sessions and further ones in 2008 yielded little, and the band decided to give it a rest. “We know when it’s right and when it isn’t,” Kanal says. “We had to get that feeling again.”

Things only began clicking again in November 2009 after the band’s successful summer reunion tour. Kanal says he was skeptical of hitting the road and performing only old material, but the band was so energized afterward that they decided to give the new album another try. One song, “Undercover,” finally emerged, but work still progressed slowly throughout 2010, since Stefani was now the mother of two and only available three evenings a week. “We’d order in food and spend the first hour talking about life and kids,” Kanal says. “Between us, we have nine kids. But it was like, ‘This is fun again.'”

Finally, earlier this year, the band spent five months focusing on new material with producer Spike Stent (whose résumé includes Oasis, Madonna and Coldplay). Even then, the band frantically rewrote and tossed out material. One track, “Back in Love,” was almost scrapped until the band realized the intro could make a terrific chorus, resulting in an entirely different dance song, “Looking Hot.” When the album was almost done, Stefani suggested they needed a ballad, and out came “Undone” – but again, only after it was nearly abandoned. “Gwen went on a family vacation in England and emailed me from there and said, ‘I think there’s something here with this song,’ so we went back to work on it,” says Kanal.

The band’s love for reggae and dancehall still comes through in the lead single, “Settle Down,” and the title track (which featured a verse from Jamaican dancehall singer Busy Signal). “We want to sound modern, but we’re still influenced by ska, reggae and Eighties UK bands,” says Kanal. “There’s no way to escape who we are.” Kanal calls “Heaven” the band’s “homage to OMD, Depeche Mode and the Cure – the stuff we love to reference.”

The one thing Push and Shove doesn’t have are leftovers for future deluxe editions. “In the past, we’d write 20 songs for a record,” Kanal admits. “This time, our time was limited. So, no, no outtakes!” More seriously, Kanal adds, “For everyone, taking that long break was very healthy. Gwen needed to get that out of her system. She couldn’t have made those [solo] albums with No Doubt. And we’ve learned that if you try to force it, it doesn’t work with this band.”