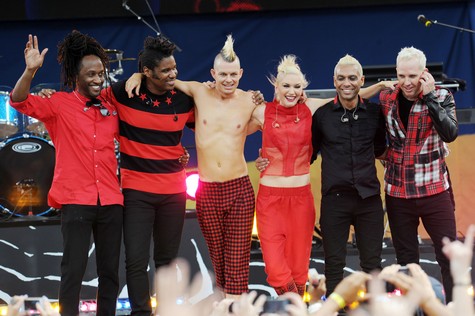 There’s a new No Doubt interview with CBS Local in which they discussed the new album and their musical influences.

“We’re still fans of a lot of people, a lot of bands. Should we list all the bands we love?” Gwen Stefani asks, laughing.

When No Doubt sat down with CBS Local in a spacious suite overlooking Central Park in the Mandarin Oriental in New York City, they were excited to talk about their new album, Push & Shove, but talking about the new meant touching on the old — as in, the band’s influences.

It turns out you can’t make a new No Doubt record without heavy input from the ’80s.

You probably best remember OMD from their ’80s hit song “If You Leave.” Specifically, you probably remember it as the prom song in John Hughes seminal teen movie Pretty In Pink.

The music John Hughes used in his films influenced an entire generation of listeners. It changed the way music was used in film soundtracks. The fresh sounds appealed to the young audiences who flocked to his movies. It helped evolve MTV from playing 75 Rod Stewart videos to favoring bands like OMD and Simple Minds. And it especially had an effect on the way radio stations, like the seminal KROQ in LA who would have been the station No Doubt grew up listening to, programmed music.

Stefani could easily be describing a No Doubt song when she talks about the sounds the band found themselves returning to.

“The Cure, Depeche Mode — I feel like those three…we just kept going back to,” Stefani continued. “I think they have something about them that has a little bit of everything. They have a pop sound, they have a rock sound, they have a dance sound…it’s a mixture of things. I would always try to get Tom [Dumont] to have that guitar sound of those bands.”

The ’80s aren’t their only source of inspiration — No Doubt have always touched on reggae and dancehall music and inject a certain Orange County swagger into their songs. But they consider the ’80s post punk, specifically the UK scene, to be an extension of their youth.

“It’s just something that feels so nostalgic for us, growing up on that music and discovering it and discovering ourselves at that time,” Stefani says. “Just trying to bring that into the feeling of this record.”

Drummer Adrian Young jumped in to talk about the inspiration he saw striking them.

“I would say that Simple Minds crept in quite a bit on this thing. You’d said on this record that the ’80s UK thing was a part of it but I feel like anything that someone grows up on, especially musicians, it’s always a part of you. And I think it always will be a part of us because the ’70s and ’80s were our formative years as intense music lovers.”

Simple Minds are best remembered for a song of their own that became a hit after being featured by John Hughes. “Don’t You (Forget About Me)” was the seminal end-credits track in The Breakfast Club.

“We literally were trying to write songs that felt like that,” Stefani confirms, looking to Kanal. “It has such a…I don’t know, that nostalgic sort of snap shot of that time period in your life. We were going back to that a lot. We talked about that a lot. There’s a song called ‘Dreaming The Same Dream,’ it’s the last song on the record. And if you don’t feel that when you hear that song I’ll be really sad. Because it was directly trying, we were trying, ‘We gotta write the prom song, come on!’ You know? That feeling of that slow dance.”

You’ll be able to judge for yourself when Push & Shove is released on September 25. It is currently available for pre-order on Amazon.