Thanks so much to Nikki for sharing with us scans of a terrific new Gwen article and interview in today’s edition of the OC Register’s Metro Magazine. It’s a great read in which Gwen discusses her generous charitable works through the years (CHOC Children’s Hospital and the Orangewood Foundation are local causes that remain close to her heart),as well as balancing her music and fashion design careers with family. We transcribed the article for everyone below-if you post the transcription on your websites,please give EIT credit. 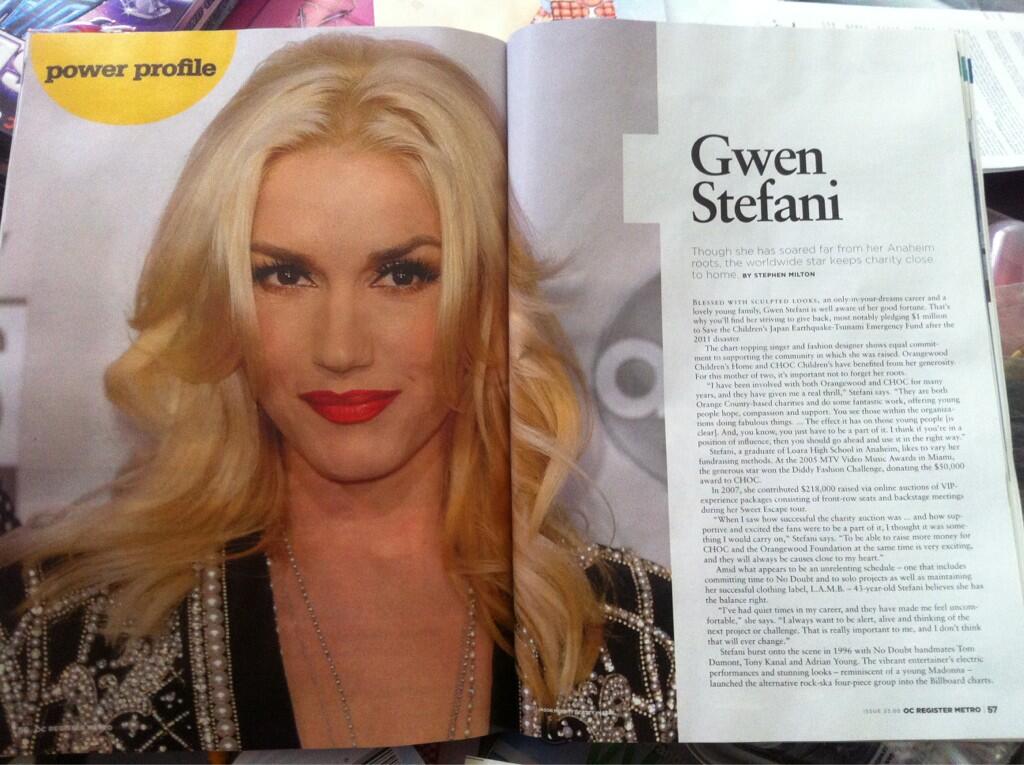 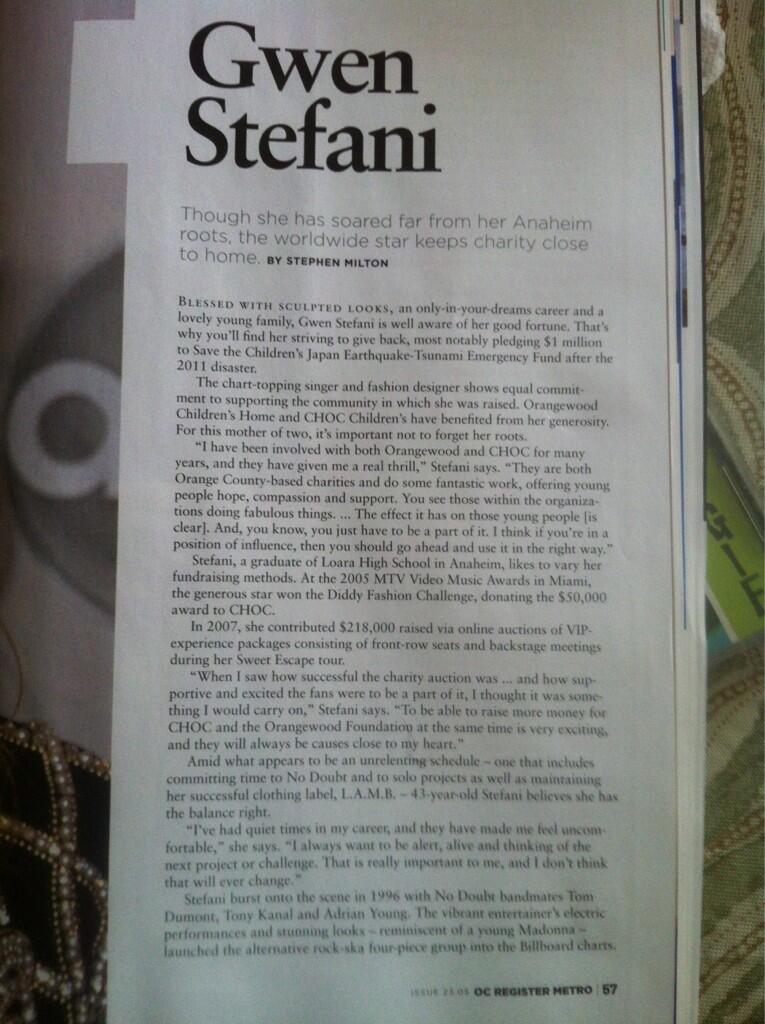 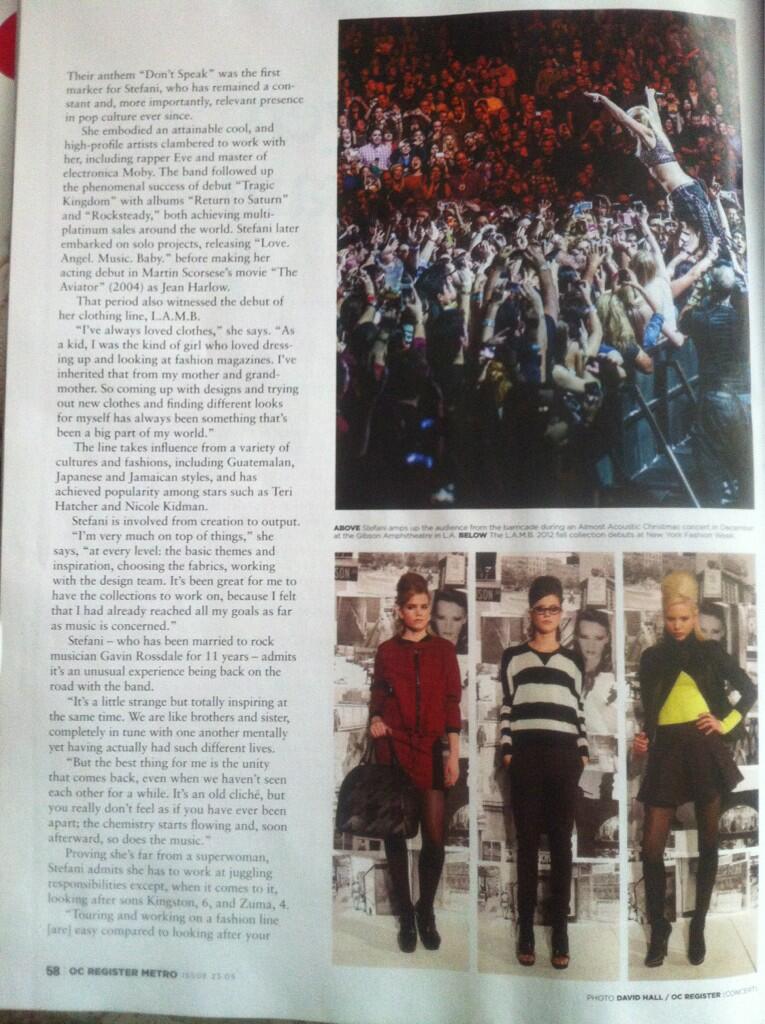 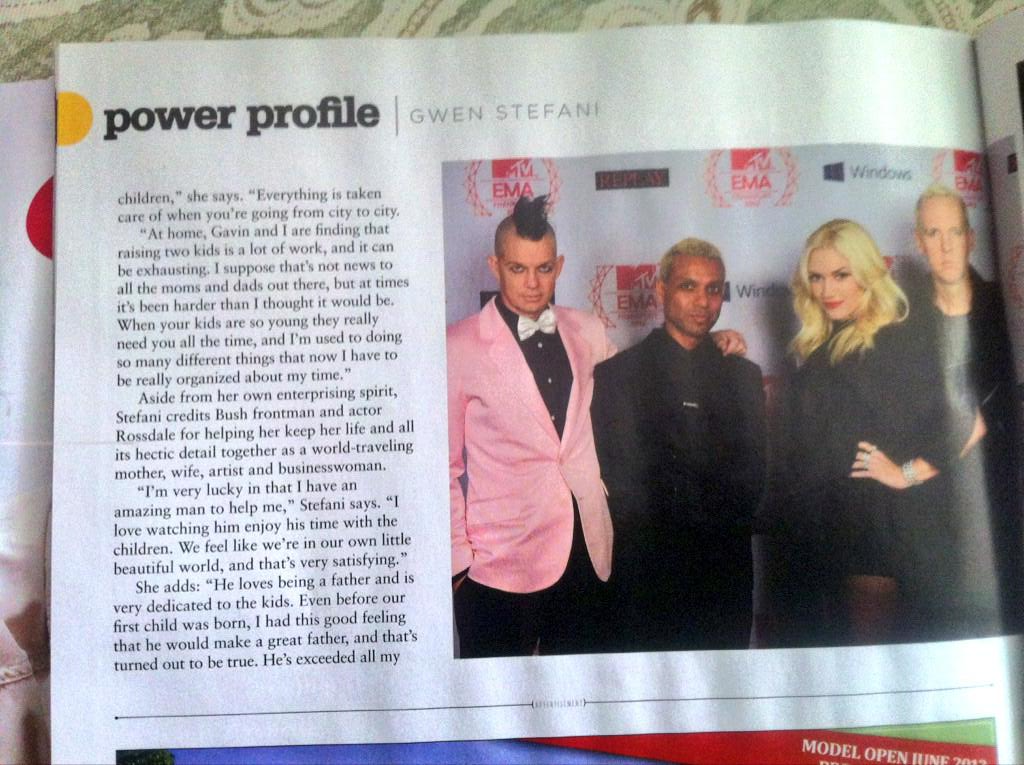 Blessed with sculpted looks,an only-in-your-dreams career and a lovely young family,Gwen Stefani is well aware of her good fortune. That’s why you’ll find her striving to give back,most notably pledging $1 million to Save the Children’s Japan Earthquake Tsunami Emergency Fund after the 2011 disaster.

The chart-topping singer and fashion designer shows equal commitment to supporting the community in which she was raised. Orangewood Children’s Home and CHOC Childrens’ have benefitted from her generosity. For this mother of two,it’s important not to forget her roots.

‘’I have been involved with both Orangewood and CHOC for many years,and they have given me a real thrill’’,Stefani says. ‘’They are both Orange County-based charities and do some fantastic work,offering young people hope,compassion and support. You see those within the organizations doing fabulous things…The effect it has on those young people [is clear]. And,you know,you just have to be a part of it. I think if you’re in a position of influence,then you should go ahead and use it in the right way.’’

Stefani,a graduate of Loara High School in Anaheim,likes to vary her fundraising methods. At the 2005 MTV Video Music Awards in Miami,the generous star won the Diddy Fashion Challenge ,donating the $50,000 award to CHOC.

In 2007,she contributed $218,000 raised via online auction of VIP-experience packages consisting of front-row seats and backstage meetings during her Sweet Escape tour.

‘’When I saw how successful the charity auction was,and how supportive and excited the fans were to be a part of it,I thought it was something I would carry on,’’ Stefani says. ‘’To be able to raise more money for CHOC and Orangewood Foundation at the same time is very exciting,and they will always be causes close to my heart.’’

Amid what appears to be an unrelenting schedule-one that includes committing time to No Doubt and to solo projects as well as maintaining her successful clothing label,L.A.M.B.-43-year-old Stefani believes she has the balance right.

‘’I’ve had quiet times in my career,and they have made me uncomfortable’’,she says. ‘’I always want to be alert,alive and thinking of the next project or challenge. That is really important to me,and I don’t think that will ever change.’’

Stefani burst onto the scene in 1996 with No Doubt bandmates Tom Dumont,Tony Kanal and Adrian Young. The vibrant entertainer’s electric performances and stunning looks-reminiscent of a young Madonna-launched the alternative rock-ska four-piece group onto the Billboard charts.

Their anthem ‘’Don’t Speak’’ was the first marker for Stefani,who has remained a constant and,more importantly,revelant presence in pop culture ever since.

She embodied an attainable cool,and high-profile artists clambered to work with her,including rapper Eve and master of electronica Moby. The band followed up the phenomenal success of ‘’Tragic Kingdom’’ with albums ‘’Return of Saturn’’ and ‘’Rock Steady’’,both achieving multi-platinum sales around the world. Stefani later embarked on solo projects,releasing ‘’Love.Angel.Music.Baby.’’ before making her acting debut in Scorcese’s movie ‘’The Aviator” as Jean Harlow.
That period also witnessed the debut of her clothing line,L.A.M.B.

‘’I’ve always loved clothes’’,she says. ‘’As a kid,I was the kind of girl who loved dressing up and looking at fashion magazines. I’ve inherited that from my mother and grandmother. So coming up with designs and trying out new clothes and finding different looks for myself has always been something that’s been a big part of my world.’’

The line takes influence from a variety of cultures and fashions,including Guatemalan,Japanese and Jamaican styles,and has achieved popularity among stars such as Teri Hatcher and Nicole Kidman.

Stefani is involved from creation to output.

‘’I’m very much on top of things’’,she says,”at every level: the basic themes and inspiration,choosing the fabrics,working with the design team. It’s been great for me to have the collections to work on,because I felt that I had already reached all my goals as far as music is concerned.’’

Stefani-who has been married to rock musician Gavin Rossdale for 11 years-admits it’s an unusual experience being back on the road with the band.

‘’It’s a little strange but totally inspiring at the same time. We are like brothers and sister,completely in tune with one another mentally yet having actually had such different lives.

‘’But the best thing for me is the unity that comes back,even when we haven’t seen each other for a while. It’s an old cliché,but you really don’t feel as if you have ever been apart;the chemistry starts flowing,and,soon afterward,so does the music.’’

Proving that she’s far from a superwoman,Stefani admits that she has to work on juggling responsibilities except,when it comes to it,looking after sons Kingston,6, and Zuma,4.

”Touring and working on a fashion line are easy compared to looking after your children”,she says.

‘’Everything is taken care of when you’re going from city to city.

‘’At home,Gavin and I are finding that raising two kids is a lot of work,and it can be exhausting. I suppose that’s not news to all the moms and dads out there,but at times it’s been harder than I thought it would be. When your kids are so young they really need you all the time,and I’m used to doing so many different things that now I have to be really organized about my time.’’

Aside from her own enterprising spirit,Stefani credits Bush frontman and actor Rossdale for helping her keep her life and all its hectic detail together as a world-traveling mother,wife and artist and businesswoman.

‘’I’m very lucky that I have an amazing man to help me’’,Stefani says. ‘’I love watching him enjoy his time with the children. We feel like we’re in our own little beautiful word,and that’s very satisfying.’’

She adds: ‘’He loves being a father and is very dedicated to the kids. Even before our first child was born,I had this good feeling that he would make a great father,and that’s turned out to be true. He’s exceeded all my expectations,and I’m so happy about how that part of our life has materialized,because children are a lot to deal with. It’s been the toughest thing I’ve ever had to do.’’
With so many commitments and since she regularly flaunts her washboard abs,one wonders when she has time to work out.

‘’It goes in phases,’’she admits. ‘’Right now I’m so busy with my kids ,I don’t have a set workout routine. But as a mom you’re running around so much that motherhood alone helps you stay in shape! I’m pretty happy,though,with how I look. I’ve always been kind of vain about my appearance,and I’ve always made a point of looking after myself and staying fit. I’m trying to be less anxious about wanting to always look my best. Touring pretty much took care of my fitness issues anyway.’’

If you’ve seen her onstage,this is easy to imagine as the powerhouse performer taps deep into her energy reserves to present a physically demanding show night after night.
Stefani says these days the emphasis on pushing a successful career even higher is not as intense,though she still has ambitions.

‘’To continue producing new work is maybe not as vital to me as it once was,but it’s still important. I’m very passionate about my music,and I want to keep doing it for as long as I feel I can keep going forward without repeating myself.

‘’As an artist,you always live with pressure,and in some ways it’s scary,but it’s also exciting.. You never know how it’s going to work out,but I’ve had enough success to know that I usually come up with something that I feel good about.

‘’Work is the one thing that always gets me out of periods of darkness,where maybe I’m struggling to decide my next move. So whether it’s my music or my fashion line,work will always be a big part of who I am.’’