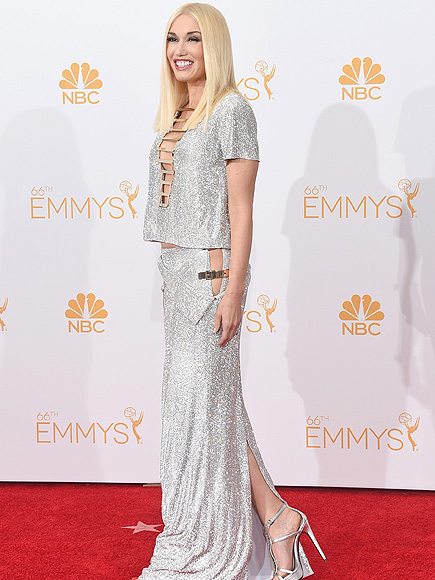 People interviewed Gwen at the Emmys yesterday and she talked about her life as a mom, how the boys are used to have her around all the time and about her preparating to The Voice. She says “It was just perfect timing for me, and it’s just such a different, inspiring thing to be around music in that kind of a way, and wearing a hat where I’m actually helping people. It’s very cool. Really good.” We can’t wait to see her as a judge on The Voice. The show premieres on September 22 on NBC.

People: Gwen Stefani has spent so much time with her kids since her third son Apollo was born that they all get a little surprised when Mommy heads off for a night out.

“I’ve got to tell you something, it is off the charts right now. I am spread so thin,” the singer told PEOPLE Monday night at the Emmy Awards, where she was a presenter.

“When I left today to come here, they were like, ‘Oh! Mommy! Ahh!’ They’re not used to it. They’re like, ‘Where are you going?!’ So I told them I was going to get in their bed when I get home and wake them up and kiss them.”

Her three sons with Gavin Rossdale – Kingston, 8, Zuma, 6, and Apollo, 6 months – may have to get used to their mom heading out a little more often now that she’s joined NBC’s The Voice as a judge.

On that score, Stefani, 44, couldn’t be more excited.

“It happened so spontaneously, I had no idea,” she said. “I had that baby, little guy, didn’t know what I was going to be doing next. And then they called, and I was like, ‘Alright, I’ll do it.’

“It was just perfect timing for me, and it’s just such a different, inspiring thing to be around music in that kind of a way, and wearing a hat where I’m actually helping people. It’s very cool. Really good.”

Stefani wore an eye-catching Versace gown with tiny Swarovski crystals on Monday. But just as notably, she didn’t wear her trademark red lipstick – and she didn’t at Sunday’s MTV Video Music Awards, either.