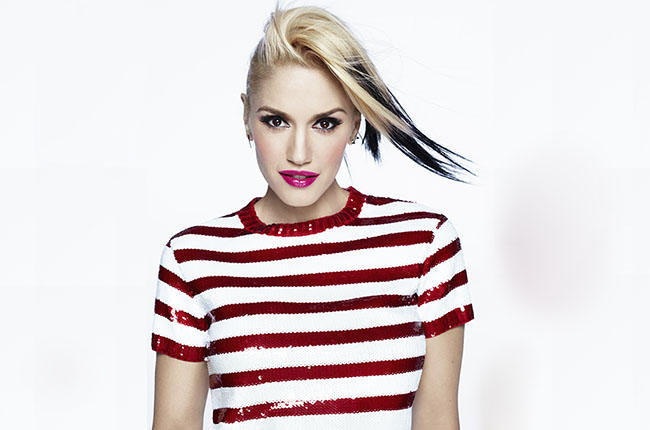 In a new interview with Billboard, Gwen discusses her return to the stage as a solo artist, her third solo album (work in progress), her eventful 2014, revisiting old songs, her partnership with MasterCard and a lot more! Read the full interview below.

Gwen Stefani is anxious to return to the stage as a solo artist, with her first headlining concert sans No Doubt scheduled at the Orpheum in downtown Los Angeles. Just don’t remind her of the date, which is during Grammy weekend.

“When you said February 7 I almost threw up right now — honestly, my whole stomach is cramped,” Stefani says on the phone from L.A.’s SoHo House, where she’s just wrapped the first in a series of appearances as the new spokesperson for MasterCard’s Priceless Surprises campaign — a role she took over from Justin Timberlake. “It’s so much work, and it’s so important to me that it’s awesome, and it’s happening so quickly. But that is kind of the theme right now, and I think it’s great.”

Stefani’s “theme” as of late is rolling with the many changes life has thrown at her in the last 18 months, from welcoming her third son with husband Gavin Rossdale last February, to joining The Voice as a coach this past fall to working on new music for her first solo album since 2006’s The Sweet Escape, including singles “Baby Don’t Lie” and “Spark the Fire.”

Originally pegged for a December 2014 release, the latter project is still a work in progress for Stefani, and she’s hoping to be newly inspired through the process of putting together her Feb. 7 concert for MasterCard cardholders.

“It’s gonna help me to write whatever’s gonna happen next — I’m hoping, anyway!” Stefani says with a giggle. “It’s already been a crazy journey, and all unexpected. I hadn’t ever expected to do new, dance music without the band. It wasn’t something that was even on my radar. Originally I wasn’t going to do The Voice because there was no way to do it with new No Doubt music — you know how we work, it takes awhile. But being able to collaborate outside of the band and work with different producers just speeds things along.”

But before she returns to the studio, Stefani needs to remember how to sing her old songs first. “I’m sort of like a goldfish,” she says. “I’m in the moment with everything. But it’s been really fun revisiting those albums, I feel really proud. But there’s a couple songs where, maybe I don’t need to do those ones live again.”

And there’s even more coming from Stefani in 2015, including the return of the Harajuku Girls, a new cartoon and … her own line of emojis? Read on for Billboard’s Q&A with the “Hollaback Girl” singer to learn more about her life of surprises.

How are you processing this eventful year you’ve just had?
How fast does time go by, right? It is a lot information in a really short amount of time, and a lot of surprises, which is so why this collaboration with MasterCard has been so fitting. It’s all about these Priceless Surprises. I can think about last year, it was just such a shock getting pregnant and such a gift and not something we were actually planning at all. And then the next thing I know, I have him and they call me about The Voice, and I’m like, “What?” I would have never considered that before, but it just felt like the right thing. It was just so amazing how inspiring that was, then it went by so fast. But that was the kind of thing I needed in my life to just switch things up. Having a baby, having a show, being around all that music, being with Pharrell and looking at music from a different view for something that was not about me. Just listening and thinking back to what I’ve done has just been a really interesting and reflective time.

You’ve been releasing new music as well. Is that leading up to a new album?
Obviously, I’ve been doing a new record and I just wanted to put new music out during my time on The Voice. So Pharrell and I made “Spark the Fire,” and I did a song with Ryan Tedder and Benny Blanco called “Baby Don’t Lie.” I had wanted to put a whole new record out, and I kind of could have, but you know when you know it doesn’t feel done. So I decided to slow down a little bit, and now I’ve got this [live] show I’ve been working on, which is forcing me to go back and listen to my old songs that I’ve never listened to in so long. But it’s been super inspiring, because now it’s like I’m in competition with myself, like, “How did I do that? I wish I could do that again.”

What appealed to you most about getting involved with MasterCard’s Priceless Surprises, and what sorts of surprises might you have in store for your fans as part of this campaign?
It’s been great, because everything I’m feeling is what I want them to feel. And I loved the idea that we can surprise them just by coming to your show or listening to a song on the radio and buying it or going out and buying a handbag, any of those things. That energy is very inspiring to me — like, I don’t know most of my fans but I want to do stuff that I love and then that transfers. I mean, really the biggest surprise for me is doing this show. This is really challenging for me because [performing solo] is not natural. No Doubt is natural, but this is much more theatrical. There’s a lot of layers to building a show like this — dancers, costume changes, lighting, screens with content, medleys, there’s so many moving parts, it’s crazy. I don’t even know how to tackle it, I’ve just been doing it one day at a time. But there’s something really great about MasterCard almost forcing me to do it. I wouldn’t be doing this if I didn’t collaborate with them.

You’ve been collaborating with Pharrell ever since No Doubt’s “Hella Good” in 2001. How do your two older kids process that friendship now that he’s so ubiquitous with “Happy,” “Blurred Lines” and “Get Lucky”?
My kids are huge fans of him, and it’s so weird because they don’t even know all the stuff I’ve done with him. And I’m like, “By the way, guys, I know Pharrell! I’ve worked with him.” They’re like, “Ooh was he your boyfriend?” “No, he wasn’t my boyfriend.” [Laughs] They’re really like super fans. I wrote him and sent him a video of my kids dancing to “Happy,” and I’d just had my baby four weeks ago. And he wrote back and said, “Oh my gosh, it’s so good to hear from you. I know it’s early, but would you want to play Coachella?” I was like, “What? I’m still trying to walk!” But I really wanted to because I wanted to show off to my kids and get up there and do “Hollaback Girl”. So the first time I walked out of my house was to go on stage with Pharrell. I even rented a tour bus to go out there. One of my boys fell asleep, but the other one saw it and it was amazing. That was the start of our new chapter.

Which of your old solo songs has it been most fun for you to revisit?
A song like “Yummy” — those lyrics are crazy. I listen to that like, “What was she doing?” Pharrell’s just so creative, I remember back then, and he’s always kind of been the same. He’s always so positive and so sure and he never wants to repeat himself. Like, “How can I make something different and new and not like anything else?” I look back at that whole record, and I think, “Wow I wish there was more time to do more singles.” You only get so many things that people hear, and I’m sure most people will come to the show to hear “What You Waiting For,” “Sweet Escape,” “Hollaback Girl,” but there’s all this music that I’m gonna share with a few hundred people.

Will the Harajuku Girls be making a return for this show?
It’s funny — we created a bunch of emojis for the “Spark the Fire” video with the same people who do my Harajuku stuff. I’m actually doing a whole animated Harajuku Girls cartoon. It’s weird, because the animation at the beginning and in the middle of the video, that’s actually the backdrop from the cartoon. [For the show,] I literally had storage pull out all of the old Harajuku costumes, because I kept all of them. Then I realized I was so generous that I donated two of each one of them, so now I have to start over again. [Laughs] But it’s gonna be fun, it is already fun. Usually everything I do is more about the process than the end result.