Make sure to check out Adrian’s interview in Modern Drummer’s May 2013 issue on newsstands now! We’ll have the interview up as soon as we can 🙂

UPDATE: Thanks to our friends at Beacon Street Online for sharing scans and a transcription of the article! We love the interview and the new photos,which were shot during rehearsals for No Doubt’s Gibson residency late last year. 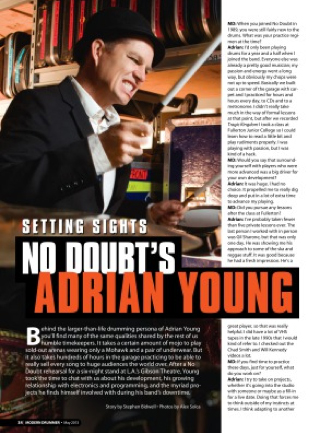 Behind the larger-than-life drumming persona of Adrian Young, you’ll find many of the same qualities shared by the rest of us humble timekeepers. It takes a certain amount of mojo to play sold-out arenas wearing only a Mohawk and a pair of underwear. But it also takes hundreds of hours in the garage practicing to be able to really sell every song to a huge audiences the world over. After a No Doubt rehearsal for a six-night night stand at L.A.’s Gibson Theater, Young took the time to chat with us about his development, his growing relationship with electronics and programming, and the myriad projects he finds himself involved with during the band’s downtime.

MD: When you joined No Doubt in 1989, you were still fairly new to the drums. What was your practice regimen at the time?

Adrian: I’d only been playing drums for a year and a half when I joined the band. Everyone else was already a pretty good musician; my passion and energy went a long way, but obviously my cops were not up to speed. Basically we built a corner of the garage with carpet and I practiced for hours every day, to CDs, and to a metronome. I didnt really take much in the way of formal lessons at that point, but after we recorded Tragic Kingdom I took a class at Fullerton Junior College so I could learn how to read a little bit and play rudiments properly. I was playing with passion, but I was kind of a hack.

MD: Would you say that surrounding yourself with players who were more advanced was a big driver for your own development?

Adrian: It was huge. I had no choice. It propelled me to really dig deep and put in a lot of extra time to advance my playing.

MD: Did you pursue any lessons after the class at Fullerton?

Adrian: I’ve probably taken fewer than five private lessons ever. The last person was Gil Sharone, but that was only one day. He was showing me his approach to some of the ska and reggae stuff. It was good because he had a fresh impression. He’s a great player, so that was really helpful. I did have a lot of VHS tapes in the late 1990s that I would kind of refer to. I checked out the Chad Smith and Will Kennedy videos a lot.

MD: If you find time to practice these days, just for yourself, what do you work on?

Adrian: I try to take on projects, whether it’s going into the studio with someone or maybe as a fill-in for a live date. Doing that forces me to think outside of my instincts at times. I think adapting to another band’s style just helps me improve.

MD: How does playing with other bands take you out of your comfort zone?

Adrian: There’s a certain comfort level from playing with No Doubt for twenty-five years that creates a pocket, instinct, and feel that is unique to itself. There have been times where adapting to another band’s style and feel didn’t come instantly. For example, I played with Bow Wow Wow for a few years, and the Burundi beat that runs through most of their songs is not only different from anything that I’ve ever played, it’s a unique way to play drums for songs that have been a huge part of popular culture.

In a different instance, when I subbed for Matt Flynn in Maroon 5 in 2010, I got the call while on the West Coast, and the first show was the following night in Rochester, New York. I had to learn the band’s whole set, most of which I was unfamiliar with, on a red-eye flight.

I feel that the goal when filling in it to make it as easy on the band as possible and to play the drum parts as similar as you can to the way they’re used to hearing them. In this situation, the added fire drill created an environment where I was happy to make it through one song at a time. In the end, I felt very good about the way it worked out. I enjoyed playing with the band and took away many positives from the experience.

MD: What are some other projects you’ve found yourself involved with?

Adrian: Besides playing in golf tournaments, I’ve played some with my brother’s band, Mo Bigsley. They’re a metal band from Orange County. I played on Scott Weiland’s record [Happy in Galoshes] and on Unwritten Law’s record [Here’s to the Mourning]. I also played with the Vandals some.

MD: Those are big shoes to fill.

Adrian: I think I played with them for the first time in 1998, and every few years when Josh Freese or Brooks Wackerman isn’t available, they’ll call me and I’m like, “I haven’t played that fast since the last time I played with you!” [laughs] It’s not something I do that often, so I kind of have to build myself up to it. But I love doing it, because we’re really good friends and I just have a good time playing with the band.

MD: Looking back on No Doubt’s evolution up to your latest album, Push and Shove, you’ve incorporated a lot more electronics and programming. How do you go about integrating those elements?

Adrian: On Push and Shove, I played more electronic drums than I had in the past. We did a lot of blending of electronic and acoustic drums, and on some songs I played electronic drums for a verse and then came in with the acoustic kit on the chorus. There was was more editing on our current record than ever before. A lot of us were making up our parts in the studio, whereas in the old days we’d work on the songs for a long time before we’d go in the studio.

MD: Has that presented any live setup and playing challenges?

Adrian: Yeah. Getting ready for these upcoming shows, there was a lot of back and forth on what we could put on the [backing] track, what things are important for the song, and what I could play physically. I have a Yahama pad that triggers a couple of sounds from the record, and if I feel any of the electronic parts are essential, we put them on the track.

MD: So you don’t feel that you’ve taken a backseat to programming and loops?

Adrian: It’s definitely become part of my life, at least for No Doubt. It’s not my cup of tea, really, but I think it makes sense for the songs I’m using it for.

MD: Does working with these elements make the record-making process any less engaging for you?

Adrian: I would say that there were times when it was less engaging, and part of that is because with this record we wrote mostly in the studio. There’s a lot of back and forth between programming and playing live kit. Does the programming sound good? Does the kit sound good? Maybe the programming is cool but I don’t like the sounds, so should I record the programmed parts myself? So there were a lot of different versions of each song to get it right, while it used to be a simpler process.

MD: There are quite a few snare sounds on the new record. Was finding the right ones a challenge?

Adrian: I wouldn’t say it was a challenge. To me, snare drums are like candy. There are so many flavors to choose from!

There’s a ballad on the new record called “Undone”, where I used my own personal WWII-era Radio King. It’s the only song that I used snare on, but it was appropriate and I really enjoyed playing it. On the track “Looking Hot”, I used a Black Beauty on most of it, but on the turnaround section I used my original Orange County 7×12 snare and added drum machine on top of it. It was just a huge blend of different stuff going on.

MD: You’re quite a golfer; have you ever found an analogy between working on your golf game and working on drumming concepts?

Adrian: Yeah, both seem to go better when I slow down. [laughs] If I had a fault with both of them that I could work on, I’d say I need to practice everything slower.

UPDATE 2: Thanks to No Doubt for sharing awesome HQ photos from the shoot!