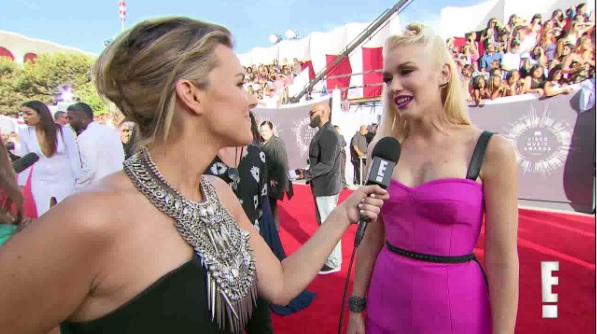 E! Online interviewed Gwen on VMAS’ red carpet and they talked about The Voice, Gavin and their cutest collaborations! The video cannot be embed, so click here to watch it!

Meet Gwen Stefani, comedienne.
This fall, the No Doubt singer will be making her debut as a coach on season 7 of The Voice, a gig she announced weeks after she gave birth to her and husband Gavin Rossdale’s third son.
Stefani talked to E! News on Sunday at the 2014 MTV VMAs about the NBC show, which marks her first full-time reality TV job and her first major, ahem, professional collaboration with the Bush singer, her hubby of 11 years, who will appear on the singing competition series as a mentor to the contestants on Team Gwen.
Stefani also said she was “anxious” about working with Rossdale on The Voice and added that the two almost got into a fight about it. She then launched into a mock impersonation of herself.
Watch the video above to see Stefani showcase her hilarious sense of humor during the interview and also find out what she said about her fellow newbie coach Pharrell Williams and veteran stars Blake Shelton and Adam Levine.
The Voice season 7 premieres on Sept. 22 (check out a promo pic).
The show is nominated for an Emmy at this year’s ceremony, which airs live on NBC on Monday at 8 p.m. ET / 5 p.m. ET.