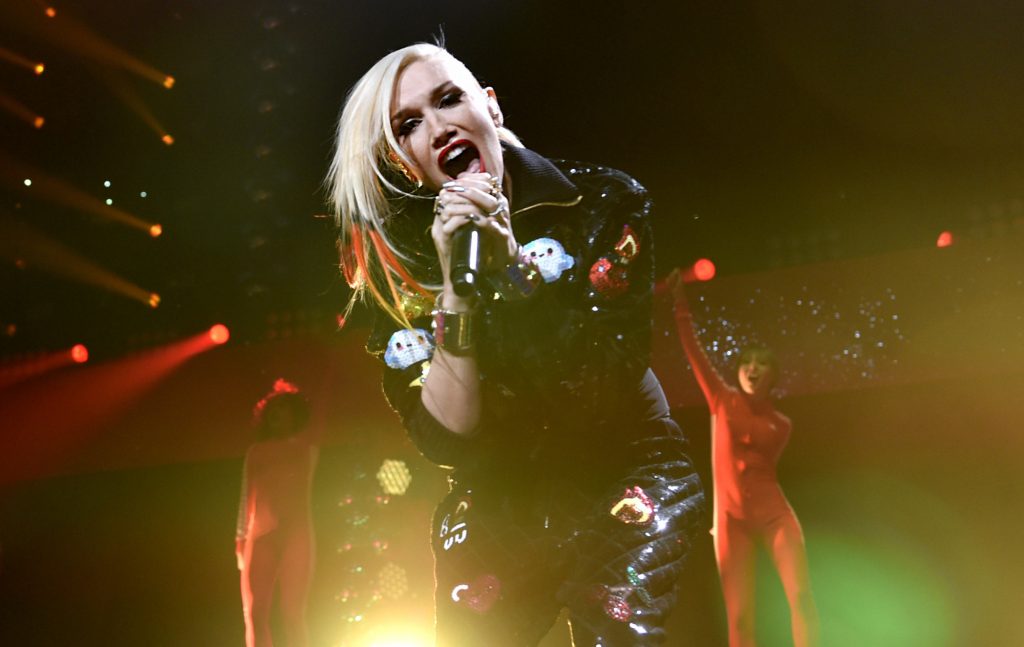 Gwen did an interview with TIME Magazine just a few hours before going on stage with Pharrell at the KIIS FM Jingle Ball 2014 and talked about her busy life, coming up with a third solo record, recoding with so many different artists, the “no more solo” promise she made few years ago, “Spark The Fire” and about the Harajuku Girls. Such a nice read! Enjoy!

“You can look at it from a negative point of view if you want to, but get off my cloud,” the singer tells TIME

Between three kids, a coaching stint on The Voice and a solo music comeback, Gwen Stefani is keeping herself busy. So busy, in fact, that the No Doubt front woman had to lock herself in her bathroom to find a quiet moment away from her children during our interview. TIME caught up with the singer — just a few hours before she performed her new single, “Spark the Fire,” with Pharrell at KIIS FM’s Jingle Ball — to talk about her upcoming album (due next year), Pharrell’s recent comments about feminism and what’s up next for No Doubt.

TIME: How did this third record come about? Were you itching to make another? Was Pharrell just sending you beats until you agreed?
Gwen Stefani: We were doing a No Doubt record — we did it, we put it out, and as soon as we came back from Europe in January, we decided, “Let’s go back into the studio.” The record had taken so long to make because all of our parental commitments and lifestyles, and because of the way we work. It’s my fault, but I get really lazy around those guys. We were working within the band and didn’t have any collaborators, so it just took a long time. We went back in the studio and worked for about six months, and I think the last session that we did was with Pharrell. It was six months of struggle. It wasn’t coming really naturally. I got pregnant unexpectedly, and it was a good time to take a break. I didn’t even know that I was going to have another baby, but it was such a miracle. Hold on one second, my other kid is here.

No problem!
My son’s tooth just came out — sorry. They just got home from school. [To her son in the background: Go put this under your pillow!] I’m going to go in my bathroom so I can lock myself in there, hold on one second.

Happy to wait.
Are you there still?

Yes!
Okay, so, we decided not to do any more work because I was pregnant — I was so sick. I didn’t know that was going to happen, and then I had the baby, and then four weeks later Pharrell called me to do Coachella. My kids were such a fan of him at the time because “Happy” was at the top of the charts. He was like, “Do you want to come do it?” I was like, “I want to! I’ll wear a black jumpsuit, I’ll be fine!” The first time I had left the house after giving birth was to step on stage and do “Hollaback Girl” with Pharrell. It was just magical. Then I found out a week later I was going to do The Voice, and I had no idea that was going to happen.

When that happened, the opportunity came up — maybe I should put something out, even if it’s a collaboration, or hop on someone’s record. Pharrell kept asking me to do “Hollaback Girl,” and I was like, “I’m not going to keep doing the same song from 10 years ago!” The only way to do that would be to not do it with No Doubt, because we take forever. I just starting thinking about having an open-ended thing: let’s just see how far we get. I hooked up with Benny Blanco, who I’d been working with possibly to do some No Doubt stuff earlier during that time period. He got all these different writers together — Charli XCX, Ryan Tedder, Calvin Harris. I started hanging out with Pharrell and we went into the studio.

I wanted to put a record out quick, like, I don’t want to think about it! Now, maybe I need to spend a little more time on it and not rush it. I’m going to continue to write a little bit. It’s been this weird surprise, doing new music. With the first solo records, I had a very clear plan of what they would be that was very distinct to that time period. Now it’s open-ended. I went in and did mood boards, a visual mood board of what it would be and started that way. With music, you sometimes just can’t really predict it.

On Love. Angel. Music. Baby., you sang about the fear of going solo. And then on the follow-up, The Sweet Escape, you sang about feeling guilty for doing it again.
Because of No Doubt or because of my kids? I can feel guilty about so many things.

Because of No Doubt — you had that line, “Only one solo / I swore.” Do you still have that little voice of hesitation inside your head?
There was a little bit, because I have so many different hats that I wear. I have my own life, I have my life as a wife, as a mother, as the singer of No Doubt, I’m on The Voice, and then I have all of my fashion designing things that I do. I’m always feeling like, am I giving enough to that? Am I giving enough to that? I just have to follow my instincts. When I did The Sweet Escape, I knew that I needed to do that. If you’re not inspired to do something, nothing comes. When I was about to do that second record, I did feel, “Should I go back and do another No Doubt record?” Everybody was waiting for me to do that, meaning my band. I just didn’t feel ready to do that music-wise, because I still wanted to do quirky dance music.

This time, that wasn’t even a option. It was either no new music and do The Voice or do some more dance music and just be free and see what happens. It wouldn’t be an option to do No Doubt because there was was no time! I had a baby, and then eight weeks later I was shooting the campaign for The Voice. It was very quick and unexpected. No Doubt has a bunch of stuff that we’ve worked on, and we’re going to see where we go next. It’s interesting, because it’s not one or the other. No Doubt doesn’t have to be on a complete hiatus for me to do new music on my own. It can happen simultaneously.

When Love. Angel. Music. Baby. came out 10 years ago, it didn’t sound like anything else out there. “Spark the Fire” is the same way — how do you pick sounds that still seem fresh years later?
That is such a flattering, sweet compliment, but I obviously don’t think about that. When you’re going in, you’re just thinking about what’s going to come out. Pharrell is a genius. He’s not scared, and he is only interested in doing something that’s different from what’s out there, in a really dangerous, punk rock kind of way. I just love being around him, because he’s such a purist, and he’s competitive in such a positive, creative, artful way. Just being around his energy puts me in a whole new chapter. He’s just been so supportive of me, and I don’t understand it. I’m like, “You’re the biggest, most incredibly talented, forward, modern producer-songwriter-artist of our generation! And I get to hang out with you and piggyback on all your success?” I’m so happy about it. He’s so generous and just wants me to do that.

He presented two songs to me that he wrote, and they were so weird and crazy. I was like, “But I really want something hard” — I don’t remember saying that, but he says that’s what I said. He came into my trailer at The Voice and was like, “I gotta play this!” He was crazy about it. We were meant to be going on [stage], and he’s like, “I don’t care!” He’s setting his Beats Pill up. “It has to have bass in it, if you’re going to hear it!” He plays me this song, and it was the beat for “Spark the Fire.” I was like, “That’s it, that’s it, we’re going to go in.” It sounded like a really good idea that morning, but by the end of the day, it was like, “Are we really going to the studio right now?” We went in and wrote that song. It’s so weird. Come on! I mean, it has this weird intro, this weird bridge, the lyrics are all over the place. It’s perfectly a mashup of us together, and it totally defines where I’m at.

Pharrell says this song is about feminism, which I’m not sure I get.
He calls it a feminist anthem. I would never call it that! Because it’s just not. That’s what he sees in me — I don’t see that. I see it as a personal song that is a really positive message about don’t mess with my vibe. I’m going to be up here, don’t bring me down. Get off my cloud, because no one’s going to take me away from this positivity. If I don’t do any other songs in this moment in my life, this one is definitely a good one to define this period. That’s all I can ask for. I just feel more grateful than ever if anyone pays attention. The longer that you have a career, the more precious you are about it, the more grateful you get, the more you realize that at any point it’s going to be gone. You don’t let one minute tick by where you’re not grateful for anyone listening to your song or getting joy out of that.

Looking back on Love. Angel. Music. Baby., do you regret the Harajuku Girls given the criticism you received?
No. There’s always going to be two sides to everything. For me, everything that I did with the Harajuku Girls was just a pure compliment and being a fan. You can’t be a fan of somebody else? Or another culture? Of course you can. Of course you can celebrate other cultures. That’s what Japanese culture and American culture have done. It’s like I say in the song [“Harajuku Girls”]: it’s a ping-pong match. We do something American, they take it and they flip it and make it so Japanese and so cool. And we take it back and go, “Whoa, that’s so cool!” That’s so beautiful. It’s a beautiful thing in the world, how our cultures come together. I don’t feel like I did anything but share that love. You can look at it from a negative point of view if you want to, but get off my cloud. Because, seriously, that was all meant out of love.

And the girls themselves, it was just a magical thing to get to know them. They were dancers that were cast, but they became real. One girl was a Japanese girl that grew up in L.A., and she got to hang around with three different Japanese girls that were from different places in Japan and had different backgrounds. They became best friends, and she got to go to Japan and see her heritage and see how we are all the same. And I got to hang out with girls for the first time.