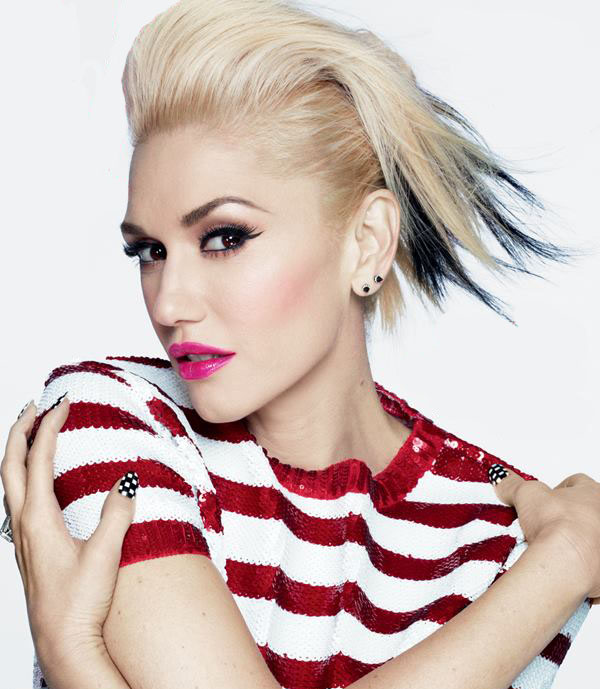 In a new interview with PrideSource, Gwen discusses pinting her boys’ nails, meeting gays “late in life”, her lack of girl crushes, her tomboy image during the early No Doubt years, the “Love is Love” project, working on “Spark The fire” and a lot more. Read the interview below!

From bed in her Los Angeles home, Gwen Stefani insists she doesn’t mind doing her first gay press interview in a decade on her day off. “I love talking about myself,” the No Doubt frontwoman says, giggling.

Set to release her third solo album this spring, Stefani rang to open up about her “late in life” introduction to the gay community, the lesson she’s teaching her boys when she paints their nails and how hubby Gavin Rossdale has broadened her worldview.

You were raised Roman Catholic in infamously conservative Orange County. Considering this upbringing, what was your introduction to the gay community?

Oh, that’s a really good question. I’m going back in my brain. When did I get introduced? I think my first friend that I had was Mathu Andersen – that was pretty late in life. He’s a makeup artist that I met doing the “Ex-Girlfriend” video (in 2000), and he was with this guy Zaldy, a designer who’d eventually work on L.A.M.B. with me. Then Mathu introduced me to Danilo, who ended up being my hairdresser, who introduced me to Gregory Arlt, my (current) makeup artist.

These guys have become some of my closest friends over the years, and also the team that have helped me creatively on so many levels. It’s interesting how it feels. All the people that I’ve met in the gay community in my particular life have just been very creative people and people that have just been friends to me in a way that I haven’t had in my life before that. It’s hard to put into words. I don’t know how to describe it, but it’s interesting because we can talk about so many things that we are all interested in and yet it’s different from having a guy friend or a girlfriend. It’s like having a creative partner.

When No Doubt first hit the scene, you were known for your tomboy image. Because of your style, were there times you were mistaken as a lesbian?

I don’t remember there ever being too many rumors about that. I think everybody knew my story, because when “Tragic Kingdom” came out I had broken up with Tony (Kanal), so everybody knew that “Don’t Speak” and all those songs were about that, so I think that’s probably why (there weren’t rumors). I was so young when all that started. I mean, I started the band when I was 17.

The way you’ve personally subverted gender norms seems to have influenced your three boys. You’ve gone with your oldest, Kingston, to get manis; also, he wore a tutu on his birthday. As a parent, how important is it to you to show your kids that there’s no wrong way to express themselves?

It’s one of those things where, it’s not like I don’t think about it, but they’re used to being around me, and I’m always doing my hair, makeup, nails. Their whole life is, like, sitting on my lap while I’m doing that surrounded by three gay men who are on me the entire time. (Laughs)

It’s just normal for them. What I like to say is that being unique and original is what makes me happy, and I think that rubs off on them. My sons did nails just the other day, and the only reason was because their nails were so disgusting! Like, they were in the mud and I was like, “We have got to do your nails! Why don’t we do ‘Nail Salon’?!”

I literally have 400 bottles of nail polish, so they took them all out and put them all over the bathroom. We really played “Salon” and we did tiger stripe nails. I said to Kingston, “Are you sure you wanna do pink, because you’re gonna go to school tomorrow? Are you sure you’re not gonna be embarrassed?” He said, “No, I don’t care; it’s a cool color.”

I just love that. It’s really important more than anything else to not be talked into something, to stand your ground and to be able to be strong about what you feel. That’s what I like and that’s what I want them to learn – that being individual and being unique is important. Don’t be scared of that. I don’t want them to try to be like everyone else, and at that age, everybody just wants to have the same shoes everybody else has, and I don’t really like that. If they do want to, I’ll support that as well. You just want them to be happy. It’s a short life and it goes by so quick.

Overall in my life I’ve been shy to be too politically active in any kind of way. I’m a Libra. I’m all about balance; I’m not about confrontation. I feel like I’m sort of rebellious, but you said it – I grew up in a Catholic family. I was the peacemaker of the family. I just wanted everybody to be happy. So, taking a stand was – I mean, obviously I have my feelings about things, but I’m subtle about it.

That shirt was not meant to be a big statement. It can work for that, but it doesn’t have to be for that. It wasn’t meant to be like, “Oh, I’m making a huge statement here.” What I’m saying is that this shirt can work for anybody. It doesn’t matter who you are, what you do and what you think – love is love. Take it whichever way you want to take it.

In the spirit of the emoji-filled “Spark the Fire” single, what’s your most used emoji?

These days, luckily, they have a little spark and fire and cloud emoji, so I’ve been using those a lot. The thing is, they’re right up my alley. Emojis are the perfect thing. Like, of course we have to have those!

I wish that I did. I feel like they invented them for me. (Laughs)

Pharrell called “Spark the Fire,” which he co-wrote and produced, a feminist anthem, but you say otherwise. What does that song mean to you?

Yeah, for me, it’s not a feminist anthem. Our relationship is so interesting. I say to him, “You are so talented and incredible; how do you come up with this stuff? It’s blowing my mind.” And he’ll say to me, “It’s you. I wouldn’t have come up with this unless I got the energy you gave me that night.” And I didn’t do anything! It’s so weird. His interpretation of me is: He thinks that I need to be the torch for feminism. (But the song) was so perfect for my story – for what I was feeling in my own personal life – that I didn’t even get it as a feminist anthem. I thought it was just about me! I was just feeling me.

What’s so weird is, it works on two levels, but it’s very personal for me. If it’s working for (feminism) as well, that’s awesome. But with “Just a Girl,” too, I wasn’t trying to make a statement at all when I wrote that song. I never even thought that anyone would hear the song. I was just making a personal statement about my life, about me, and I feel like this is the same thing. It’s really about me, my journey and where I’m at in my life. It’s just very personal. I love the fact that it kind of has two faces. But it’s funny, because he’s so fired up about it. Watching my journey, he knows a lot about me personally that maybe not everyone knows, so he sees me in a different way as well. He sees me as being really strong, and I don’t really see that as much. It’s really an incredible relationship that we have and a surprise that I would be hanging out with him so much again (after “Hollaback Girl” in 2004).

There are obviously lots of gays who adore you, but how aware are you of all the gay love for your hubby, Gavin Rossdale?

Girls and guys love him because he’s a beautiful person. The thing about him is, growing up in London – it’s such a cool place to grow up because there is so much freedom there, and there’s so much exposure to so many different people and art. It’s just a different way of growing up compared to (my) growing up in Anaheim. With all the music that we grew up to – and the British invasion and Vivienne Westwood and everything that I love about London in the ’80s – it’s been really amazing to be able to have a friend and lover like Gavin because he is from London. He’s a smart, interesting person, and he’s this connection to something I was a fan of growing up and getting to know London, where I think so much music and fashion has come out of, and which has so much history for me.

Let’s take it back to No Doubt’s “Staring Problem” and all those “cute girls” who made you jealous. These days, who can’t you stop staring at? Who are your girl crushes?

I’m not feeling a girl crush right now. I really am not. I’m sorry! There’s nobody. But I have to say that I like a lot of the new Taylor Swift. There’s a few songs on that record that I like and she’s a good songwriter. Charli XCX is a very good songwriter too – she wrote songs for my record – and who else? I mean, my favorite all-time girl songwriter is Joni Mitchell, but I wouldn’t say I have a girl crush on her. (Laughs)

After 2012’s “Push and Shove,” No Doubt postponed their tour to make new music because you said you were feeling inspired at that time. But then there was no new music and no tour the following year. What’s the story there? What derailed plans for a new No Doubt album and tour?

I got pregnant, so I was blessed by my little Apollo. That was something that I wasn’t planning. We were in the studio, I got pregnant, and I was very sick during the pregnancy so I didn’t do anything. I was designing and doing stuff from home, and then I had the baby, and then four weeks later “The Voice” called.

So, you’re caught up to date to today: I did the (upcoming) record because I couldn’t do a No Doubt record that quick – there was no way – so I was like, “Let’s do some new music with being on (‘The Voice’),” and then Pharrell happened to be there and then we had a song.

Everything that happened since I got pregnant, including getting pregnant, has been a complete surprise, and it’s awesome. I love that I didn’t know any of this was gonna happen, and now I’m plopped into this new chapter. I feel like I’m on a journey and I’m at a totally different point in my life, and it just feels good to be doing something completely different, new and unexpected.

Everyone’s always surprised you’re 45. And it’s true – you look half your age. What’s your secret?

(Laughs) Thank you! I do not have any secrets. I’m doing what everyone else is doing – just trying to make it last as long as possible on all levels.