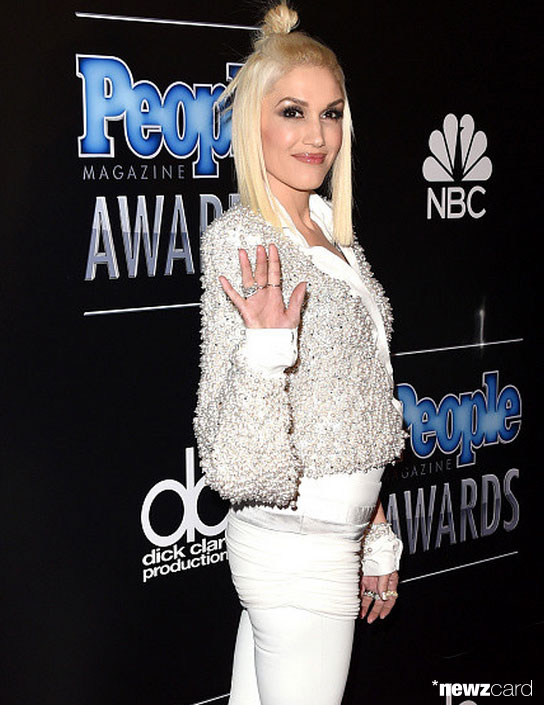 Gwen talked to People Magazine during the 1st People Magazine Awards Red Carpet and talked about her style, favorite pieces to wear and the Alexandre Vauthier Couture pearl-encrusted outfit she was wearing. Check it out!

It’s no surprise that Gwen Stefani was showstopping on the PEOPLE Magazine Awards red carpet — after all, her style is so good we couldn’t help but revisit her whole 2014 on the red carpet. (Even host Nick Cannon said “Gwen Stefani said she liked my outfit, and now my night is complete!”)

And in her Alexandre Vauthier Couture pearl-encrusted jacket and J Brand pants (not to mention that hairstyle — check out the 360° above!) she certainly lived up to her reputation as a fashionista. And as an incredibly fit person.

The jacket “weighs about 2,000 pounds. I’m not kidding you. Feel this part! It’s definitely — it’s worth it — it’s so beautiful, it’s such an amazing piece,” she said on the red carpet.

Asking her to pick her favorite dress is almost as hard as wearing the jacket. “There’s been so many outfits being on [The Voice]. I really like making pieces,” she says. “The finale piece I made yesterday was a L.A.M.B. custom, kinda chunk-some thing that we did. I made another piece that was L.A.M.B. earlier that had a little black-and-white kinda thing. Those are my favorite, they take time, there are a lot of fittings. But I love the process and kind of doing that — it’s like the reward of the work.”