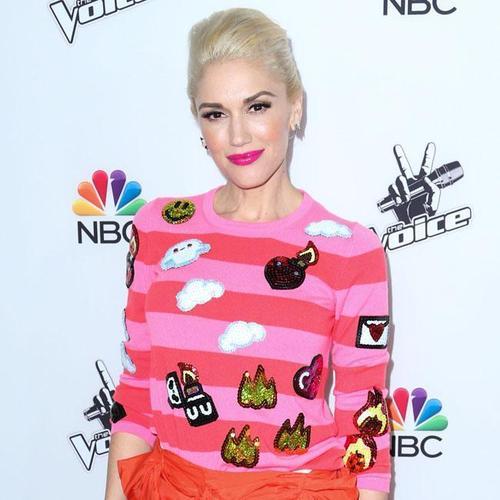 In a new interview with Yahoo!, Gwen talks about how making music has changed after she had kids, working with Pharrell, the will to create “Hollaback Girl 2.0”, studio sessions with No Doubt, getting pregnant, wheter or not releasing a full third solo album or just a couple of songs and much more! Here’s the full interview!

When Gwen Stefani made a surprise appearance last April during Pharrell Williams’s set at the Coachella festival — looking absolutely fabulous less than two months after giving birth to her third child at age 44, and right before she accepted a high-profile coaching job alongside Pharrell on The Voice — that famous mommyspeak phrase, “I don’t know how she does it,” certainly came to mind.

Now, with two new singles — “Baby Don’t Lie” and “Spark the Fire,” her first solo songs since 2008 — released in the middle of this Voice season, and more music on the way, Gwen tells Yahoo Music she wouldn’t be able to do it all without some help from her famous friends… namely Pharrell, the man she calls “the best producer/songwriter of our generation.”

“Making music is just not the same, and it’s never going to be the same after having kids,” Gwen says frankly over the phone from her Los Angeles home, interrupting the interview for a moment to attend to her 6-year-old son, Zuma, who has just lost a tooth. “I remember when I did the Love. Angel. Music. Baby. album. I’d just gotten married and just started L.A.M.B.; I was doing my first thing outside of my band and I made that record, and it was a magical time. And then I got pregnant, right before my tour, with [first son] Kingston, and then eight weeks after I gave birth I went back in the studio, because I was like, ‘I gotta put another record out!’ Because I didn’t feel done. I still had a lot of songs that I hadn’t put out from the first record. But it’s just different once you have a baby. There’s no way to go back to having the freedom that you had creatively, because your energy is always going to be focused on the kids. Family and marriage and all those things have to come first, and it’s really different.

“So that’s why now, for me, the only way to make music is to collaborate. That’s really the only way that I could possibly make a record. Any mom that has even one baby is probably thinking, how do I do it, because it’s not possible! But because I have all these talented writers and all these incredible people helping me, I’ve been able to do it. So I feel more grateful then ever. To put out ‘Spark the Fire’ is such a gift. It just feels very precious, because this is not the beginning of my career. So it feels like anything at this point is beyond icing on the cake. I’m so grateful that anyone even would listen.”

Gwen debuted the hard-charging club banger “Spark the Fire” earlier this month with Pharrell on The Voice. It’s the latest in a line of Gwen/Pharrell collabos that dates back to No Doubt’s 2001 hit “Hella Good” (“an insane turning point for No Doubt”) and Gwen’s 2004 solo breakthrough “Hollaback Girl” (“the ultimate song, exactly the kind of song I’d dreamt I could make”).

Gwen recalls her first meeting with Pharrell more than a decade ago: “He was this young little hip-hop guy, rebelliously wearing, like, alligator shirts, and riding skateboards — which was so not hip-hop, do you know what I mean? He was always in his own lane, and that really attracted me. I was quite intimidated by him, because he was so creative and cool.”

Of course, the challenge when returning to the studio with Pharrell, after a six-year solo recording hiatus, was living up to the legacy of her biggest smash song. But surely Gwen didn’t want to just crank out “Hollaback Girl 2”…

“I actually wanted to do ‘Hollaback 2,’” Gwen laughs. “I was like, ‘We gotta do something as good as that!’ But Pharrell is different. He doesn’t care. He’s a magical creature, I don’t even know. He doesn’t follow the same rules. He’s so positive and so inspired. He was ready to go do something crazy. He was doing this crazy stuff, like weird ’80s stuff. I don’t even know what kind of music you call that. And I was like, ‘Really? This is what we’re gonna be doing?’ It just seemed a little bit way to the left. But he was like, ‘No, this is the energy I’m getting off of you, trust me.’ He sees some weird stuff in me and I just have to roll with it, because I don’t want to ever try to get in the way of his insane, creative mind.

“And I guess I had said something to him like, ‘I really want to do something that’s hard,’ though I don’t even remember saying that! But that’s when he came to me to my Voice trailer after being up all night, and he had the first beat to ‘Spark the Fire.’ As soon as I heard it and he started singing the melody on top of it, I knew that was the one. So then we went off that night; we’d worked all day at The Voice and then that night we drove off and wrote the song and stayed up till 3 or 4 in the morning. And we had to be back on the set at 7 a.m.!”

Pharrell isn’t the only artist Gwen is collaborating with these days. She recently lent her guest vocals to Calvin Harris’s “Together” and teamed with another Voice co-star, Adam Levine, for Maroon 5’s “My Heart Is Open.” And her upcoming third solo album will feature contributions from her obvious soundalike successor, Charli XCX, as well as OneRepublic’s Ryan Tedder and super-producer Benny Blanco, who worked on “Baby Don’t Lie,” Gwen’s other 2014 single.

“I was talking to Benny about doing stuff with No Doubt. What happened is we were working on No Doubt stuff, right before I got pregnant, for about six months. But it was quite hard; sometimes when you’re writing, things just happen and it flows, and then other times you have to really struggle. And it felt kind of struggle-y,” Gwen recalls. “And then I got pregnant and then I got really sick with the pregnancy, so I didn’t continue in the studio. And then The Voice called right after I had the baby. So I couldn’t really do No Doubt.

“But I wanted to do new music while I was on the show, so that’s when I went in with Benny. I’d just had the baby and I was on The Voice set, so he would start songs and send them to me, I would work on them, back-and-forth via email. Then he would come to my house and we would record upstairs, because I was nursing. It was crazy, trying to make it happen.”

As for when Gwen’s full album will come out, she admits, “I didn’t always have a plan — even the label was like, ‘Look, it doesn’t have to be a whole record, it could be a couple songs. It could be someone else’s songs.’ Who knows what the record will actually end up being? I had this whole schedule together at first, but I’m kind of undoing it, because I feel like, why am I rushing it so fast? I don’t really want to rush it. So now I’m kind of slowing down and thinking I want to go back in and do a few more writing sessions, just to fill out the record and make it a little bit more personal. I don’t really know what’s going to happen.”

As for whether Gwen will find time in her busy schedule to do another season of The Voice (she won’t be back for Season 8, when Christina Aguilera, who just had a baby herself, returns to the panel), Gwen says: “I would love to! I had the time of my life. It was extraordinarily perfect, like amazingly inspiring for me at this time in my life, such a cool thing — so modern, so what’s happening right now. I loved being part of it, and like I said, nothing gets planned anymore, so I guess if it happens, I’m sure it will happen. And I’ll find out, like, a minute before.”

For now, Gwen is just enjoying the present. “‘Spark the Fire’ is just really a perfect snapshot of this moment where I’m at in my life, exactly how I feel, with a line like ‘hey, get off my cloud,’” she says. “I’ve been riding this cloud for a while. I’ve been on this high, and I just don’t want to come down. I don’t want anyone to try to bring me down from it.”