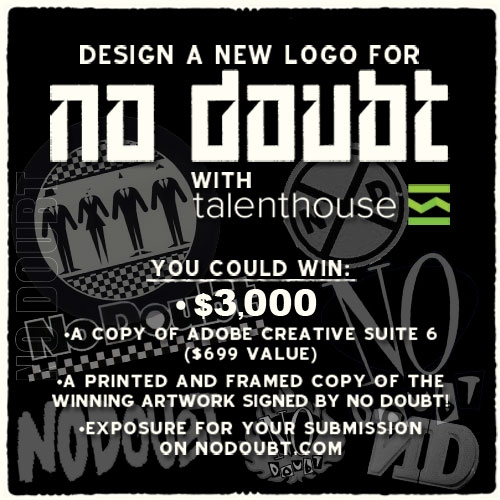 Talenthouse has just announced that the deadline to enter the No Doubt logo design contest has been extended until September 11. The voting period will now take place between September 12 and September 18 and the winner will be announced on September 25,the day the Push And Shove album is released in the US. Once again,we wish everyone entering the contest the very best of luck!!

No Doubt will be releasing their highly anticipated sixth studio album, Push And Shove, on September 25, 2012. In celebration of the album and the release of its lead single “Settle Down,” No Doubt is inviting fans and creative designers to be a part of it all. Aspiring designers have the opportunity to design a new logo for the band and the chosen winner’s logo will be featured on merchandise for Push And Shove.

One winner will have their design featured on Push And Shove’s merchandise in celebration of the album’s September 25, 2012 launch. In addition the winner will receive:
•$3,000
•A copy of Adobe Creative Suite 6, value of $699
•A printed and framed copy of the winning artwork, signed by No Doubt
•Exposure for their submission, which will be featured across No Doubt’s website and social media channels

The highest voted will receive:
•$1,000
•Exposure for their submission which will be featured on No Doubt’s website and social media channels