Tony just shared a brilliantly-written letter he recently wrote to Ripley’s Aquarium of Canada in Toronto asking it not to allow rowdy parties if it intends to keep whales and dolphins in the building,since such noise can be harmful to marine mammals’ sensitive sonar systems. Tony received a reply from the aquarium in which they assured him that it will not be holding marine mammals in its facility. Fans can also take action by asking other aquariums in the US to stop tormenting mammals with blasting music. Thanks to Tony for his tireless support of animal rights and for inspiring fans to do the same.

Although some aquariums are still willing to host raucous parties despite knowing that the pounding music is hell on marine mammals’ sensitive sonar systems, more progressive aquariums are refusing. Case in point: Rocker Tony Kanal teamed up with PETA to let the under-construction Ripley’s Aquarium of Canada in Toronto know that rock belongs in arenas, not aquariums. Here’s his letter asking the aquarium not to allow rowdy parties if it intends to keep whales and dolphins in the building: 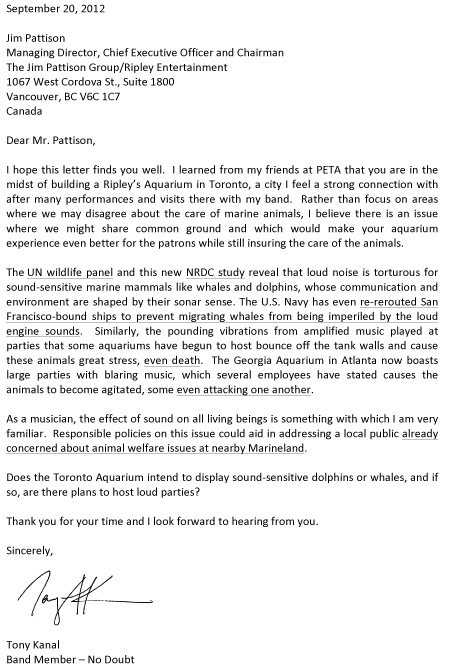 Not only is Ripley’s saving whales and dolphins from becoming disoriented and agitated when deafening music disrupts their ability to navigate and communicate via sonar, the aquarium is also saving them from the lifetime of frustration, illness, and stress that they would have had in captivity.

While all marine mammals deserve their freedom, the least that aquariums can do is not torment them with blasting music. Join Jane Lynch in asking Atlanta Pride to move its upcoming party to a more humane venue than the Georgia Aquarium, and join Tommy Lee in asking SeaWorld to cancel its loud “Shamu Rocks” shows.