UPDATE: No Doubt just confirmed that the ”Settle Down” video is up for the Audience Award on May 1! We wish them the very best of luck!!!

“Settle Down” is up for an Audience Award this WED 5/1 at the 2013 @nbff! Get tickets here: bit.ly/nbfftix twitter.com/nodoubt/status…

No Doubt just tweeted to announce that ”Settle Down” has been nominated at the 2013 Newport Beach Film Festival happening from April 25-May 2! The band said more info would be coming soon,but we did a little research and found out about a new partnership the film festival formed this year with the Orange County Music Awards. According to this,the winner of the Orange County Music Awards ‘Music Video’ category automatically earned a spot in the 2013 Newport Beach Film Festival Music Video Showcase. Since the ”Settle Down” music video won that category at the OC Music Awards ceremony last month,it will be featured in the showcase. A press release about the festival also mentions that the ”Settle Down” video will be featured along with 17 other music videos from artists around the world. Much congratulations to No Doubt on the amazing ”Settle Down” video being showcased at the festival-we hope to find out even more details about the showcase soon!

“Settle Down” has been nominated at the 2013 @nbff! More info coming soon… twitter.com/nodoubt/status…

The Newport Beach Film Festival is thrilled to announce a new partnership with the Orange County Music Awards and the launch of the 2013 Music Video Showcase.

The Newport Beach Film Festival (NBFF) will celebrate its 14th anniversary with an action-packed line up of independent and studio films from around the globe. Scheduled to take place from April 25th – May 2nd, 2013 in Southern California, the Festival will screen an international slate of over 400 films, including feature-length narrative, documentary, short, animated and student films that will compete for a series of Jury, Festival Honors and Audience Awards.

Designed to celebrate music videos as a cinematic art form, the Music Video Showcase will feature all forms of musical talent and filmmaking styles from around the world. The newly created program seeks to provide recognition, exposure, new audiences and networking opportunities for emerging and seasoned filmmakers, artists and musicians.

Artists who submit to the Orange County Music Award in the ‘Music Video’ category will receive a special submission discount to the Newport Beach Film Festival. Visit www.OCMusicAwards.com for more details!

The Newport Beach Film Festival’s highly popular Music Series continues to expand for the Festival’s 14th year. The Music Film Series features 9feature narrative and documentary films that put music center stage highlighting musical performances, historic headlines and the unique stories behind struggling musicians. The punk band, Green Day, is featured in two documentaries: the Opening Night Film BROADWAY IDIOT and ¡CUATRO!, the documentary exploring the making of Green Day’s latest studio albums. Other highlights include GREETINGS FROM TIM BUCKLEY a narrative about both Tim and his son Jeff Buckley; SECRET DISCO REVOLUTION documenting the disco era; IN YOUR DREAMS: STEVIE NICKS Directed by and starring Stevie Nicks. In addition the Festival’s newly created Music Video Program, designed to showcase the medium’s unique partnership of film and music, will feature 18 music videos from artists around the world including No Doubt’s SETTLE DOWN and The Black Keys’ THE BADDEST MAN ALIVE.

EDIT- According to the festival’s online program,the ”Settle Down” video,along with the other videos in the showcase,will be screened at The Triangle venue in Costa Mesa on Wednesday,May 1,at 8 PM. Tickets for the event are available HERE. 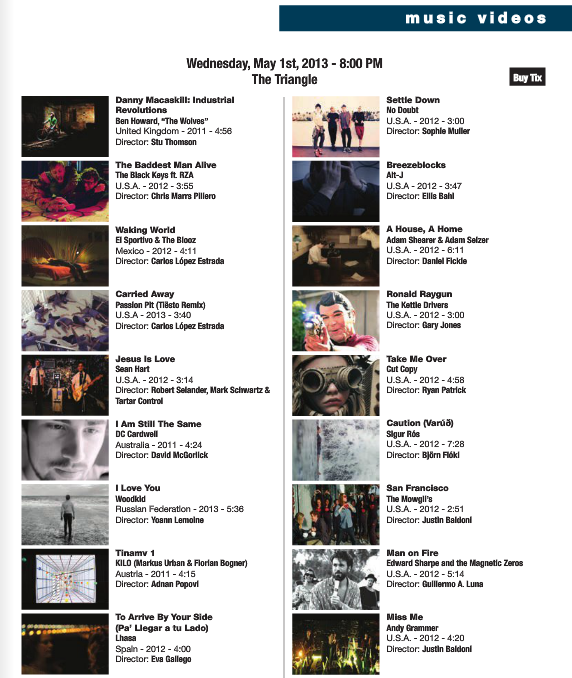