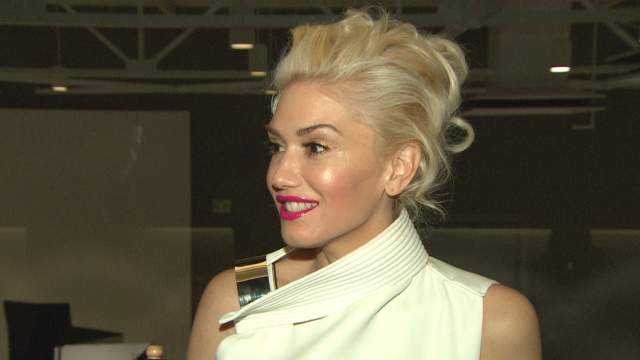 Just watched Gwen’s interview on Access Hollywood-she addressed the marriage rumors and talked about the family fishing trip over the weekend,which we had mentioned earlier. Access also showed some footage from the set of Gwen’s new L’Oreal Superior Preference commercial-she had the same gorgeous look as the photo we had postedhere a few days ago. We cannot wait to see the new commercial!! The interviewer then went through a timeline of Gwen’s fashions,showing her photographs of her evolving style through the years: He showed her this Tragic Kingdom-era photo,and Gwen said that Gavin had given her the sweater she is wearing in it and she later added sequins to it. She joked that by the looks of the photo, she needed to have her hair done,lol. The interviewer then showed her the 1999 photo of her with the pink hair and braces,and she mentioned why she got braces,again,as we already posted a clip of. He then showed her a photo from the 2006 Grammys Awards,when Gwen was pregnant with Kingston-she said the empire waist of her L.A.M.B. gown was a necessity. She was then shown a backstage photo from her 2006 TRL appearance-the interviewer said she looked ‘’Madonna-esque’’ in the photo,and Gwen replied,’’I hope so.’’ We hope to have video of the full interview up soon!