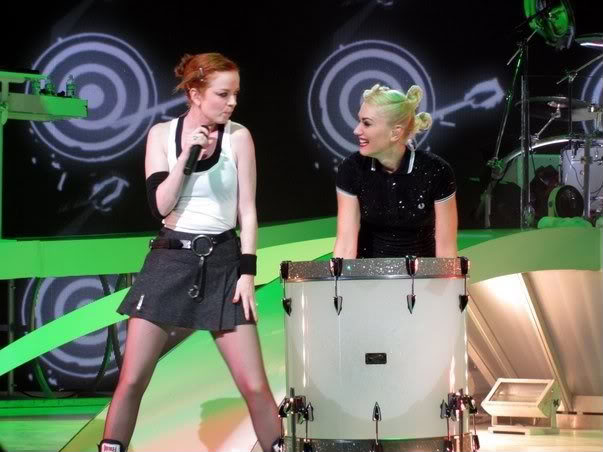 Thanks so much to Sophie for sharing excerpts from past online journals Shirley Manson of Garbage wrote that mention Gwen;the entries range between 2001-2004,and Shirley mentions everything from Garbage touring with No Doubt during the Rock Steady tour,to Gwen filming The Aviator and working on Love.Angel.Music.Baby. It’s really sweet what Shirley says about Gwen. (By the way,if you are a Garbage/Shirley Manson fan,be sure to check out Sophie’s awesome new fansite,AbsoluteGarbage.net!)

Shirley used to post little blogs online when she was recording and performing with Garbage, and reading through them the other day after saving them – the website they were on has vanished – I saw she mentions Gwen quite a bit, particularly around 2001/2002, when No Doubt toured with Garbage. After a couple of requests on Twitter I thought some people might like to read those extracts here too! This isn’t even all of them, I missed out one or two or the less relevant ones. enjoyyy ;D

So what else? Well I can’t stop listening to “Let me blow ya mind”, the track Eve recorded with Gwen Stefani.It’s just so completely infectious and both girls are bursting with so much hutzpah that they absolutely deserve to be universally adored.
(April 23, 2001)

Banged into ubercutie Gwen Stefani in the hotel lobby this evening.No DOubt are in town taking over from us on the U2 tour.(They’re playing the second show at Madison Square Gardens.) It was fun seeing her again. She’s a riot.
(October 23, 2001)

Got a despondent e-mail from Gwen Stefani who is suffering similar problems on the road (poor wee lambchop) and she’s been forced to cancel a couple of shows in an effort to recover herself.I feel really bad for her cause she sounded so fed-up.
No one wants to have to cancel a show.
And she’s a tiger………she doesn’t like having to admit defeat so I can imagine how badly she feels.
(April 28, 2002)

Gwen Stefani and I also loosely discussed the possibility of Garbage opening some dates for ND later on this year.I mean……..I really respect that No DOubt do their own thing and stand out from all the other bands out there right now. I think our fans (and vice versa ) would be well into the pairing.We’ll just have to wait and see if it all pans out but I think ND and GArbage would make a great bill.
(June 26, 2002)

Arrived at the shoot to be met by Lisa RObinson of Vanity Fair who explained to me that Gwen Stefani’s flight from London on Concorde had been forced to turn back to the airport an hour and a half into the flight thus stranding our poor little lamb at Heathrow.She was due to get on a commercial flight later on the day but it meant that our photo shoot was going to run much later than initially planed….
Gwen finally arrived on set somewhat shaken although looking perfectly divine as usual and we high fived each other on the decision that had been made earlier on the day that Garbage would open for No Doubt on their tour of the USA and we both let out a squeal of pleasure whilst doing so!
(July 24, 2002)

Last night we joined the No DOubt tour in Kingston,R.I and played our set to an amazingly enthusiastic and responsive crowd.Gwen popped in just before we went on and we had a wee squeal and cuddle.We’re both pretty excited to be actually touring together.It makes such a change from the usual, all male company we’re forced into keeping on the road.
(October 16, 2002)

Watched most of the No Doubt show last night and confirmed inwardly that Gwen is one of the greatest pop stars of her generation.And that body of hers……oh my goodness,that body!
(November 5, 2002)

Had a blast at the show last night in Houston.The crowd was unbelievably noisy and I sang my *** off.
No Doubt were all horribly hung over, having spent their day off in New Orleans dressed as pirates.I swear to god,when I saw Adrian this afternoon he looked like someone had smashed him over the head with a mallet!!!
(November 2, 2002)

Sophie[Muller] from the uk last night to join us on our last leg of the tour, down the California coast.She’s going to be filming a Live DVD for No Doubt so she’ll be around the entire time which I am completely delighted about.She’s so much fun to hang out with and it’s great for Gwen to have her best friend out on the road with her.Good for morale and all that.
(November 15, 2002)

Had a disgustingly girly session with all the ladies on the tour yesterday.Sophie,Brody and I all congregated in Gwen’s dressing room and gossiped and giggled and watched her do her mad stomach workout as the rest of us all sat there and felt slothful and shamed!!! Nevertheless,there’s such an amazing energy and camaraderie on this tour.I’m loving it.
At the end of the night during No DOubt’s encore we tried doing “Call Me” again but we couldn’t stop laughing at each other the entire way through the song because we couldn’t remember any of the bloody words so we just kept making them up and to say it was a mild fiasco is being EXTREMELY generous.
(November 17, 2002)

I was in SUCH a bad mood yesterday.I think I must be PMS-ing.Funnily enough….all three of us tour girls were in bizarre funks yesterday and it turns out that not only are Brody and I in sync but Gwen and her female personal assistant are in there with us too.
EEeuch….it gives me the creeps all that bodily function stuff!!!!.It’s just so friggin’ yucky.Like we’re not in control of ourselves in the slightest.That some weird force binds us to people and places and controls our bodies and so help me god, I can barely stand the thought of that.
(November 20, 2002)

once I came off stage and ate copious amounts of sushi and then strode on stage with Brody at the end of No Doubt’s set and sang “Call Me” for the third and what was,for numerous logistical reasons the last time we will ever perform that particular song together on this tour.We’d rehearsed it at soundcheck for once so we actually all sang it pretty well and it didn’t seem like the crazed flail that it has been in the past.

There was such a magical vibe last night though when we got up on stage.Everyone was relaxed and happy and “The Three Diva’s” felt connected and in tune and we were all grinning like half wits and I thought to myself…this is how tours should always be.Chaotic and energetic and full of fun.
After the show we all piled back to Adrian’s house for a party and Sophie,Brody and I spent the entire night growing increasingly animated about god only knows what, which then of course culminated into a full scale argument over total and complete nonsense which is what generally happens when girls like us attend parties that spin into the night.It was so cute because Gwen was in utter heaven due to the fact that Gavin had just flown in from London earlier in the evening and so needless to say, they spent the entire night just looking so happy and sickeningly gorgeous together. I wished I could bottle the entire atmosphere of the night and pour it over every single tour I ever do in the future.
Listened to Original Pirate Material by The Streets at stun volume when I got back to the hotel and felt fully satiated by the events of the evening.Oh life can be so ***** great sometimes.
(November 24, 2002)

Gwen sent one of her bags through the post today which was a lovely surprise.How on earth does she manage to keep so many of her balls in the air? She’s a marvel that woman,I swear she is.She’s headed off to Canada this week to begin filming her first major movie role,Scorsese’s “The Aviator”.What a hoot! Our Gwen, a movie star! I love it.
(August 11th, 2003)

Which brings me to another subject.When is Gwenalicious putting her new record out? I know it’s sometime very soon and I swear I can’t wait to hear it.The last time I saw her she was regalling me with some crazy stories about the making of it and I got very intriuged and excited for her.I hope this new record really explodes although of course I’m sure it will.In my books she’s by far the best and most interesting pop star we’ve got and it’s high time she claimed her glittering throne as pop queen of the world.
(August 25, 2004)

WheeeeeHOoooooo………I just heard Gwenykins single on the radio and it’s ***** GREAT.Pretty weird in a way and I love her for that and of course as usual it’s super hooky. “Take a chance you stupid ho” has been running through my brain ever since I heard it.
(October 11, 2004)

1 thought on “Past Mentions of Gwen by Shirley Manson”