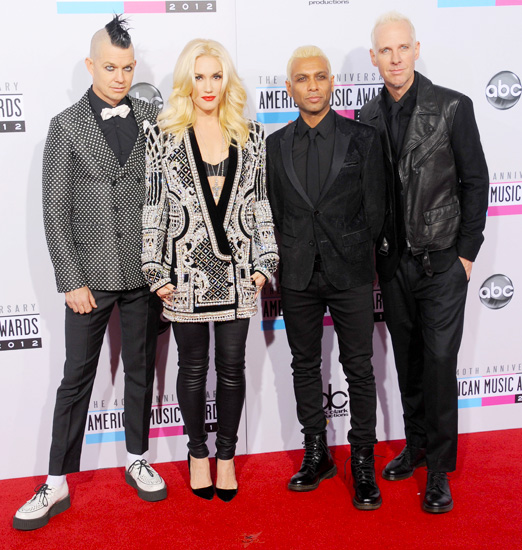 Much congrats to the always-fashionable No Doubt-they have topped MTV Style’s list of the Best Band Style of 2012!!!!

It’s one thing for individuals to have exemplary style. (*ACHEM* If you haven’t voted in our Readers’ Choice: Best Dressed of 2012 poll yet, you should probably do that!) But it’s another thing entirely for a band (of multiple people!) to pull off individual outfits but still look cohesive. With the epic resurgence of boy bands (thanks, One Direction and The Wanted!) and plenty of OG comeback stories, the well-dressed ensemble group was not that rare a thing this year. Thus, we bring you the best band style of 2012.

No Doubt came back in a huge way this year, and is it just us or is Gwen Stefani aging backwards?? We knew her knack for style would never fizzle out (and it’s clear now more than ever), but geez, what kind of hydration plan is this woman on? #needthat But it’s not just Gwen who’s killing it in this group. Check out Tony’s contrast texture lapeled blazer. And Tom’s murdered out ensemble complete with a luscious leather. And don’t even get us started on Adrian’s entire look: black shirt, white bow tie, double-breasted polka dot blazer, sateen finish trousers, and crisp white patent creepers. SO. GOOD.