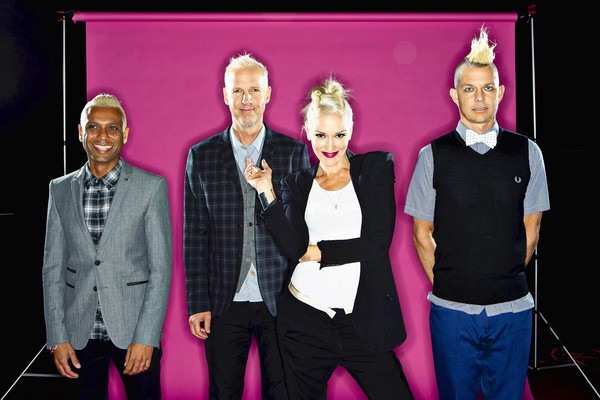 No Doubt may ‘Push and Shove’ its way back to the top
By Randy Lewis, Los Angeles Times

A couple of big questions loom before the members of long-running rock group No Doubt as they prepare to re-enter the fray of contemporary pop music with their first new album in 11 years, “Push and Shove”: Does the world even remember who they are and, if so, does it still care?

“Where do we fit in?” bleach-blond-Mohawk-coiffed drummer Adrian Young, 43, asked during a break in rehearsals recently in Hollywood ahead of a string of high-profile TV appearances the group is making in coming weeks. “I still don’t know. [The first single] ‘Settle Down’ is on the radio right now, but I don’t know where this album is going to fit in. It may carve its own niche.”

Singer Gwen Stefani took an even more pointedly pragmatic view of the question: “Where did we ever fit in?”

That realization spurred frontwoman, main songwriter, fashion designer, cover girl, celebrity mom and solo pop star Stefani to embrace a Zen-like attitude while working for the last 21/2 years with her longtime cohorts on the album they’ll present to the world on Sept. 25.

“It wasn’t like we were trying for anything more than just to enjoy the moment, and to be in the moment,” said Stefani, 42, looking like, well, the rock star she is in a monochromatic black, asymmetrical-collared jacket, white tank top, trim slacks and four-inch silver stiletto heels, her blond hair pulled back in an anarchic ponytail, one small perfect wave curled above her right ear.

“It took so long,” she said. “If we were just waiting for it to be done, it would have been a waste of life.”

To almost any other act, an 11-year gap between albums would constitute several lifetimes outside the fast-churn world of pop music. But No Doubt has remained committedly resilient through a 25-year career that produced one of the cornerstone pop albums of the 1990s in “Tragic Kingdom.” It spent nine weeks at No. 1, and spawned one of the defining singles of the era, “Don’t Speak,” Stefani’s soaring ballad about the dissolution of her seven-year romance with the band’s bassist, Tony Kanal.

“That’s the story of No Doubt,” said Kanal, 42, as he sat across from Stefani. They co-wrote all the lyrics for the new songs — a first in the still-evolving musical partnership that long ago transcended their romantic relationship. “Through all the tough stuff we’ve gone through — and you can name 50 things — we’ve always persevered. And through all those obstacles — it sounds really cliché to say it — but we’ve always come out stronger.”

Is it possible, though, for a band that’s been around this long to exert a significant influence in a world now dominated by the frothy youth pop of Justin Bieber, Katy Perry, Rihanna, Taylor Swift and “American Idol” — none of which existed when No Doubt got started?

In that regard, No Doubt is virtually unique.

“We don’t feel like they’ve ever left, because Gwen is in the forefront of pop culture,” said John Ivey, program director at Southern California Top 40 radio powerhouse KIIS-FM (102.7). “With her and Gavin [Rossdale, Stefani’s rock star husband] and the babies, her [product] endorsements, her clothing line: When you have all that other stuff going for you and your brand is so big, you can be a little bit slower in putting out your music.”

Pop radio isn’t the only place where No Doubt is still generating interest this far down the line: The NFL featured the group during the kickoff game for the 2012 football season, the band performed in July on ABC’s “Good Morning America,” it will launch the two-day I Heart Radio Festival in Las Vegas on Sept. 21 and will visit “The Ellen DeGeneres Show” the week the album drops. It’s also playing six shows Nov. 24 to Dec. 4 at Gibson Amphitheatre.

The album features a cadre of au courant programmers including Anthony Gorry, Jonas Quant and Wayne Wilkins, and Major Lazer and Busy Signal on the title track.

“We wanted it to sound modern,” guitarist Tom Dumont, 44, said, “but we’ve openly said the album is really made up of influences of things we grew up with…. It opens the question of what is modern? When I hear ‘Settle Down’ on the radio, it still doesn’t sound like anything else.”

Getting a hold on it

That’s often been true of No Doubt, the band that sprouted in Anaheim, in the shadow of Disneyland, and for which the next step has rarely come easily, or quickly.

They famously spent 3 1/2 years slaving over “Tragic Kingdom” after their 1992 major-label debut, “No Doubt,” failed to crack the Billboard 200 album chart. It took another five years to release “Return of Saturn” in 2000 — about half that time spent on the “Tragic Kingdom” tour, which mushroomed from what was originally supposed to last just two months.

The exception to the No Doubt rule of protracted creativity came with 2001’s “Rock Steady,” another Top 10 album they cranked out in barely a year.

By that time a bona fide superstar, Stefani requested a breather from the band — not a breakup — to pursue a solo project. That led to 2004’s “Love.Angel.Music.Baby” album, with which she simultaneously launched her L.A.M.B. fashion line.

What was supposed to be a short respite from No Doubt stretched into a second album, 2006’s “The Sweet Escape,” and another solo tour that once again put plans for a new No Doubt record on hold.

“It was all my fault, because I had done too much,” she said. “You need to recharge. You need to have life go by, and I was just racing through it, having done the first solo record, getting pregnant before I went on that tour, touring pregnant until I was 4 1/2 months, having the baby, going back on tour for 100 [more] shows and nursing through the whole [rest of the] tour. And then getting pregnant again the month we were supposed to start the new No Doubt record.

“And,” she added matter-of-factly, “that’s not counting the two [solo] albums I wrote and the clothing lines. It was a lot of output…. Maybe you could [still] be super inspired, but I was depleted.”

After spending most of 2008 struggling unsuccessfully to write new songs, they hit the road in 2009, returning after 58 shows reinvigorated enough to plunge headlong into work on a new album.

“What was so inspiring about that tour,” said Stefani, who like the other three band members moved out of Orange County long ago, “is that it reminded us that we did write these songs together and we do know how to write songs. Now we just have to write about our lives. It just all became clear again.”

The biggest change in their lives over the last decade boils down to one thing: kids. All are now parents of one or more children.