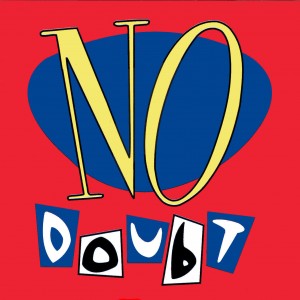 Tomorrow marks the 20th anniversary of the release of No Doubt’s classic self-titled debut album,and many media outlets are honoring the special occasion with tributes to the album. We are loving the attention for the self-titled,especially since it unfortunately was underappreciated by the mainstream media when it was first released-of course,it always has and always will hold a special place in the hearts of fans worldwide.

Speaking of two-decade anniversaries, the album that started it all, No Doubt’s eponymous debut, dropped on March 17, 1992.

No Doubt recorded No Doubt independently, and by 1990, the band was signed by Interscope. The label insisted they rerecord the album, which had no radio singles, and it sold only 30,000 copies–considered a commercial failure. (It was probably because Interscope barely promoted it and refused to finance No Doubt’s tour or release a single.) The band was paid their own way on tour, and they paid for “Trapped in a Box”‘s music video themselves. (Watch it after the jump.)

It’s interesting that the band, formed by John Spence was on vocals and Eric Stefani (Gwen’s brother) on keyboards, has changed so much since its inception as well. Gwen was originally No Doubt’s backup singer, but after Spence committed suicide in 1987, Gwen took over lead vocal duties. (She is also the only person in the band from that original lineup.) After watching No Doubt’s first show at Fender’s Grand International Ballroom, Tony Kanal joined No Doubt as a bassist. Tom Dumont joined them in 1988, after leaving the metal band he played in, and Adrian Young became part of the band a year later.

We had mentioned this Idolator article on our facebook page earlier:

We don’t need to convince you that No Doubt is still a big deal in the pop world. Only a band as beloved as this SoCal group could go over a decade without releasing a new album and remain as popular as ever — just look to their 2009 tour, which sold out venues across North America on the strength of their back catalog of hits, or the obsessive excitement surrounding their highly anticipated sixth studio album, which has been delayed for what feels like eons.

Though most people got tuned in to No Doubt with their massively successful album Tragic Kingdom, the band recorded two rarely-heard, hardly-known LPs before that — 1995’s The Beacon Street Collection, and their self-titled debut from 1992, which celebrates its 20th anniversary this week. (No Doubt dropped on March 17, 1992). On such a pivotal occasion as this, we’re taking a look back at the beginnings of the Orange County ska band that would go on to attain pop domination and inspire a new wave of female-fronted rock bands.

No Doubt was formed in 1987 in Orange County, a breeding ground for rising ska acts along the likes of Reel Big Fish and Sublime. At its humble beginnings, the group held an entirely different lineup from the one we’re all familiar with today: John Spence was on vocals, Eric Stefani on keyboards, and his little sister Gwen, a high-school student who grew up listening to Broadway musicals like The Sound Of Music, provided backup vocals. Here’s the band at their very first official gig at Fender’s Ballroom in Long Beach, CA, on March 14, 1987 (and yes, that’s Gwen in the blonde bob and striped pants) [EIT EDIT-Actually,that photo isn’t from No Doubt’s first gig at Fender’s.]

It would all change, though, when Spence committed suicide in December 1987, briefly causing the band to split up. They soon reformed, with 18-year-old Gwen now handling lead vocals. With the added members of guitarist Tom Dumont, drummer Adrian Young and bassist Tony Kanal (who would secretly date Gwen and then have their relationship not-so-secretly played out on all of Tragic Kingdom), the group performed all around Orange County and Los Angeles, building up a small but loyal fan base from scratch. They recorded their debut album independently, and after a successful industry showcase, they signed with a young label named Interscope.

At Interscope’s insistence, they re-recorded their debut album, but it didn’t lead to much — No Doubt only sold 30,000 copies. You could blame the album’s poor sales on the group’s shiny, upbeat joy that contrasted heavily with the grunge movement that was ruling the airwaves at the time, or the fact that Interscope barely promoted the LP and refused to finance their tour or release a single. The band was forced to pay their own way when they went on the road, and they funded the music video for “Trapped In A Box” themselves.

No Doubt followed up their debut album with 1995’s The Beacon Street Collection, which was recorded in a studio they built themselves. Interscope, disillusioned with the band after the poor sales of their debut, had no involvement in the album. Their sophomore release went on to sell over 100,000 copies, which was enough to impress Interscope and influence them to finance what would become Tragic Kingdom, the band’s breakthrough hit and the one you no doubt (heh) have in your CD collection.

It was with Tragic Kingdom and “Just A Girl” that Stefani would become both a pin-up girl and role model for women who dared to be both feminine and athletic; sensitive, but powerful. No Doubt’s success inspired and paved the way for dozens of other female-fronted rock acts to come, like Garbage, Evanescence, Gossip, Hey Monday, The Sounds and Paramore. (The latter two bands were hand-picked by No Doubt to open for them on their 2009 tour.)

No Doubt hasn’t been totally silent since releasing Rock Steady in 2001 — besides their comeback tour in ‘09, Gwen released two critically praised Top 10 solo albums (2004’s Love. Angel. Music. Baby. and 2006’s The Sweet Escape), Tony Kanal co-wrote and produced tracks on Pink’s Funhouse, and Adrian and Tom have worked on their own side projects.

But no matter the quality of their individual musical creations, we can’t wait to finally hear what this quartet has been cooking up. Will their new tunes be every bit as delectable as the pop-perfect songs they’ve been delivering since their debut? At the risk of saying “no doubt” once again, we’ll just say, you bet.